Pre-90s SF book, four characters (including Elney, Fram and Lady Cleetha) crash-land on an alien planet and learn to survive

I’m looking for a sci-fi book that was already very old back in 1999. The cover has a teal rectangular border and I think an image of a woman with gold or reddish-gold hair on a strange planet with unusual plants. The title of the book is two words written in a pale gold colour, but I can’t remember what they are. The author’s name is in the same font and colour at the bottom of the book. The font was old and sort of curly, it looked like a calligraphy font.

The story is about four characters who crash land on an alien world and have to survive, and I remember three of their names; Elney (female), Fram (male) and Lady Cleetha (female). The fourth was an evil character and I think his name began with an A.

They were all travelling on the same luxury spaceship (I think it was a large ship, like a cruise vessel) when something the evil male character did caused it to be damaged or crash. I can’t recall if they went to the planet’s surface in escape pods or if the ship itself landed on the planet, but I think they were in pods. They were the only four people on the planet, though there was alien flora and fauna, some of it dangerous. They had to work together to survive, but their personalities caused problems.

Lady Cleetha was thin, tall and supposed to be the epitome of beauty in the culture they were from, and I don’t think she was human. She was very fussy and refused to do any work, and wouldn’t eat certain things, and she generally acted quite childishly despite being an adult.

Elney was short, and came across as motherly, and her job (that I think she was raised to do from birth) was to be Lady Cleetha’s body-maiden (I think that was the term). Basically the girl was a living work of art and Elney was her 24-7 caretaker. Elney spent a lot of her time doing things for Cleetha that probably weren’t necessary (like brushing her hair, for hours) and it irritated Fram.

The evil guy was found injured and I think unconscious, and for a lot of the book he’s simply in the background recovering slowly, and they don’t know that he’s responsible for their fate.

The story is mainly told sort of third-person from Fram and Elney’s perspectives, about their various frustrations with each other and with the two they’re looking after. There’s a hint of love interest between them as well.

I think they were living in a cave for a lot of the story, and they had something they moved in front of the entrance for safety. It might have been one of the escape pods.

I’ve tried searching Google and I’m fairly certain that this book was not very popular or common. The author was no one I had heard of (I can’t remember their name). 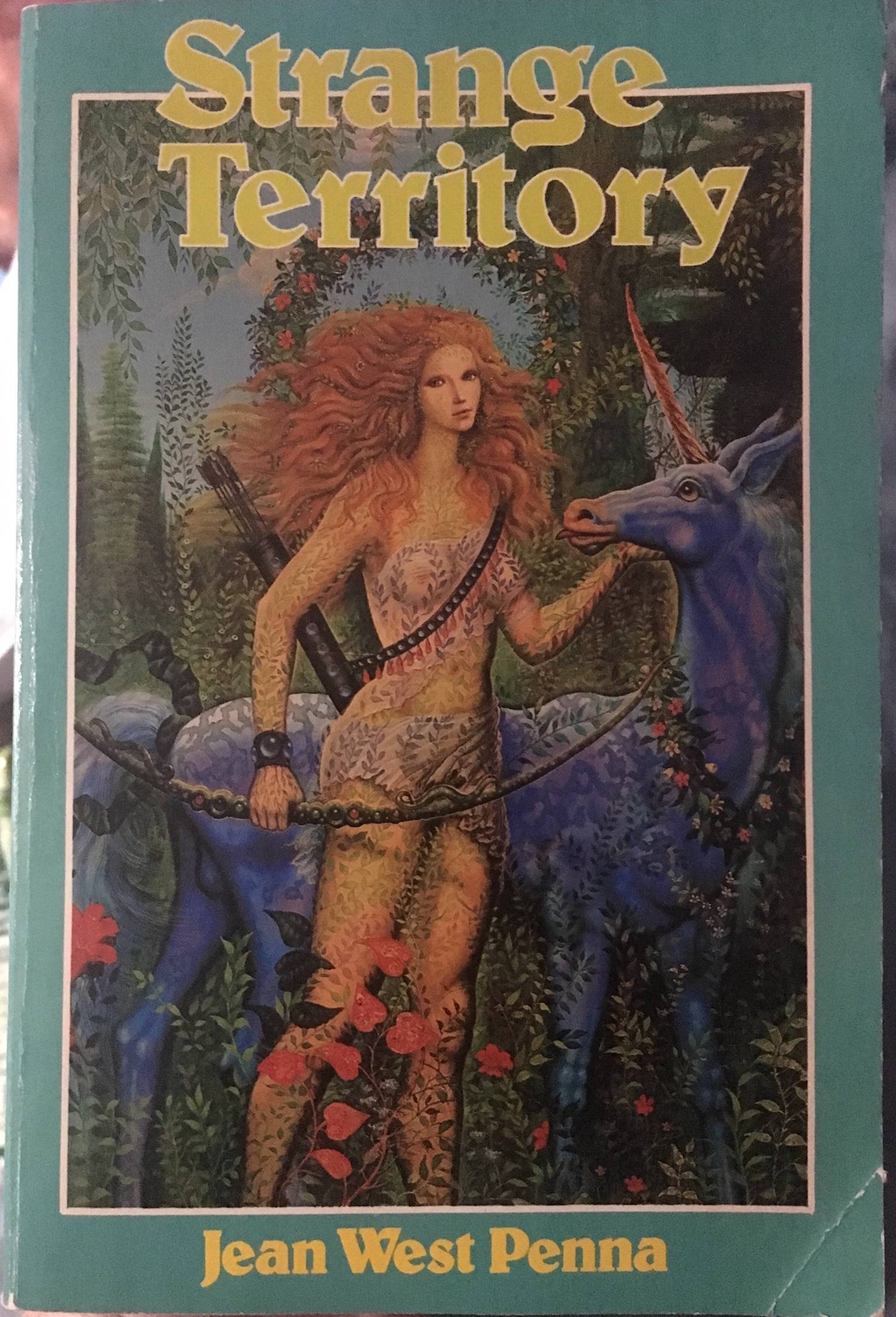 I found it today in a small bookstore in Holbrook, NSW. It turns out the book was published in 1983 in Sydney and Los Angeles by Walrus Books, and the author (Jean West Penna) is so little-known that I only found a few mentions of her online. The book is called Strange Territory, and I got the font slightly wrong (old-fashioned but not curly) and the colour (it’s pale green, like a tennis ball, not gold) and the spelling of one name (Clytha, not Cleetha), but I was pretty close with the rest. The male I didn’t know the name for was Altorr.