How could Ron and Hermione meet Dumbledore in the Entrance Hall?

At the end of Philosopher's Stone Hermione states that she and Ron ran into Dumbledore in the Entrance Hall on their way to the owlery.

“So what happened to you two?” said Harry.
“Well, I got back all right,” said Hermione. “I brought Ron round - that took a while - and we were dashing up to the owlery to contact Dumbledore when we met him in the entrance hall - he already knew - he just said, ‘Harry’s gone after him, hasn’t he?’ and hurtled off to the third floor.”
(Philosopher's Stone, Chapter 17, The Man With Two Faces).

Yet the owlery is described as being at the top of the West Tower (i.e. at the very apex of the castle).

He then climbed out of the portrait hole, up through the silent castle (held up only briefly by Peeves, who tried to overturn a large vase on him halfway along the fourth-floor corridor), finally arriving at the Owlery, which was situated at the top of West Tower.
(Goblet of Fire, Chapter 15, Beauxbatons and Durmstrang).

Ron and Hermione were starting off at the third floor (next to Fluffy). If they were going up to the owlery (presumably without diversion, since they were in a great hurry) why would they end up in the Entrance Hall on the ground floor? Hopefully my highly technical Paint rendering of the castle makes it clear that this was not en route. 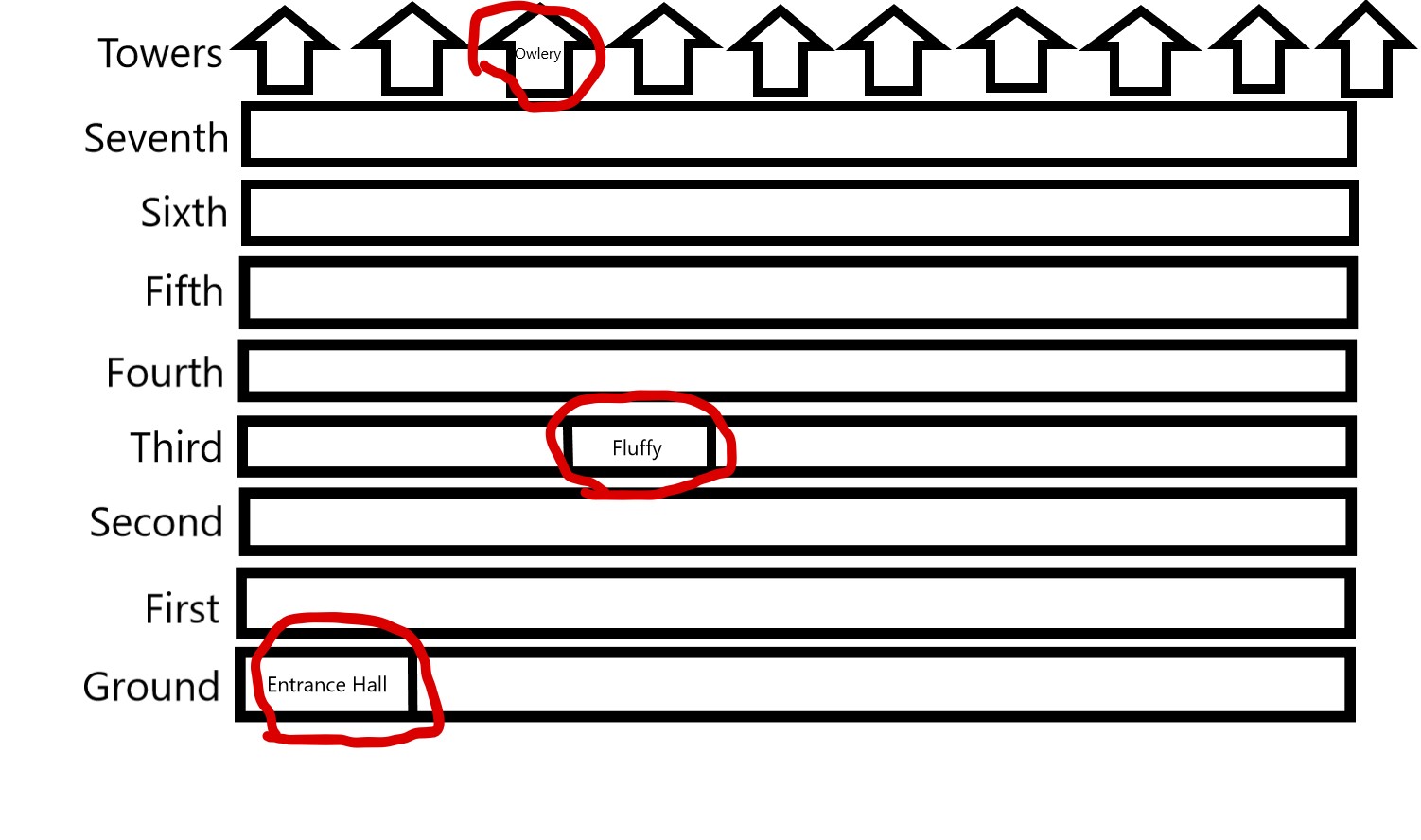 Why were Ron and Hermione in the Entrance Hall in the first place?

It's hard to give a definitive answer to this question, but here are what I think are the two most likely possibilities:

1. On the other hand, the description back at the midnight duel may seem to indicate otherwise:

Ducking under Peeves, they ran for their lives, right to the end of the corridor where they slammed into a door — and it was locked.

Here it appears that they were already in a corridor on the third floor and the door leading to the forbidden area was at the end of the corridor, in which case Dumbledore's terminology may have simply been referring to the part of the corridor beyond the door, which was the right side. However, we can potentially argue against this by noting Peeves's statement immediately prior to this:

There were a hundred and forty-two staircases at Hogwarts: wide, sweeping ones; narrow, rickety ones; some that led somewhere different on a Friday,[...].Then there were doors that wouldn't open unless you asked them politely, or tickled them in exactly the right place,[...]. It was also very hard to remember where anything was, because it all seemed to move around a lot.

The ghosts didn't help, either. [...] Peeves the Poltergeist was worth two locked doors and a trick staircase.

It kinda confirms the obstacle theory of Alex. There are always obstacles in Hogwarts. And sometimes the 'safest' route is the quickest and clearly not the most direct.

74
Why was the "...philosophers stone" retitled to "... the sorcerer's stone" for the US Market?
1
In Harry Potter and the Philospher's (Sorcerer's) Stone, why didn't they send Hedwig to Dumbledore instead of going after Snape (Quirrell)?

14
Why did Harry and Hermione arrive in the Entrance Hall after having used the Time-Turner in the hospital wing?
9
How old was Nicolas Flamel really?
27
Why didn't Quirrell try to kill Ron and Hermione?
12
Why was the entrance to the Stone's dungeon hideout located on the third floor?
2
Why was Hagrid kept waiting for half an hour?
44
If Harry finished the potion, how could Dumbledore get past the black flames?
12
Did the prefects sit separately?
1
In Harry Potter and the Philospher's (Sorcerer's) Stone, why didn't they send Hedwig to Dumbledore instead of going after Snape (Quirrell)?