Bit of a random one.

I have been trying to remember for years now the title of a book that I read some 15-20 years ago.

So it's a British book would have been published mid 80's-90's and was beautifully illustrated.

The synopsis that I can remember is as follows. Apologies if this is a bit rambling.

Society has completely failed as we know it. Towns have kings now and places like Boots aren't chemists, but now apothecaries and society as we know it has gone. Nothing post 1985 and anything that was electric or ran on fuel has stopped.

The "king" of this town's "palace" is a car dealership with Rolls Royces and other lovely cars inside that have never moved. They have no idea what petrol is or where to find it, but the main character thinks it may be some mythical beast that he will need to convince to come with him at one point.

The character then sets off on his quest with his donkey and travels on great roads that have crumbled away to nothing. There are some amazing illustrations that show the motorway signs covered over and bridges and infrastructure falling apart.

He eventually arrives at the city which has taken its influences from the 80s punks and is very concrete jungle-esque. This city has great lumbering beasts, which are 70's design armoured personnel carriers that have been modified to look like mini castles with large paddles of wood that are dropped onto crowds, so there's no guns or anything like that.

Eventually, the main character is captured and taken to the city's king who shows him the petrol in jerry cans. He steals some, and sets fire to the rest, and returns home during the chaos. None of the cars work as they all have dead batteries, but eventually a motorcycle springs into life and the king rides the motorcycle around and marries off his daughter to the main character, and that is the end of the book.

Probably no more than 30-pages and beautifully illustrated.

This is Henry's Quest by Graham Oakley. 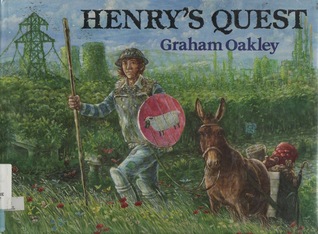 A small kingdom based on the principles of King Arthur's Round Table sends out its knights on a quest for the legendary substance called gasoline.

There are more details (and illustrations) in this Goodreads review:

Yes you heard me correctly.

The story concerns Henry, a shepherd in a chivalric society who takes up the King's quest to find the magical PETROL to win the hand of the princess (who wears a tattered Elvis t-shirt).

The story itself is a bit clever, it probably would go over most children's heads. I discovered this book in the local library at the age of 8 or 9 and while I understood some of the story, I fell in love with the illustrations. Graham Oakley is a wonderful illustrator.

As an adult the joy is still there. The detail in the illustrations makes full use of the decaying remnants of society with cars being used as chicken coops and knights wearing cricket pads and air raid helemts.

This Daily Kos review has more images and plot:

So the following day, Henry and "a bunch of rather well-to-do knights" set out seeking gasoline. Through several pages of pictures, Oakley shows where Henry journeys along his quest. Oakley's imaginative illustrations captures what life could be like in post peak oil Britain on his quest. One of the places he visits is an overgrown Esso oil refinery and a fort built into an overhead powerline tower structure. 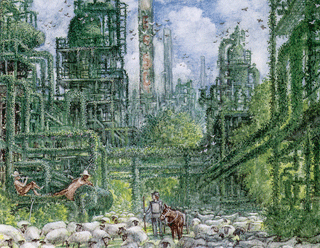 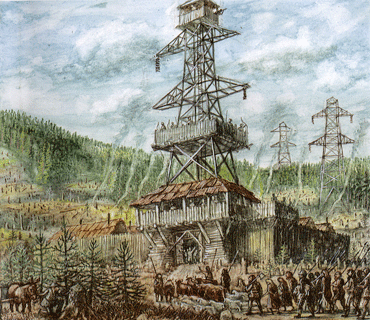 Henry's quest eventually takes him to a great city where gasoline still lurked. The smokestacks in the city belch black clouds of smoke and surrounding the city walls are piles of abandoned automobiles and household appliances. The city is ruled by the emperor as a police state. The citizens are kept amused by the imperial lottery, discos, taverns, casinos, bingo parlors, night clubs and more.

Henry then tells the emperor of his quest for gasoline and the emperor tells him that he has plenty of gasoline and will personally accompany him to the Imperial Gasoline Repository and present him with some gasoline of his own. Plus the emperor would send two of his most trusted servants to assist Henry in bringing the gasoline back to his homeland. Interestingly, Oakley depicts the gasoline repository full of oil drums with USA and USAF stenciled on them.

14
Searching for a specific book set in Paris where the main character kills himself at the end?
5
Looking For an Early 2000s Young Adult Book Involving a Human Boy Raised by Aliens
13
I'm looking for the name of a book series that is centered around an adolescent boy circa 14 in the first book
6
Fantasy book with an adopted son called Boy
14
Looking for a short story about a dystopian future where the surface world is perpetually stuck in traffic and the rich live underground
8
Sci-Fi fantasy book about boy with powers?
6
Fantasy-type manga where the main character defeats the demon king and goes forward in time
8
Book involving superheroes and a rust-like disease. The main character discovers the main villain is his future self