I have searched high and low for this story which I remember reading as a kid. The story involves a robot army which was built thousands of years before the time of the story's events, - during a war - as the ultimate deterrent. It's existence has been forgotten but is hinted at in ancient documents which keep referring to a phrase something like "the legions of night will come at the end"

Millennia later the army is activated - but heads off in the wrong direction because the intended target, which was the enemy's capital city, has moved in the intervening years.

The Regiments of Night by Brian N. Ball 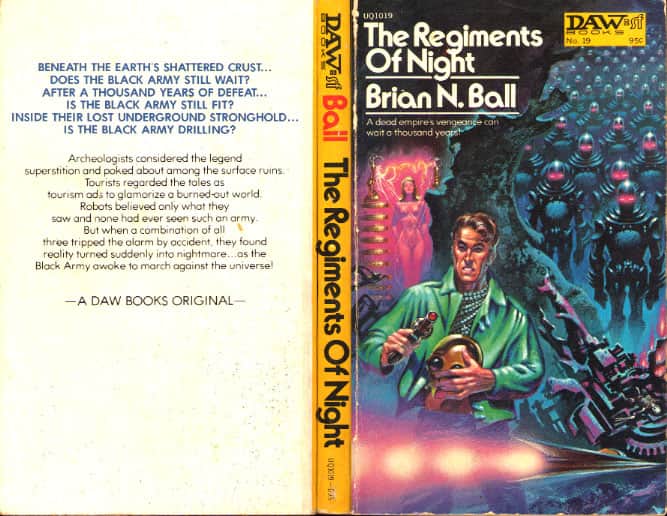 Synopsis
A dead empire's vengeance can wait a thousand years!

Beneath the Earth's shattered crust... does the black army still wait? After a thousand years of defeat... Is the Black Army still fit? Inside their lost underground stronghold... is the Black Army drilling?

Archeologists considered the legend superstition and poked about among the surface ruins. Tourists regarded the tales as tourism ads to glamorize a burned-out world. Robots believed only what they saw and none had ever seen such an army. But when a combination of all three tripped the alarm by accident, they found reality turned suddenly into nightmare... as the Black Army awoke to march against the universe!

Excerpt
"Their crest," the Revived Man said, pointing to the ruins below. "The crest of the second interplanetary confederation."

In spite of the passing of centuries it had survived. Three sunbursts still glowed along one intact radiation shield, the proud emblem of the ancient Empire.

"One for each of the planets they held," said the Brigadier.

"They ruined this one," Khalia siad. "See what it says about the legend." She felt the cold edge of menace.

The Brigadier read out the words with a connoisseur's pride. "Powerful words! Listen! It's just a line, but it's survived for a thousand years. A promise and a threat: "The Regiments of Night shall come at the end."