At the start of Star Trek we see the Kelvin destroyed with its survivors in escape pods and shuttles. The next scene we see a young Kirk on Earth.

Has it ever been detailed how long the survivors sat in space for, did they land on a planet, make there way home themselves or get rescued?

Star Trek (2009) VFX Specialist Douglas E. Graves confirmed that the Kelvin's MedEvac Shuttle (based on the original TOS G7 model) is indeed warp capable. That being that case, and given that the attack took place near to the Federation/Klingon border the escapees needed to merely head toward the nearest friendly Federation outpost.

They may have been picked up along the way (I think we can safely assume that each shuttle has its own subspace radio and distress beacons) but even if they were left to their own devices, they weren't helplessly puttering along at impulse speed.

Q. Just checked out your G7 interiors. I really liked them especially the controls which looked a bit more like TMP style (is that what you’re going for?) than TOS. You’re not kidding when you say it looks cramped and utilitarian, but to me, that just increases the realism of the craft. After all, they’re short range craft aren’t they (warp capable?) and comfort wouldn’t really be much of a concern for the designers.

DEG: My TOS.5 universe is, yes, between TOS and TMP. A lot of those panel are also taken from the NX-01, as I thought they worked quite well for TOS.5. And yes, the shuttles are warp capable.

You can see the earlier concept art on the same site. The film's Concept Artist John Eaves confirms that the bits sticking out are indeed warp nacelles.

Douglas The first pass of the craft has inset nacelles and is basically very rectangular in shape. As Ryan Church was fleshing out the USS Iowa, we thought it would be cool to try a version with a single nacelle on top of the ship to tie in the ship’s design to that of its assigned starship. This idea of architecture went for a while in various forms before we went in a whole different direction and more towards a Galileo style of ship. 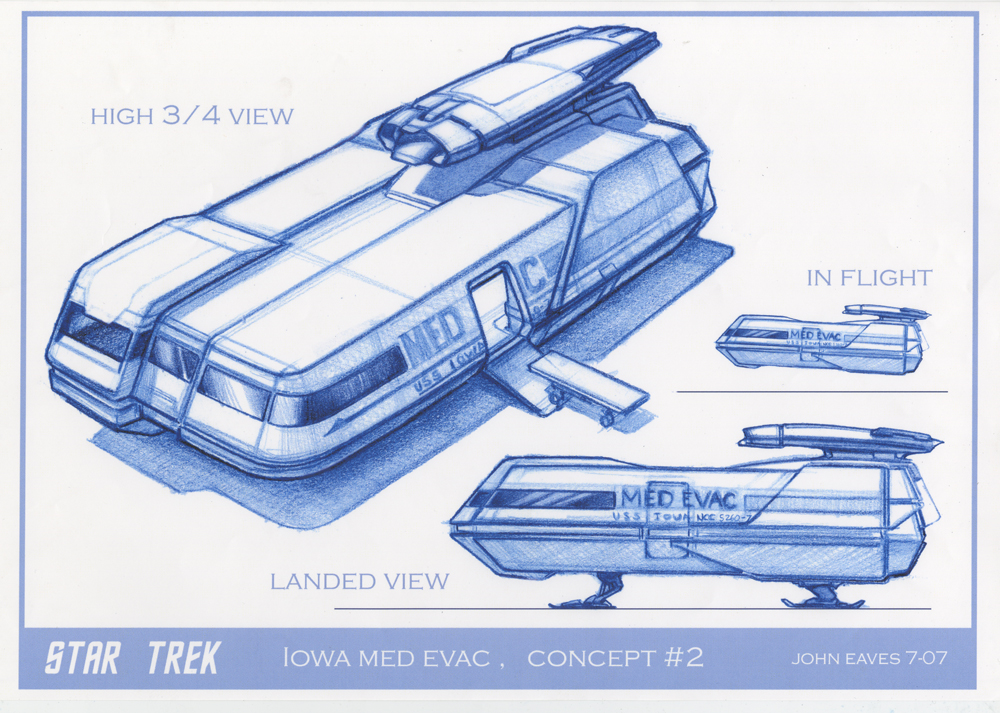 The Kelvin was destroyed along the Federation-Klingon border, an area with a notable amount of Federation activity. There are references to multiple starbases in the area both in the Original Series and in Star Trek: Discovery, including Deep Space KT-7, Starbase 234 and Starbase 24. Considering the shuttlecraft that Winona Kirk escaped in had warp nacelles, even at low speeds reaching one of those starbases would have been possible, and a starship could have picked up the survivors who were in escape pods. As far as I know no official source or novelization addresses the question of how exactly the survivors were rescued, but it does not seem to be a difficult prospect.

50
Why was the Narada drill at all necessary in Star Trek (2009)?
24
How did Kirk get the whales out?
9
What rank was Kirk when he first boarded the Enterprise in Star Trek (2009)?
29
How would Starfleet know what a Romulan looks like in Star Trek 2009?
14
Was Kirk born prematurely in the alternate timeline?
17
What was the probe in Star Trek 4?
20
Why do they use shuttles in Star Trek even for short distances?
10
How is a Kelvin Pod different than a standard Escape pod?
2
Are whales extinct in the Kelvin timeline?
4
What happened to Chekov's confiscated phaser and communicator in Star Trek: The Voyage Home?