Did Poe Dameron make custom modifications to his black X-Wing?

In Star Wars: The Force Awakens and The Last Jedi, it is obvious that Poe Dameron is the coolest X-Wing pilot to have ever existed. He an extremely skilled pilot, but I have a head canon that he has made custom modifications and tweaks that even the Resistance doesn't know about, such as removing inertial dampeners or other modifications, which help his fighter out-perform other X-Wings.

So even if Poe were to fly another X-Wing, he would not be able to fly as well.

Except for the super booster at the beginning of The Last Jedi, is there any canon evidence to support the theory that Poe Dameron's black X-Wing has special modifications which allow it to out-perform the other X-Wings in the fleet?

You're damn right he does. Poe is extremely proud of his customised X-Wing and likes to keep the flight systems just the way he likes them as this maintenance report (from Poe Dameron: Flight Log) shows.

In brief, he likes the thrusters and electromagnetic gyroscopes to be calibrated to his own personal specifications and he likes the flight controls "oiled" and "loose". 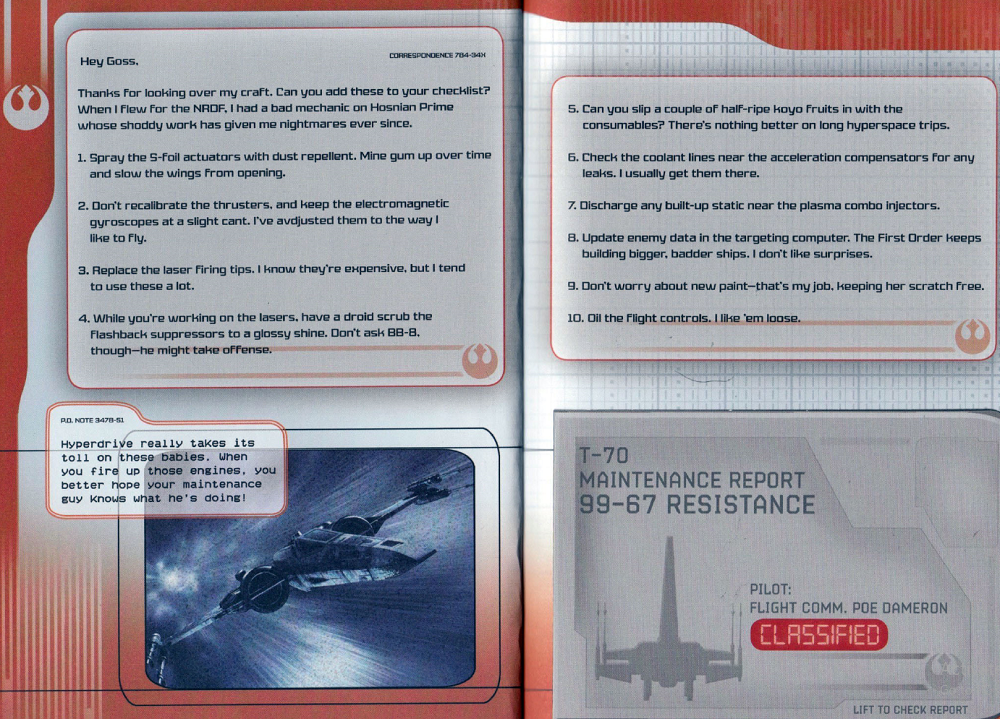 In the Last Jedi novelization, there's a section from BB-8's point of view describing Poe's ship, Black One, as uniquely difficult to work with:

Behind Poe in the starfighter's droid socket, BB-8 was already dealing with a lengthy list of mostly irrelevant alerts from the X-wing's central computer. That was nothing new: Every astromech in the Resistance droid pool could tell you that Black One was a prickly, vainglorious machine.

The Resistance astromechs classified Black One as a high-communications-volume interface. BB-8 searched his memory for an organic equivalent of that classification, and found a high-confidence answer almost immediately.

Black One was a pain in the ass.

However, there's no mention of any physical modifications to the ship, besides the rocket booster on the back.

Not the answer you're looking for? Browse other questions tagged star-wars the-force-awakens poe-dameron or ask your own question.

10
What's different about the new X-Wing fighters?
164
Why are ships in Star Wars so ridiculously easy to steal?
3
Is Poe Dameron Force-Sensitive?
15
Has Poe Dameron's X-Wing been majorly upgraded between The Force Awakens and The Last Jedi?
39
Didn't these two characters from The Last Jedi already meet in The Force Awakens?
24
Where have all the Y-wings gone?
26
Did any non-rebels regularly fly X-Wings?
5
How can Finn pilot this vessel?
9
Does Luke use the same X-wing throughout the movies?