80s/90s Sci fi cartoon with artwork similar to Moebius', with a space journey atmosphere and a blue spaceship flying through the desert

I've got memories of a cartoon, I'm pretty sure I saw it on Cartoon Network a few times very early in the morning but I looked on the wiki list of shows and it's not there. I thought it was called Lazarus but nothing comes up.

I don't remember much except the intro has a rounded blue spaceship flying through the desert, the crew is both human and some alien creatures. The artwork reminds me of Moebius but it's not The Time Masters, it looks kinda similar but a little bit simpler, it also reminds me of The Herculoids for some reason, maybe the colour scheme or setting.

That's really all I know, it would've been on air pre-1995. Definitely not an anime but don't know whether it's American or European. Any help greatly appreciated, remember the show having a really space journey atmosphere, would love to find it.

I would say Spartakus and The Sun Beneath The Sea. The series itself is from the 80's and the scene of a blue vessel travelling above sands matches, plus the artwork is very distinctive 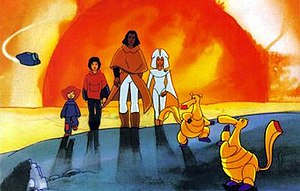 Not the answer you're looking for? Browse other questions tagged story-identification cartoon soft-sci-fi or ask your own question.

4
Unknown VHS sci-fi western-style cartoon movie from the 80s/90s
9
Movie with forest eating the moon?
4
Webcomic (Keenspot?) about an amateur stage magician in a world where magic is real
10
Space cartoon from the 80s or 90s
9
2000's cartoon where a six-fingered pianist gets his extra finger(s?) removed for the girl he likes
7
80s cartoon about a boy stranded on a planet
7
Anime/Cartoon with a Giant Police(?) Robot