How many wings did the Elder Things Have?

When I first read At the Mountains of Madness, I thought that the the description of the Elder Things (known in that story as "Old Ones") must have had almost perfect fivefold radial symmetry, like many modern echinoderms.

The first report of their appearance suggested to me that, along with their other ridges and appendages, the creatures probably had five wings, with one serrated wing folded up in each of the five furrows running along the body.

"10:15 P.M. Important discovery. Orrendorf and Watkins, working underground at 9:45 with light, found monstrous barrel-shaped fossil of wholly unknown nature; probably vegetable unless overgrown specimen of unknown marine radiata. Tissue evidently preserved by mineral salts. Tough as leather, but astonishing flexibility retained in places. Marks of broken-off parts at ends and around sides. Six feet end to end, 3.5 feet central diameter, tapering to 1 foot at each end. Like a barrel with five bulging ridges in place of staves. Lateral breakages, as of thinnish stalks, are at equator in middle of these ridges. In furrows between ridges are curious growths. Combs or wings that fold up and spread out like fans. All greatly damaged but one, which gives almost seven-foot wing spread. Arrangement reminds one of certain monsters of primal myth, especially fabled Elder Things in Necronomicon. These wings seem to be membraneous, stretched on framework of glandular tubing. Apparent minute orifices in frame tubing at wing tips. Ends of body shrivelled, giving no clue to interior or to what has been broken off there. Must dissect when we get back to camp. Can’t decide whether vegetable or animal. Many features obviously of almost incredible primitiveness. Have set all hands cutting stalactites and looking for further specimens. Additional scarred bones found, but these must wait. Having trouble with dogs. They can’t endure the new specimen, and would probably tear it to pieces if we didn’t keep it at a distance from them."

That was still the impression I had when I finished the story, that there were five wings.

However, almost all artistic depictions of the Elder Things seem to show them with just two visible wings. Here is a typical professional rendition of an Elder Thing, from Barlowe's Guide to Extraterrestrials. Wayne Barlowe has definitely given the alien only two wings; there is no room for the other others to be folded up between the creature's ridges. 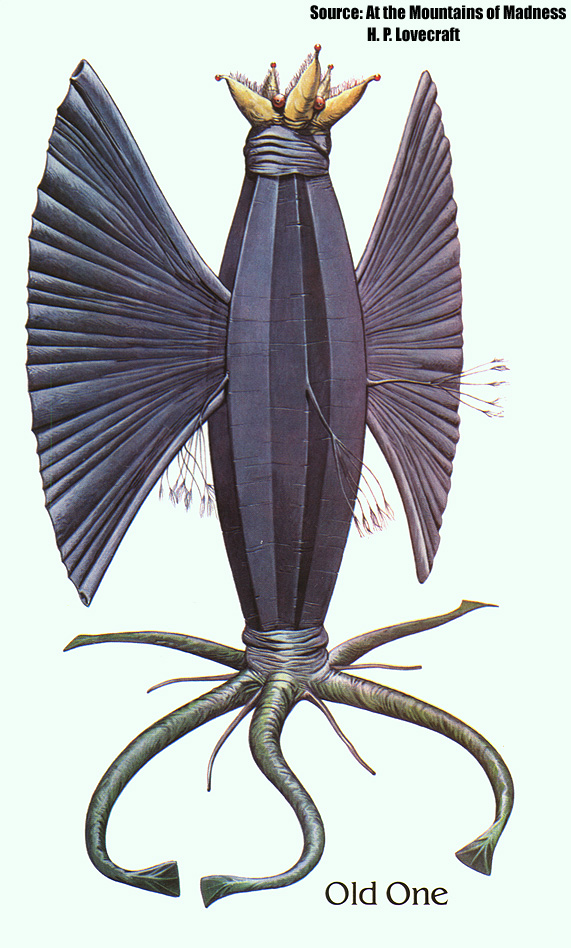 Is there any basis, apart from the fact that flying creatures on Earth have two wings (or four for many insects), to think that the Elder Things had only two wings and not a fully symmetric five?

I just searched the text of the novel again and found this description of the Elder Things' physical capabilities, as inferred from the bas-relief artwork in their city.

The beings moved in the sea partly by swimming—using the lateral crinoid arms—and partly by wriggling with the lower tier of tentacles containing the pseudo-feet. Occasionally they accomplished long swoops with the auxiliary use of two or more sets of their fan-like folding wings. On land they locally used the pseudo-feet, but now and then flew to great heights or over long distances with their wings. The many slender tentacles into which the crinoid arms branched were infinitely delicate, flexible, strong, and accurate in muscular-nervous coördination; ensuring the utmost skill and dexterity in all artistic and other manual operations.

"Two or more sets" definitely indicates that they had more than just two wings.

I always thought that there were five wings and I was shocked that Barlowe depicted only two. I note that his Elder Thing is much thinner than described and has other differences from how I interpreted the descriptions.

As the previous answer cites "Occasionally they accomplished long swoops with the auxiliary use of two or more sets of their fan-like folding wings."

It implies that they had more than two wings, however, not all would be used at a given time. This could explain why artists chose to depict them with two...

Not the answer you're looking for? Browse other questions tagged h-p-lovecraft cthulhu-mythos or ask your own question.

6
Was the illustration of the "Primordial One" in the AD&D Deities and Demigods based on the one from Barlowe's Guide to Extraterrestrials?

47
What influence did H.P. Lovecraft have on science fiction?
6
How could Dr. Willett unsummon this creature in The Case of Charles Dexter Ward?
9
How did the Mi-Go fly through space?
16
Cthulhu Mythos: How does the cult recruit people, if at all?
5
What was the Elder Things' alignment? Good or evil?
11
Did Lovecraft ever explicitly mention any enemies of the Cthulhu?
7
Why did the Laundry allow Lovecraft to publish the truth about Cthulu, etc?
6
How difficult is it to get access to the Necronomicon?
5
How old are the Old Gods in the Cthulhu Mythos?
9
Why did the victims in H.P.Lovecraft's stories happen to be very intelligent?