What are the differences between Spider-man and Ultimate Spider-man?

In Spider-men we see the normal and Ultimate universe Spider-mans meet. The normal Spider-man is surprised by Ultimate Spider-man's venom sting and electrified webs. What other differences in powers do they have, and why is there a difference?

Peter Parker of Ultimate Earth (#1610) was killed and Miles Morales takes his place. Miles gains his powers after a spider affected by a serum created by Oscorp bites him and gives him similar powers to Peter Parker. Parker's blood was used in the serum, so their physical powers are the similar.

Earth-616 Spider-Man has had other powers including organic web-shooters, night vision, and stingers. But with all of the recent reboots of the characters, those powers are in limbo and may no longer be considered canon.

However, the spider which affected Morales gives him additional powers that Spider-Man of Earth 616 does not have including:

Since Spider-Man's gadgets have varied over the decades, they are a much less interesting part of the legend of Spider-Man. Parker has experimented with a variety of technologies and with the help of Tony Stark has quite an exotic suit of powered armor if and when he needs it. Since Morales lives in the Ultimate Universe, he will more than likely end up dealing with or working with the SHIELD of that universe and will be equipped with a variety of tools and weapons they think will work best for him.

As to why there is a difference, the benefit of multiple universes is to allow Marvel's writers to experiment with telling different stories, hopefully in better ways with equally gratifying results.

This really depends on which "Ultimate Spiderman" you are speaking of.

The 616 ("our") Spiderman was bitten by a radioactively mutated spider, in most cases [not counting the inclusion of him as a "Spider totem", and thus giving it a mystical significance.] Generally speaking, his feats have shown him to be stronger, faster, more durable and more experienced than either of the ultimate versions. This should be natural, given that our Spiderman is older [late 20s to early 30s] based on Marvel's sliding timeline, and thus either his powers have developed further, or he's had more practice in maximizing their potential. Either way, he's been shown stopping planes with his legs at one point, so I think its fair to say he can handle a bit more than 20 tons, maxed out. 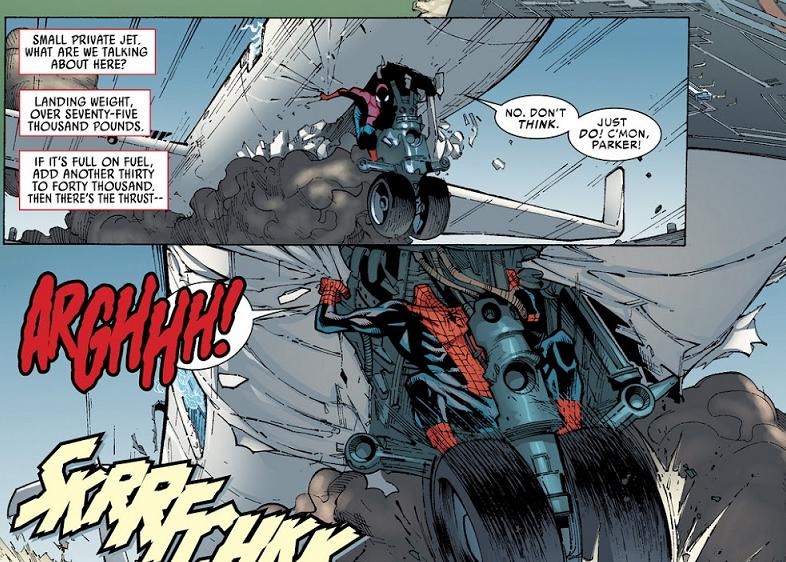 That by itself accounts for some difference, but there is more.

In the Spiderverse crossover, it was stated that Peter's Spider sense was stronger than Miles Morales, but not as strong as the Spider Woman Silk, whose border on psychic visions as opposed to wide range environmental sensitivity/precognition. It should be noted that Spidey and Silk were both bitten by the same radioactive spider as teenagers (which, interestingly enough, makes them both susceptible to each other natural pheromones, which has some... interesting affects.) Why her powers developed different (lesser strength, greater spider sense and natural webbing) is unknown, but could be put down to anything from differences in gender, to genome structure to the spider continuing to mutate.

The Ultimate Peter Parker was the first Spiderman of the Ultimates universe, and he got his powers similarly to "our" Peter (fifteen-year-olds touring a science facility bitten by a super spider), with one key difference; the Ultimates spider was genetically modified not by radiation, but an experimental drug from Oscorp called Oz-0x. This was not the same spider that bit Miles Morales; a new version of the drug was created, tested on a new bug sometime later, and that's how Mile's powers came about.

The Peter of this world, however, was shown to be a bit faster than our Spiderman, but less durable, with a higher metabolism/quicker healing, and way, waaaay weaker (his strength seemed to max out at 8 tons, unless severely pushed, in which he could go to 10). His spider sense was also shown to be someone slower, with Otto Octavius (one of the Oscorp scientists) saying he has developed the capacity of a "long distance runner or triathlete" and a "highly advanced feeling mechanism," so his sense is less "precognition" and more "Extra/boosted sensory input."

Miles Morales, as explained earlier, follows suit to the Ultimate Peter; being younger, he's understandably weaker, but seems to take to his natural agility and quickness much more easily. Miles auxiliary powers (bio-electricity and natural camouflage) can either be put down to the differences in the Oz serum, their different genetic structures, or in the spider itself.