I can't remember when I watched it, but I know it was an OVA (Original Video Animation), something of an indie.

The girl had a "pet" alien that could transform into absolutely anything. I believe her hair stuck up whenever she'd command it to do something/transform into something. The characters also looked pretty normal, no candy-coloured hair from what I can remember.

It ended with a fight with the government or something like that.

I also remember that the anime was incomplete, and that it was going to have a follow-up at some point.

Cencoroll (2009). OP found it themselves and edited it into the question, but never returned to put it as an actual answer.

In Cencoroll, large, mostly white amorphous creatures have been appearing in a town modeled after Sapporo, Hokkaidō, Japan. Tetsu is a male high school student who keeps one such shapeshifting creature named Cenco, which he can control via telepathy, though wants to keep it a secret. An inquisitive girl named Yuki chances upon Cenco at school when it is transformed into a bicycle. After Tetsu arrives to retrieve the bicycle, Yuki inadvertently causes Cenco to transform back into its normally large form by poking it in the eye. Yuki is much more interested in Cenco than Tetsu and accompanies them into town. There, a boy named Shū, who controls two of the creatures, confronts Tetsu in order to obtain Cenco. [...]

Yuki gets Cenco to change control of it from Tetsu to herself, and after Shū's larger creature eats Cenco along with Yuki, she manages to take control of the larger creature as well. They are subsequently attacked by the military with tanks and missiles, but are protected for the time being when Yuki changes the creature's shape to that of a massive walnut. Tetsu and Yuki are separated and Shū attempts to take control back from Yuki, but he cannot control the creature anymore and severs the link, effectively killing it. Tetsu makes it back with Cenco to where Yuki and Shū are, and Yuki knocks Shū out with Cenco transformed into a baseball bat. Afterwards, Yuki transforms Cenco into Tetsu's lost arm, which gives him back control of his limb. Shū is later shown having been rescued by his other creature.

Yuki gets a cowlick evry time she controls Cenco, like this: 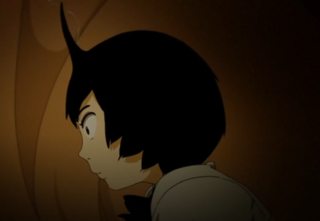 Still according to Wikipedia, part 2 came out in June 2019 and a part 3 should be made at some point.

8
Does anyone remember this old "trapped in a video game" anime?
4
Anime where the main character has a pet squirrel and her friends have powers activated by devices on their wrists
9
Movie with forest eating the moon?
3
Anime in which 4 school children go into a game and rescue the world; they meet a pink-haired girl inside the game who helps them
5
Anime with fighting and magic weapons?
11
Anime Identification - Female mage bitten by small creature
4
French cartoon series where a lava monster fights a noseless, orange-haired guy with a broken sword
5
Animated series with three girls who find magical rings