Great movie where aliens want to call home by way and say there is food here...

As the guest indicated, this is likely the same film as in 80s-90s Scifi movie about miners in the arctic, where the answer was Nightworld: Survivor (1999) 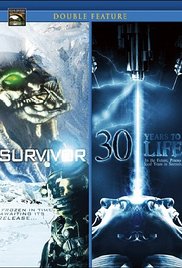 An Alaskan oil rig crew in the middle of the Arctic Tundra hit something while drilling 10 miles beneath the Earth's surface. Instead of oil, a strange blue substance comes through the pipelines. Then when the drill is blown out mysteriously, the radar shows it was pushed out by a 7 foot tall object. One by one crew members are found gruesomely murdered and when they discover what they let loose, they end up fighting for more than their own lives.

The reviews have more information:

This film is an Alien clone even down to the opening credits. Well actually, it's a clone and combo of several sci-fi classics. Is had the plot of "Alien," the setting of "The Thing," and a creature that's a cross between the Predator and the Queen Alien from "Aliens." However, it does have a pretty interesting premise. Turn out that human were bred billions of years ago at the dawn of evolution as harvest for a race of aliens. But the alien crashed and was frozen in the Arctic, and he was perserved until the humans revived him in present day. No kidding. And now he want to finish the job he started: eat us!

1,000,000,000 years ago extraterrestrial beings land on earth which is still devoid of life. One of the aliens is trapped by a volcano eruption and waits patiently until... human beings drill for oil and release it from its underground cave. Soon the usual story unfolds: some want to kill the beast, while others want to make money from the sensational creature, even at the risk of everyone's life. Although the elements of the movie are obviously taken from "Alien" (evil corporation), "Predator" (just look at the creature) and "The Thing" (isolated station in Antarctica), this is a better monster movie than some others. It has at least one good story idea: the monster carries a blue healing glue and sometimes doesn't seem hostile despite the kills. Well, it surely must know everything about longevity!

4
80s-90s Scifi movie about miners in the arctic

5
Movie identification:scientists study a flying saucer and try to make it fly (70s or early 80s)
9
Scifi movie where an alien has a baby on a bus
5
Movie with "Small Soldiers"-like (but scarier) toys possessed by alien/ghosts, evil toy drills a hole into another toy's head
9
Movie where a man is injected with alien DNA that heals his wounds
4
80s TV show about kids with psychic powers saving the world from shapeshifting aliens
11
Movie from the 80's/90's with a deadly virus that makes people spew virulent goo