What is the complete list of ships in the Futurama Mobius Dick graveyard for us die hard scifi fans?

In the episode Möbius Dick, the Planet Express crew travel trough a spaceship graveyard in Bermuda Tetrahedron. You could watch a video of this scene on comedycentral.com.

We have confirmed 13 of the ships and the rest look enticingly familiar but there are 60 years of shows to know and it's frustrating. Help out a scifi fan of many years but worsening memory, please!

As commented by OrionDarkwood, The Info Sphere lists some of them. Those in italics you already have, those in bold you don't.

The Garmin and TomTom aren't pointed out but are mentioned by Hermes in the video, and I think the suggestion is they were spaceships that got lost rather than satellites.

Wikipedia adds nothing new, other to point out the Apollo Lunar Module has ascent and descent stages still attached, and the Futurama Wiki lists none.

I don't think there were any ringed space station in Silent Runnings.

I'm not sure if this is correct, but a post on the Straight Dope Message Board:

I couldn't tell from the resolution of the picture onscreen, but I'm pretty sure there was also an old Type 40 Galifreyan TARDIS in the shape of a Police box there as well...

Finally, there's a green ship (in the centre of the first screenshot and right side of the second) that looks a bit like Thunderbird 2 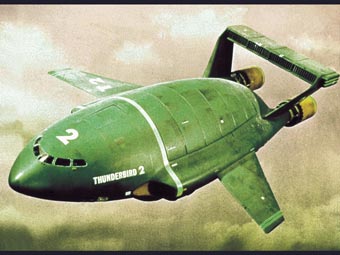 The yellow and red one on the bottom left corner looks like the ship from "Earth Girls are Easy."

Not the answer you're looking for? Browse other questions tagged futurama object-identification or ask your own question.