About 5 or 6 years ago (I think), so sometime between 2012 and 2015, I caught most of the first episode of a dark new TV drama series. The episode began with men from an unknown organisation breaking into a family home to kill a child. As far as I recall, that child (or another) spoke at one point as if an adult in a child's body, making threats and hinting at old, secret knowledge. The episode seemed to suggest the existence of a secret group of people who were living on by serially taking over the lives of children - at least, that was my guess.

I wasn't able to see the whole episode because of various interruptions. I assumed I'd be able to catch up with it later but never found the time and that was a busy and disruptive time in my life. By the time I remembered the show, I had forgotten the title.

I'm pretty sure it was meant to be a one-off mini-series.

You may be thinking of the 8 episode series; Intruders, made by the BBC and shown on BBC America in 2014. It starred John Simm as a police detective. It had Milly Bobbie Brown as a 9 year old girl, Madison, who's possessed by the soul of Marcus Fox, a serial killer. I believe assassins are sent after her to prevent Fox from "waking up" and there are a number of scenes where he's speaking as her. And there is the secret society, Qui Reverti, whose members seek immortality by taking over the bodies of others. 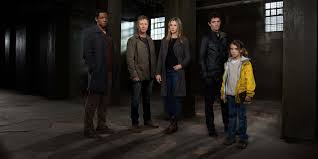 3
Shifter book series with the alpha's daughter as the main character through out the series
4
YA novel with child, talking cat, and airships, bearded man, battle with long-barreled rifles
9
Story about Angels in Revolution-era United States
7
Book series with people transported through time by magic
1
Animated series with jump-through portals
9
80/90s UK children's drama series about an “alien” boy with radio weapon
6
TV series with alien larvae that infect humans through their eyes and turn them into blood drinkers