This is really vague, I'm afraid.

I read it at least forty years ago, my memory says novella but it could have been a full book back in those days.

What I recall: A war is ongoing, I think on another world but it could be Earth. Futuristic weapons such as laser rifles and the good old sci fi fave 'blasters' are used. For some reason the battles are in trenches like WW1.

A key part of the story were 'cling-mines'. Once the wire is tripped these things cruise slowly about three feet in the air and are programmed to track body heat. Then they hook into the middle of your back - they explode if you try to remove and they explode anyway after a random number of minutes.

Descriptions of battles and charges. Here and there, on both sides, there are scenes with scattered men walking grimly towards the enemy. They have been cling-mined and are striving to take some opponents with them at boom boom time.

I think one of the main protagonists gets caught by one and calls a hasty farewell as he marches away from his comrades. I think he was praying for an enemy bullet so he wouldn't shame himself by shrieking in terror.

Edit:- This story has now been identified (thank you Winchell Chung!) and I was mistaken about 'Cling-mines' ... They were in fact called Chase Bombs 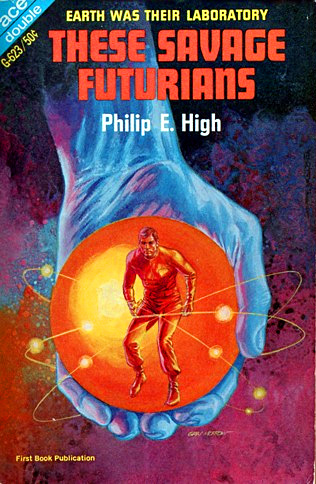 “That black tube on that stone over there is a chase-bomb. That, too, would kill you.”

Stein did not go into the details of the chase-bomb. In his considered opinion it was the most diabolical weapon the human mind had ever conceived. Like most of the weapons of a dying culture, it was micro-constructed and justified its existence—if such a weapon could be justified—as a psychological deterent.

The chase-bomb, once activated by body-heat, would rise with a whining sound and pursue its victim at slightly less than normal running speed. Sooner or later, of course, exhaustion would cause the condemned victim to lose the necessary speed and then the bomb would affix itself almost painlessly to his back.

There was no telling when it would blow, it might be six hours or six weeks. Any attempt to remove the bomb by any known means resulted in its immediate detonation so the victim became an outcast.

Understandably, an army, with twenty or thirty such carriers, among its units became completely demoralized. Even the desperate, if merciful, shooting of the carrier, only caused the bomb to fall off and lie in wait for the next victim.

They rose to the crouching position again and went on. Then, behind them, a voice shouted: “Clearway—carriers! Stand clear—carriers!”

The line broke, scuttling from left to right, throwing themselves desperately flat. Three men passed between them unhurriedly, blank-faced, crouching only from the steepness of the slope. All carried conventional weapons but they seemed to scorn cover. They went steadily ahead, silent, with a kind of blind unfaltering determination.

A man near Lansom raised his head slightly and his mouth twisted. “Get well up there, boys. We don’t want you copping a packet half-way and rolling back on us.”

Lansom was not shocked by the man’s crudeness. In part he shared his feelings—the three men were doomed anyway. Between the shoulder blades of each one was the black leech-blob of a chase-mine.

Lansom thought, briefly, that they’d learned a lot since the Charing campaign. Then, those damn chase-bombs had demoralized them completely but the bitterness of defeat had taught them other methods. They called it the Kamikaze technique—a carrier, knowing he was doomed, simply stood up and walked into the enemy lines.

Lansom smiled bitterly, and that exquisite touch had carved up the enemy’s morale more than their own. Their own lovely little weapon had bounced back right in their faces.