Story about a 'synthetic' humanoid with superpowers

This man is imprisoned on a desert type planet from which he eventually escapes, and finds his way across the stars to a laboratory run by a scientist who created him as a silicon man. This lab also has a doorway to another dimension, in which the silicon man is imbued with super powers. He discovers a 'damsel in distress' there, being held captive by a monster. The silicon man eventually destroys the monster, rescues the damsel, and lives happily ever after? I read this story in the 1962-1965 time period as a paperback novel, possibly one of the ACE doubles popular back then.

Building up on my comment. I believe the book you're looking for is Escape Across the Cosmos by Gardner Fox (or possibly one of the plagiarized editions) published in 1964. It has the man, Kael Carrick, imprisoned on the desert type planet for falsely being accused of murdering the scientist who had healed him by replacing his organs with silicon ones. He finds his way back to the lab where it was done. Only half remembering the damsel in distress an another dimension. 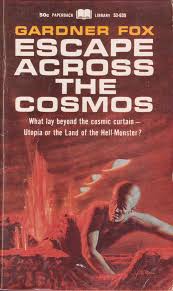 Not the answer you're looking for? Browse other questions tagged story-identification androids or ask your own question.