Was Ursa a bender?

She was granddaughter of the Avatar and mother to Azula and Zuko, both powerful benders but I don't recall if she's ever stated to be a bender or nonbender herself. Is this ever confirmed in the comics?

Probably not. Ursa is never shown to be capable of bending in any of her appearances in the animated series and the comics. It's true that she was descended from Avatar Roku, which was why she was chosen to marry Ozai, but the Avatar's descendants are not guaranteed to be benders. While two of Aang's children were benders, his son Bumi was not.

As far as I can remember, Ursa never used any kind of bending in the comics, nor was it implied that she could do such a thing. However, she did carry some "bending genes", as seen in the The Search and Smoke and Shadow comic, where

she had a third child, Kiyi, with the "commoner" Ikem (who's definitely not a firebender - he was attacked by firebenders and fought with swords). Kiyi was revealed in the third issue of Smoke and Shadow to be a firebender. 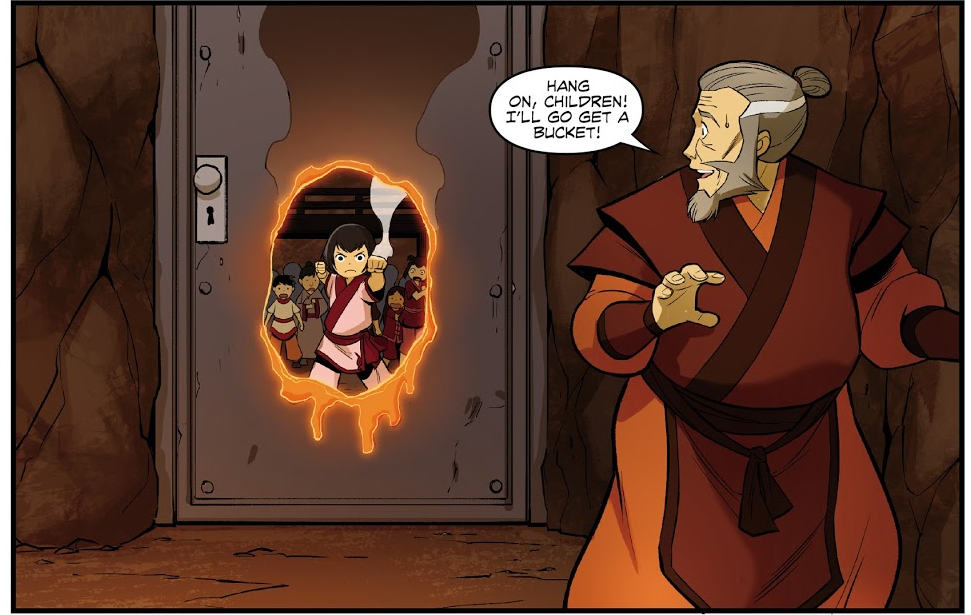 Obviously Zuko and Azula were benders too, but you could have argued that Ozai was a bender to begin with, so that could have stemed from here.

As the other answer mentions, though, obviously not all Avatar descendants are granted to be benders.

5
Why it was so important for Bumi that Momo was with Aang while he was preparing for the final battle?
11
How does each bender produce his or her element?
7
Can Aang (or Korra) make a non-bender into a bender?
3
Why did Ozai confront Ursa (The Search Part 2)
9
How would people set up a prison for an air bender?
8
Apart from Azula, has there ever been a Fire Bender with Blue Fire?
6
How was Ursa's absence explained by Ozai?
5
What nationality was Guru Pathik (from a biological perspective)?
2
Can a non-bender take a piece of the Eternal Flame?