Short story about humans on a hostile planet, genetically engineering their offspring gradually over generations, to be able to survive on it [duplicate]

This was a short story I read sometime before 2000, most likely sometime between 1981 and 1995. It was collected in a paperback with other stories, which I believe (but am not sure) were by separate authors. I also believe (but am not sure) that the cover of the paperback was pink. I may have checked out the book from the public library, which means the book itself could have been arbitrarily old.

On a planet with a hostile atmosphere, there are humans living within a dome or some other artificial environment. Each generation genetically engineers the next generation to be closer to being able to live outside the dome. At the end of the story (and perhaps also the beginning of the story—I'm not sure how much time elapses during the narrative) the final generation is almost ready to be released into the wild, but they are strong (with a low, dense, non-humanoid body shape) and out of control, and they risk damaging (or actually do damage) the dome and therefore the lives of the older generations. The young ones will survive and thrive on the planet, the older ones think to themselves with pride, even if the rest of us must parish.

The subtext of the story is that while the youngsters may technically be human (in the sense of DNA), they are no longer human from any meaningful point of view. The reader is left questioning the wisdom of their plan.

Maybe the first generation engineers all the subsequent generations, instead of each engineering the next. That's not how I remember it, but if each generation engineered the next, then the penultimate generation would be not human enough to convey the subtext. Also, the final generation is wild, presumably lacking any kind of education or technical know-how, so presumably the penultimate generation would be close enough to wild that they wouldn't be able to genetically engineer anything. This IMHO would make it hard for the author to pull off each-generation-engineers-the-next, but maybe she or he was able to.

Maybe "Between the Dark and the Daylight" (1958) by Algis Budrys. The story is available at the Internet Archive here (link courtesy of @user14111).

A human spaceship crashlands on a planet where conditions are inimical to human life - including a hostile sentient native species. So the humans build a large enclosure for themselves and undergo induced mutations so each succeeding generation is better adjusted to conditions on the planet than the last until finally the last generation is ready to step out of the enclosure.

It was collected in Budrys' Inferno (1963) which had a pink cover: 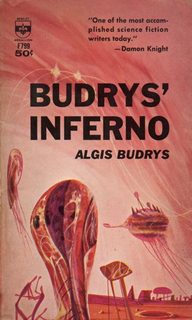 At the end of the story [...] the final generation is almost ready to be released into the wild, but they are strong (with a low, dense, non-humanoid body shape) and out of control, and risk damaging (or actually do damage) the dome and therefore the lives of the older generations.

The older generations knew very well what was going to happen; the new generation being so aggressive they would end up killing their elders. Quote snatched (again!) from user14111's answer to story identification - suicidal breeding of aggresive next generation on generation ship

There was a new sound echoing through the dome. "Now they don't need us to let them out, anymore." There was a quick, sharp, deep hammering from outside—mechanical, purposeful, tireless. "That . . . that may be Donel now."

Found by searching this very site for [story-identification] dome generation which returned, among others, A mutation-themed short story from the 60s or 70s which I shamelessly copied.

There has been something familiar about this question bouncing around in my head, and it finally struck me what this reminded me of. So I am providing this as an answer for posterity, even though I know it is not the specific story that the the asker was looking for.

The described scenario resembles in many respects the (original) origin story for Superman's deadliest enemy, Doomsday. This was laid out in issue 2 of the Superman/Doomsday: Hunter/Prey miniseries. (Caveat lector: The circumstances surrounding this origin have seen been subject to repeated retcons, so the biography of Doomsday given in the first Wikipedia page I linked to does not correspond precisely to the origin story first given in Hunter/Prey.)

This issue tells how the unstoppable monster Doomsday originated. A group of alien scientists, led by the enigmatic Betron, are living in a domed laboratory on an incredibly dangerous planet. Betron is manufacturing a "Ultimate" being, capable of surviving the rigors of the planet, by sending out successive clone generations of a new race; each clone is killed, and the next one adapts to be better able to survive. Eventually, the clones develop the capability to survive the natural environment, then to slay all the hostile fauna present on the planet. The final Doomsday eventually breaks into the scientists' dome and destroys them all.

8
Story about suicidal breeding of aggressive next generation on generation ship
10
Planetary colonization by human modification
6
A mutation-themed short story from the 60s or 70s
9
Short story: Earth covered in germs after biological war, patriotic amoebas descended from humanity