How did Shipwreck Cove come to be?

I was recently rewatching Pirates of the Caribbean: At Worlds End, where the fourth Brethren Court convenes at location [aptly] called, Shipwreck Cove. 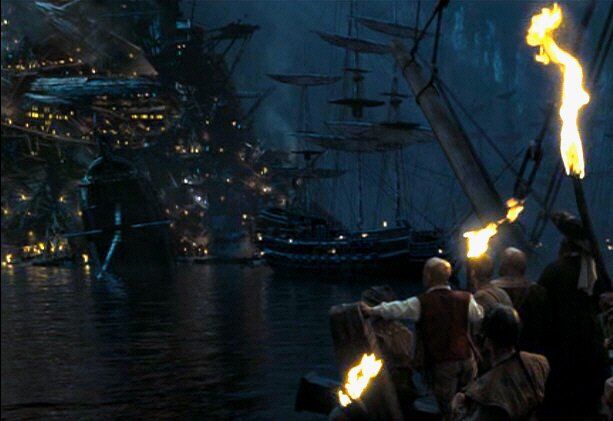 Is there any backstory as to how this location, which literally consists of the wrecks of ships, came to be?

Secondary Questions to better explain my meaning: Are the ships naturally situated, are/were there architects, or was any magic used to make this place usable?

There's no in-universe description of the Cove's history, but we do get this snippet in the press-kit that was released in advance of the film. In short it would appear that pirates who've passed their sell-by dates can retire to the island. When they do so, they shove their (now unneeded) ships into the Shipwreck Cove.

The last of the fabulous sets built on Disney’s Stage 2 for the “Pirates” trilogy was Shipwreck Cove, where the raucous and divisive Brethren Court of Pirate Lords meets to make a last plan of action against the onslaughts of Beckett and the East India Trading Company armada. “Shipwreck Cove was conceived by Gore as kind of a retirement home for old pirates, comprised of the wrecked hulls of various ships hidden in a volcano,” notes Heinrichs. “The Brethren Court meet in one of those hulls, and outside of the structure we’ve extended the set with a 300-foot-long painted backing which has been beautifully designed and painted in the good, old-fashioned Hollywood tradition.”

The Brethren Court does have some foundation in history, note the screenwriters. “There was a loose confederation of pirates called the Brethren of the Coast,” says Ted Elliott. “And it’s just such a fun idea to have a whole bunch of pirates sitting around trying to come to decisions. Captain Sao Feng has a line of dialogue in which he says that pirates are either captain or crew, and nine captains charting a course is eight captains too many. We also wanted to get more international in flavor, so the Pirate Lords are from all over the world.”

Not the answer you're looking for? Browse other questions tagged pirates-of-the-caribbean at-worlds-end or ask your own question.

10
How did the Kraken die?
20
Why did Davy Jones' little white crabs help Jack escape from Davy Jones Locker?
17
Did Will neglect his duty of ferrying the dead?
5
When did Jack Sparrow get the cheek/jaw scar?
14
How did Gibbs become a pirate?
9
Why did Will's heart need to go into the dead man's chest?
3
Why did Lord Beckett expect them to sing?