I would like to identify a SF book (possibly a part of a series) which I read in late 80s or in the 90s. What I remember from the story:

This is all I remember - I think I have borrowed the book from a local library. I would be grateful for any help.

City of Illusions by Ursula K. Le Guin. One of her earlier novels; first published in 1967. It is part of a science fiction series which is sometimes called "The Hainish Cycle." (But this was a very loosely-connected "series" -- the idea was that several of her stories could all be considered part of one "future history," but the typical story was completely self-contained and used its own set of characters. Instead of being a "series" in the same way the Honor Harrington books by David Weber are one ongoing series about the main heroine and her friends and relatives.)

It has had many editions (and sometimes been packaged with other novels in omnibus editions), but here's a scan of the cover art of one of its paperback reprints: 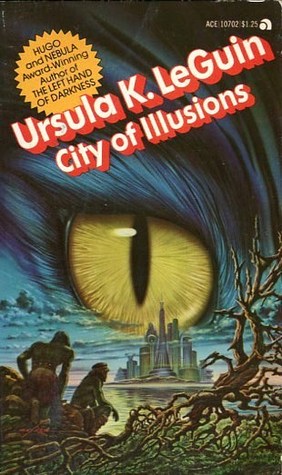 Your memory of some of the major plot points is pretty accurate. The story is set on Earth. The planet has been dominated for centuries by an alien race called the Shing. They have telepathic powers which, among other things, make them masters of illusion. (The title of the novel refers to the city in the Rocky Mountains which is their headquarters here on Earth.) Surviving human tribes have generally reverted back to pre-industrial levels of technology, as I recall.

The protagonist wakes up in the woods with total amnesia. The people who find him call him "Falk," and he uses that name for much of the novel. We eventually learn that the Shing had somehow wiped out (or totally suppressed, anyway) his old memories to make him a blank slate. This was after they captured the crew of a ship which had come from the planet Werel to investigate conditions on Earth.

The Werelians tend to be human/alien hybrids who are themselves very strong and skilled in telepathic operations, and they are high-tech and could easily send a strong military force to fight to reclaim control of Earth for humanity . . . if they knew this needed to be done. Thus, as you said, when the ship arrived in local space, the Shing definitely did not want to let it escape to carry the word back to Werel. I don't remember exactly how they had damaged or captured it, but they had. (LeGuin worked on the assumption that no starship could travel faster than light, and Werel was at least a couple of hundred light years away, so the Shing knew it might be centuries before the Werelians got around to sending a second ship to find out why they still hadn't heard back from the first one.)

Eventually Falk falls into the hands of the Shing, who solemnly assure him that it was a small faction of rebels who originally wiped his memory, but the benevolent Shing (who claim to be quite human, despite any nasty rumors he has heard to the contrary) only want what is best for everyone, and will be glad to try to use their special skills to awaken his old self. But they will only do that if he volunteers to submit to the process. (Which, just incidentally, will supposedly mean destroying the personality and memories of "Falk," so that his restored self won't share his deep suspicions regarding the Shing.)

Falk believes they are only offering to revive his old personality because they desperately need to know the coordinates of Werel, and they can't find any other way to learn which of many possible stars it orbits. (The crew of the Werelian ship apparently were extremely security-conscious about such things.) Falk has an idea about a way to outwit the Shing, though, and thus agrees to go through this restoration process. In the end, as you remembered, both sets of memories are wide awake within the same body, and the hero finds a way to grab a lightspeed vessel and head back to Werel to spread the word about the sad plight of humanity's homeworld.

16
The homesick space pilot
7
Trying to identify novel with a man imbued with uncontrollable telepathy
16
Old sci-fi short story where protagonist is the lone survivor of a space passenger vessel that crashes on a semi-hostile planet?
9
Looking for a book - an exploration group sent to a rogue planet from a dead alien civilization
13
Framed and sent to a prison planet, learns to hunt large native creatures
5
1950s-1979 young adult novel about a boy traveling through world which turns out to be a spaceship
7
Eerie stop-motion short film about a character with amnesia in underground, concrete tunnels
15
Novel with a modified space shuttle seeding a colony on another planet