How much of Thor's power could Rogue steal?

While my experience with the comics are very limited, Rogue has been one of my favorite X-Men since the Animated Series was on TV when I was a kid. The capability of absorbing an enemy's strengths and using them against them has always been just awesomely cool to me.

My question is fairly simple: if Rogue fought Thor, and stole his powers, what would she be able to do?

I know in various media, Rogue has been shown to absorb memories and even personality quirks from people when she steals their powers. Would that be enough to overcome Mjolnir's enchantment? Would she be able to wield Mjolnir, or is the enchantment smarter than that? Would she gain his immortality/physical strength? His control over lighting and storms?

I'll accept answers from any Marvel approved media in which this matchup has occurred. If it hasn't (which would be honestly surprising), I'm game for good speculative answers.

On Earth-616, Thor and Rogue fought in Avengers Annual #10. She absorbed his physical powers but did not try to pick up his hammer. But having his physical abilities would, at that moment, certainly not have made her worthy.

This was her first meeting with the Avengers and she was trashing them because of her affiliation with the Brotherhood of Evil Mutants. It would be unlikely she would have been able to lift it under those conditions. 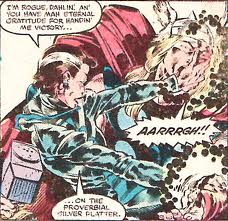 Rogue was able to steal his physical strength and stamina, that was certain. She stands up to a direct venom blast from Spiderwoman, knocks Wonder Man on his butt and holds her own against the Vision and Hawkeye. She had already taken out Captain America and was channeling his power too. It has never been clearly established what the criteria for her power absorption is, or what its limits are.

If she were to engage in a prolonged contact (as she did with Ms. Marvel) it is conceivable she would possess any power Thor had that did not involve Mjolnir to invoke including his storm-summoning, his incredible regenerative and recuperative powers, and perhaps any powers he gains from being the son of Odin and Jord (Gaia). If her power included any memory or training, she would also be able to use his thousands of years of combat expertise as well.

Caveat: Despite the fact Marvel depicts Rogue absorbing Thor's powers/lifeforce in What If? Vol. 2, Issue 66 and being able to wield Mjolnir, in the canon Earth-616, Rogue has never shown the character, nobility, or level of innate goodness that would give her the power to use Mjolnir. As the joke goes, the users of Mjolnir would be a gathering of the sons of Bor and Captain America; a pretty unique group to be sure. 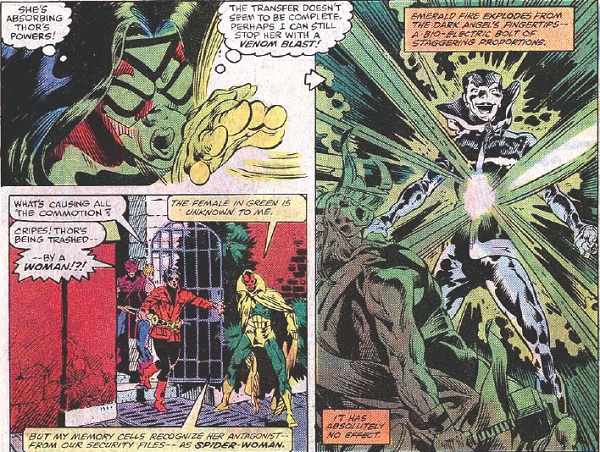 The idea was interesting enough to be used in What If? Vol 2 66, it look like she absorbed all of Thor's powers.

During a battle with the Avengers in an attempt to free the Freedom Force from jail, Rogue absorbs all of Thor's powers [...] Rogue meets Thor on the astral plane who encourages her to take on his old role. She realizes that the Goddess of Thunder is her identity and she must hold herself to those standards. [...] She accepts her new role as the new Thor and Odin accepts her as his new daughter. 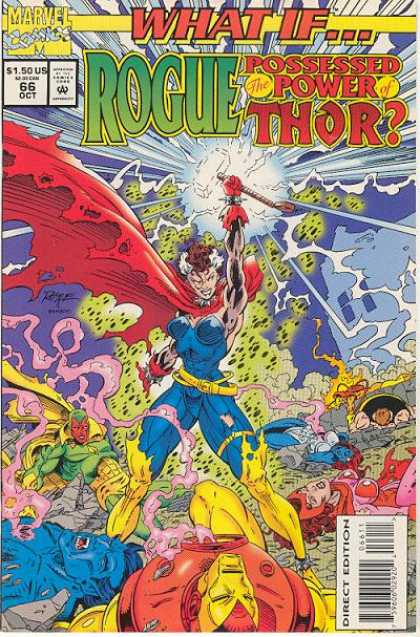 No, but her very first appearance does. She absorbed all of Thor's personal power, leaving him unconscious, although she left Mjolnir alone. Worked just fine on him.

Rogue can apparently absorb all the power that Thor possesses within his body...

... but this does not extend to the ability to lift Thor's hammer, Mjolnir.

In Contest of Champions II #5, the Brood Queen took control of Rogue's body, and used it to absorb the powers of several heroes, including Thor. Despite this, she proved unable to lift Mjolnir, presumably, because she wasn't worthy. She noted, however, that she still possessed Thor's strength, and his "command over the elements". 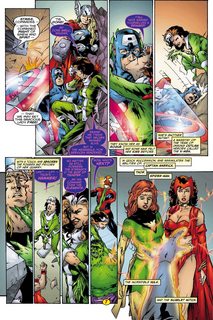 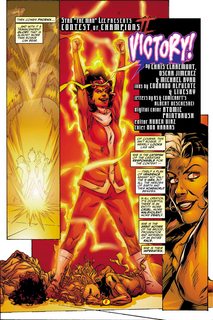 Not the answer you're looking for? Browse other questions tagged marvel x-men thor-marvel rogue or ask your own question.

26
How much would Thor's hammer (Mjolnir) weigh?
39
How does Thor's flight work exactly?
12
Does Rogue ever take advantage of the removable power suppression we see?
3
When/how did the marauders capture Rogue?
8
Can Crusher Creel absorb the Phoenix Force?
27
How does Rogue from the X-Men fly?