M5 and Beta 5 computers in Star Trek TOS; who designed the props and what inspired the circular computer screens?

Star Trek TOS has (at least) two computers with round screens, the M5 and the Beta 5 described below. This is an out-of-universe question on the design of the props.

Both remind me of the early PDP computers shown in this question but I don't know if it is just a coincidence (round CRTs were more common then perhaps?) or if inspiration was really drawn from real computers of the time. Is there any information on this, or perhaps on the people who designed the computers for the sets of these episodes?

I'm also interested if there is any information on the artistic design of the moving/drifting wavy lines, projected onto the round screen of M5 and in the upper rectangular screen of the Beta 5, and the rectangular displays with fixed, thin rectilinear color lines. I could ask that separately if someone expresses an interest in answering separately.

In the TOS episode The Ultimate Computer the famous scientist Dr. Richard Daystrom (namesake of the Daystron Institude) has a mental breakdown after the M5, closely modeled after Daystrom's own mind, had committed what Daystrom felt to be murder by intentionally destroying a Starfleet ship as part of an exercise gone wrong. At the end, Daystrom needed to be taken to "a total rehabilitation facility".

Screen shot from Star Trek: Daystrom Speaks to The Unit: 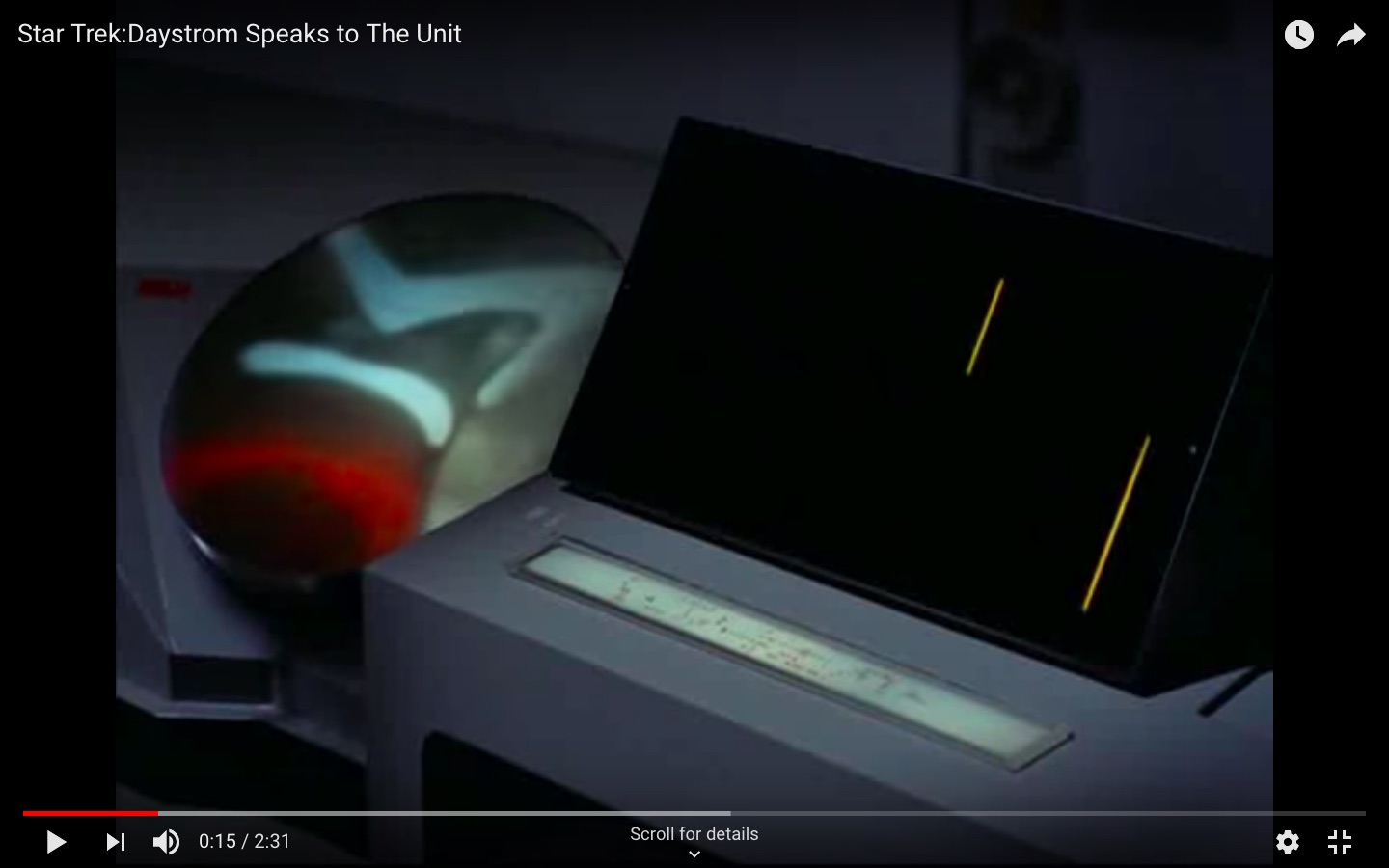 ...was a sophisticated computer built by unknown aliens from a hidden planet located more than 1,000 light years from Earth. It was installed in 1968 at 811 East 68th Street, Apartment 12-B in New York City, which was occupied by pseudo-secret agent Gary Seven. 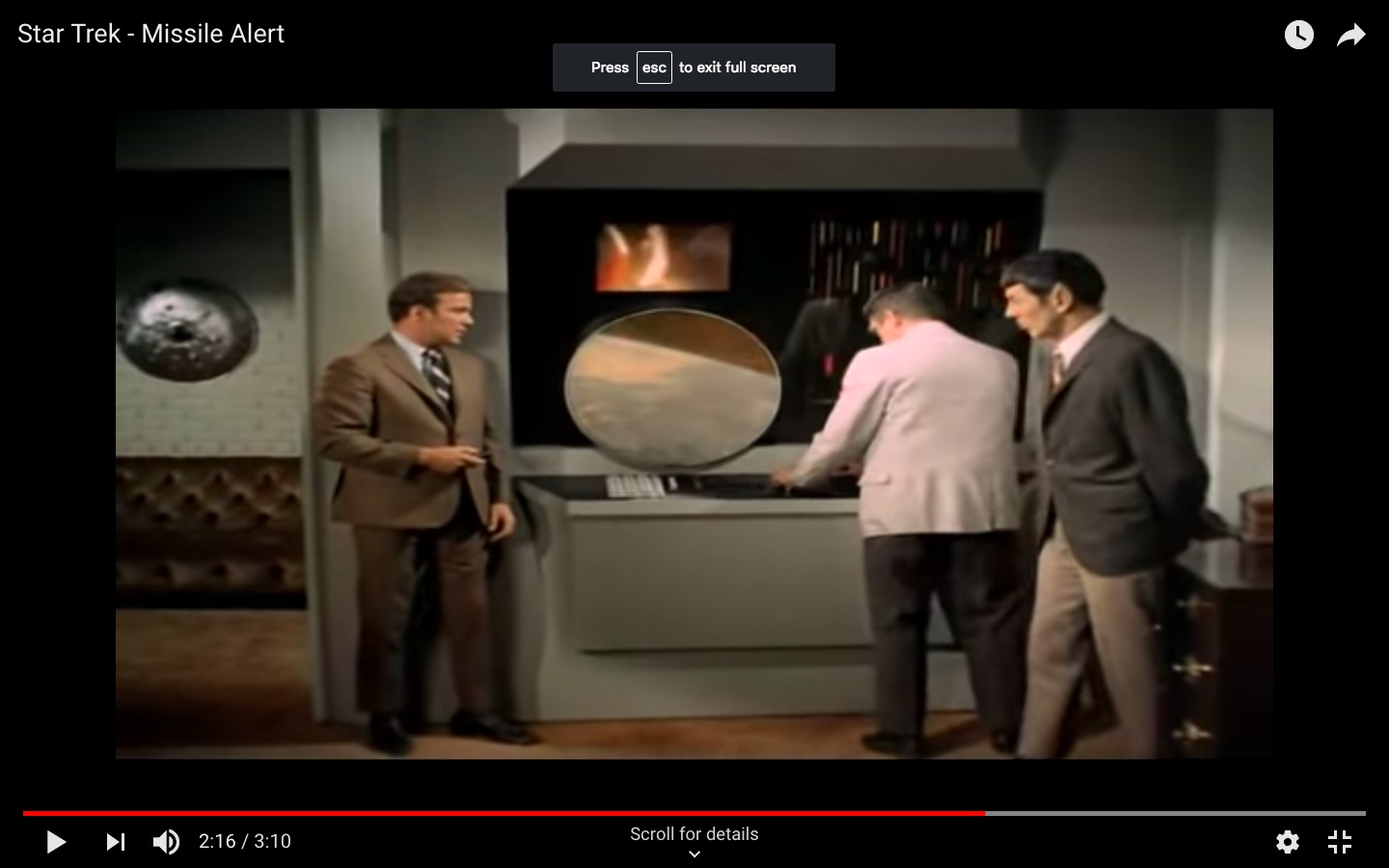 You have asked two questions.

Who designed the props?
NKCampbell generously provided information in his comment below:

the prop master for "Assignment: Earth" was named Irving Feinberg fwiw. He would have been involved to some degree with it - either picking stuff out from a prop house or computer equipment dealer or working w/ the production design staff

What inspired the circular computer screens?
This I can answer with some small degree of first hand knowledge. For this, you need to know a little about computer and electronics history.

Very old equipment, such as an oscilloscope (link to Google image search) had an even coat of phosphorus on the display, and you could actually see the beam tracing back and forth (which was the point). Adjust the frequency low enough and watch for hours of fun. (Don’t be distracted by the square ‘lines’ — they were painted on the glass.)

The design was rather primitive, and a round screen was very much easier both to manufacture and to program for the bounds of the beam. Google finds pics of vintage TVs easily. The edges are rounded, not because of the signal encoding (the TV signal has always been for a rectangular image, IIRC), but because the image at the corners was either missing (cropped due to the bounds on the beam) or not very well defined (and hence fuzzy, and fuzzy is bad marketing).

More modern CRTs, like the stuff you grew up with in the 70s and 80s actually swept the beam much further than the (square) display, and had hardware to control turning the beam off past the edges, and a significantly more complex hardware for controlling the beam to strike the RGB phosphors in color TVs. (Get yourself an old EGA/VGA hardware manual if you want some interesting technical reading — you can control the bounds directly with software! :-)

Now, the idea of round displays was not new even with Star Trek. You can see round display screens in older sci-fi like Flash Gordon. Here’s a pic I found of an old FG comic featuring a round view screen. Looks a lot like an oscilloscope, doesn’t it? 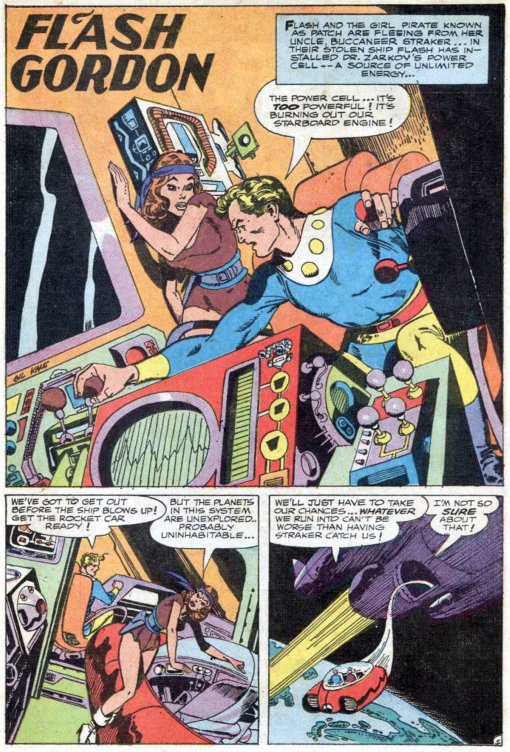 Round displays even featured in TV episodes along with the bleach-bottle ray guns.

During the late 40s and through the 50s, when people thought of hi-tech stuff, they thought of these cool devices that showed a picture. They thought of early televisions, which in the 60s still were new, high-tech stuff operated by nerdy science-y people.

Even today round is sleek and high-tech. I bet you can easily find many sci-fi movies featuring pretty, round/curved, holographic/see-through/awesome futuristic displays, with no square corners, all on your own. 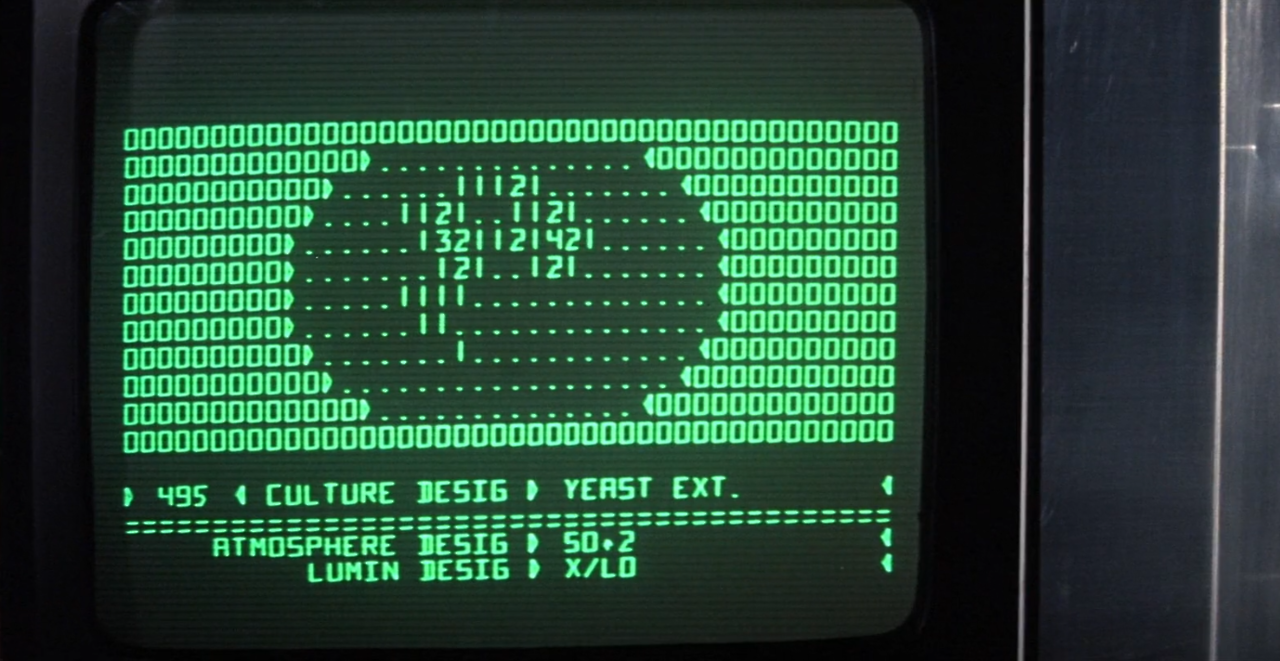 Star Trek (TOS) was shot on an exceedingly tight budget given what they were doing. Masking part of an image to place another above it was a time-consuming technique. Doing things like lining up a spaceship against a planet was an expensive task. Why spend time and money to display something that we would consider ‘real’ that had no effect on the plot? It was much easier to simply put up a pretty color wash that got perfectly cropped by the masking.

Even if Spock had to look into the display and ‘read’ something, it wasn't too far-fetched. A lot of old optical equipment could only properly display things to people directly in front of it. Those in the audience’s position would not see anything more than colored light. I suppose that on Star Trek the displays were just more advanced so you got a lot of colors. That or it was a screensaver, LOL.

tl;dr
So, to finish, the main points are: 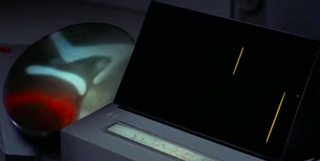 I just ran across these images in Theclever.com's 15 Huge Supercomputers That Were Less Powerful Than Your Smartphone 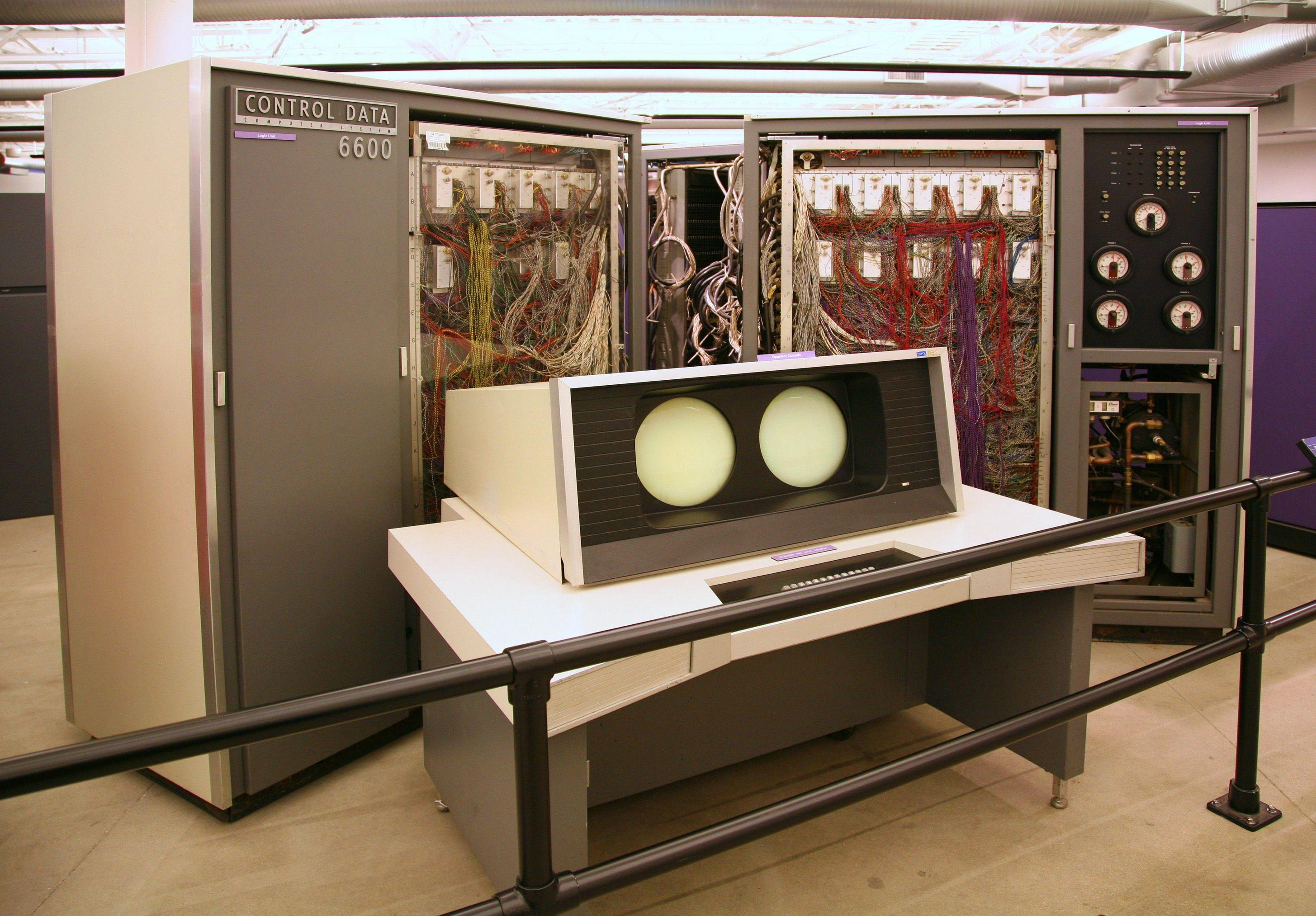 In the 1960s and 1970s, one person, Seymour Cray, pretty much ruled the supercomputing world. Think of him as the Elon Musk of the “Mad Men” era, sans electric car. While working for CDC, he designed the first true supercomputer, the CDC 6600. Released in 1964, the 6600 was three times as fast as its closest competitor, boasting a processing speed of three megaflops, or 300,000 floating point operations per second—making it the fastest supercomputer in the world at the time. By comparison, the iPhone 5S, now almost a junker of a smartphone, can handle 76.8 gigaflops (that’s 768 trillion flops). Cray would go on to form his own company, Cray Research, which set the pace for supercomputers for the next two decades. 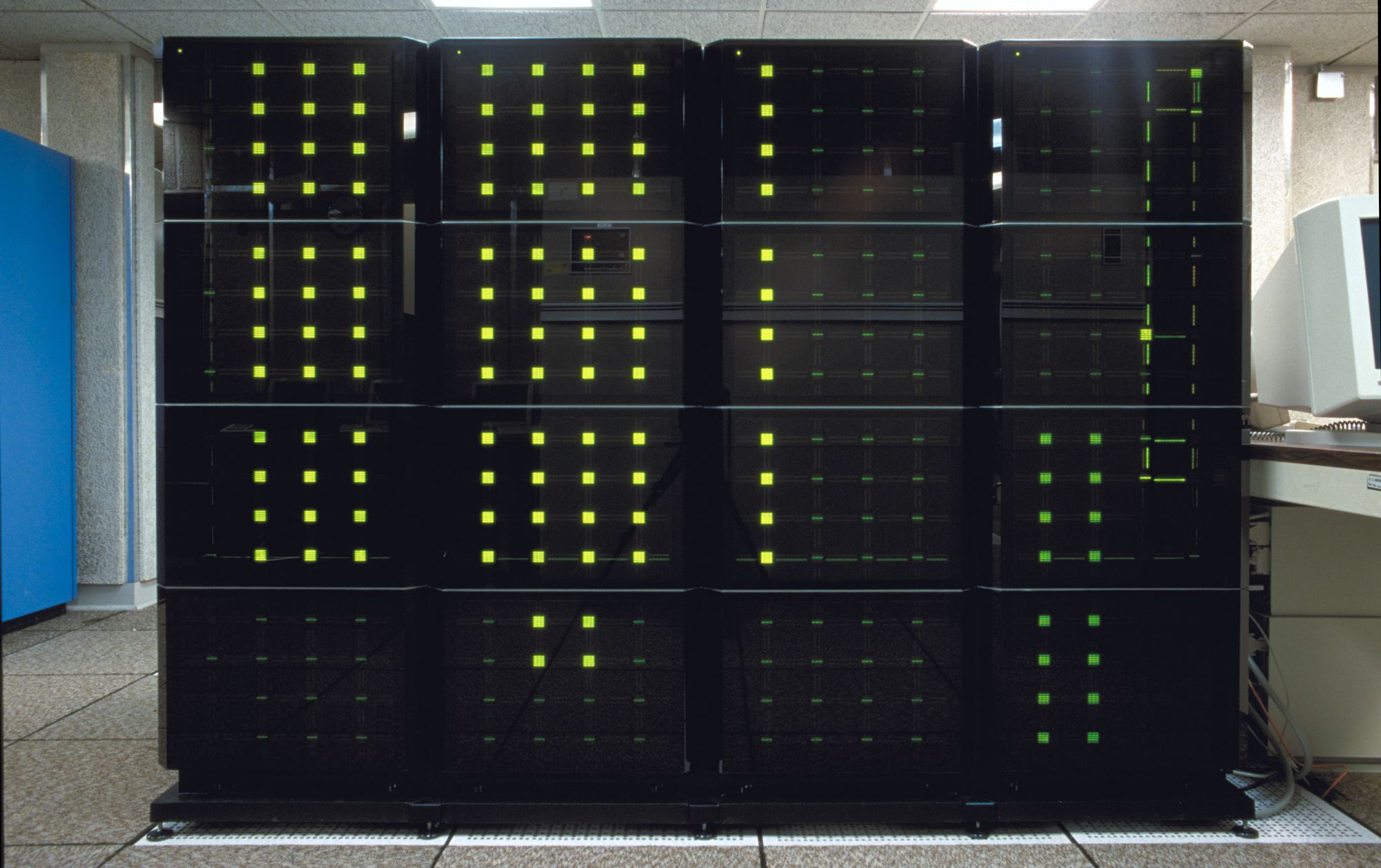 The Samsung Galaxy S5, released over two years ago, is on par with 1994’s hottest supercomputer, Intel’s Paragon XP/S 140. The supercomputer had a benchmark speed of 143.4 gigaflops, while the Galaxy S5 comes in just under that speed metric at about 142 gigaflops. The Paragon was a massively parallel supercomputer, meaning it used a whole lot of processors, or separate computers, to perform a set of computations simultaneously. Supercomputers after the Paragon XP/S 140 began to really prove out Moore’s Law, and finally, in the mid-1990s, they began bringing the speed. The Hitachi SR2201 quickly succeeded the Intel Paragon and the Numerical Wind Tunnel in 1996 with a processing speed of 220.4 gigaflops, and by the early 2000s most supercomputers were easily jumping over the teraflop barrier.

Not the answer you're looking for? Browse other questions tagged star-trek star-trek-tos computers design or ask your own question.

34
Are there any other episodes of Star Trek that deal with mental health?

10
In Star Trek TOS, who is security chief, and how does the department function?
14
How was the teleporter effect on Star Trek: TOS achieved?
10
What Star Trek episodes take place in the Beta Quadrant?
48
Female uniforms and colored panties in Star Trek TOS
7
Who were 'The Old Ones' mentioned in Star Trek TOS
8
What was the name of a Star Trek TOS "Choose Your Own Adventure" style book?
5
What is the name of this Sci-Fi Circular Interface Seen on Computers and Holograms?