Do any aircraft use slugthrowers?

As described in this previous question, the Slugthrowers of Star Wars are almost on par with real world guns. Have slugthrowers been used on aircraft in Star Wars as weapons? For example, has an T-47 (or any airspeeder*) been fitted with a high rate of fire slugthrower?

*I assume that some physics still apply in the Star Wars universe to projectiles in the vacuum of space, therefore the slugs would merely float around when fired outside of a planet's atmosphere, correct me if I am wrong.

In canon, there appears to be at least one example. However, I am not sure if it exactly fits the criteria of your question. The canon comic miniseries Obi-Wan and Anakin takes place on the planet Carnelion IV in the midst of a conflict known as the Open-Closed War. Two humanoid factions, known as the Open and the Closed, fought for numerous years, each blaming each other for starting the war. They had so ravaged the planet that they were forced to used comparatively simplistic technology. Instead of blasters, both sides were armed only with slugthrowers, and they attached slugthrowers to the various vehicles that they used. One of the weapons of war used in the Open-Closed War was the airgun. It resembles a heavily armed blimp. Technically, it is an aircraft armed with slugthrowers. Here is a picture for context (the airguns are at the top): 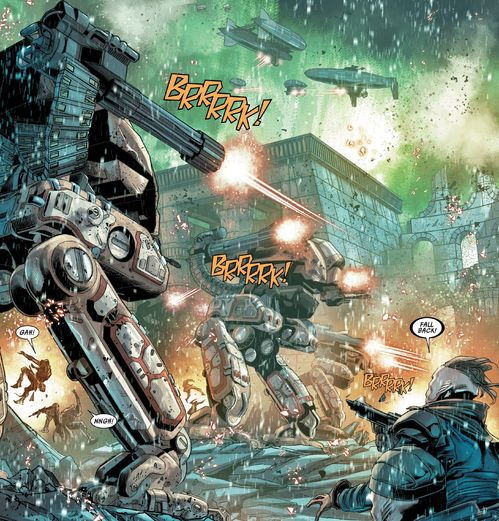 Many ships used projectile weaponry of one sort or another, including railguns, slugcannons and missile launchers. The most prominent example of an airship using that sort of weapon in the movies was the LAAT, a transport craft used extensively by clone troopers during the Clone Wars. They were outfitted with mass-driver cannons capable of firing homing missiles, high explosive, armor-piercing or anti-personnel rounds. In the Legends continuity the K-wing assault starfighter was specifically noted to have mounts capable of carrying shorter-range slugthrower cannons.

Projectile weapons are even more effective and devastating in space than in an atmosphere as they do not have to contend with gravity and air resistance.

22
What is the earliest instance of the use of term "blaster" in sci-fi to denote energy-based weapon?
2
Is there any use of Claytronics in Star Wars lore?
19
Are there any other weapons designed using lightsaber technology?
53
Why don't survivors in the Walking Dead use spears?
6
Could the Olympians use modern celestial weapons?
47
Do Stormtroopers ever use the sights of their E-11 blaster rifles?
16
Why do snipers use blaster fire instead of bullets?
9
Are there any hyper-drive based Star Wars weapons?
5
Can slugthrowers penetrate stormtrooper armour?
25
Why don't they use dragonglass sword?