Being a bit vague here it was a series I saw in the 1990-2005 on the sci-fi channel in Europe. The main plot is that there a two geneticists and they find some people have x% difference in their makeup making them not Homo sapiens.

I have some thoughts that it was called 47% or similar but cannot find it. I remember there was a young woman with red hair and a guy they were working for a lab but when they found this difference they ended up working on it "off the books" while the "evolved humans" were trying to find them.

It was shown on TV in Sweden about the same time as the First Wave series. It was a North American series (I would be inclined to think from Canada) Sorry though that's about all the things I can remember which is why it's so hard to find. Even tried looking at the lists of series from the Sci-Fi channel.

While it doesn't match the proposed series title, could it be Prey (warning, TVTropes page)?

A short-lived science-fiction TV series that premiered on ABC in 1998. The show lasted only for a single season (13 episodes).

Dr. Sloan Parker (Debra Messing) is an anthropologist studying genetic variation in humans. After her mentor is killed by the serial killer she was studying, Sloan discovers that the killer's DNA is substantially different (1.6%) from human to be considered a new Human Subspecies. In fact, after analyzing several cases involving serial killers, she determines that many of the killers have the same genetic markers. This new species is characterized by high intelligence, sociopathic attitude towards normal humans, and extreme aggression. Several people are made aware of this, and Sloan even theorizes that this new evolutionary development may be due to Global Warming.

Dr. Parker's hair is more red highlights than red, but she does work for a lab, and works with Tom Daniels, a federal agent, to track down the new human species. 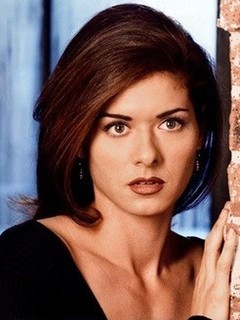 6
TV comedy about spaceship, done in the style of "Metropia"
5
What 80s BBC kids’ TV show had children fitting together machinery they found in the countryside?
7
Finding a book with a man from the future being reincarnated on Earth in past times
5
Sci-fi serial movie: Hyper-evolved human "queen" captured by scientists
3
Evolved children capture a strangelet