In "The Cursed Child", why do they revert their actions in the wrong order?

In Harry Potter and the Cursed Child, Scorpius and Albus go back in time to change the events during the Triwizard Tournament.

Why would they do that?

Why create a fourth timeline, which may be very different to any of the others? For all they know, it might be impossible to return to the second task from timeline (4). Going back to (2), besides being the natural thing to do, should be much safer. What's the rationale here?

They go to task 1 since it was their earliest influence of the timeline.

If task 1 hadn't changed then alternate task 2 (timeline 2 and 3) would never have happened, ergo fix task 1 and they go poof.
If they had gone to task 2 then they would still need to go back to task 1 later and fix it, thereby removing alternate task 2 from ever happening anyway.
My guess is that they messed up when they were supposed to revert the original timeline and instead created timeline 4.

I should add that I haven't actually read The Cursed Child, so I'm taking my intell from your question.
And of course there are a lot of different theories how time travel work, if they create parallel universes etc. so every author has the liberty to make their own version. 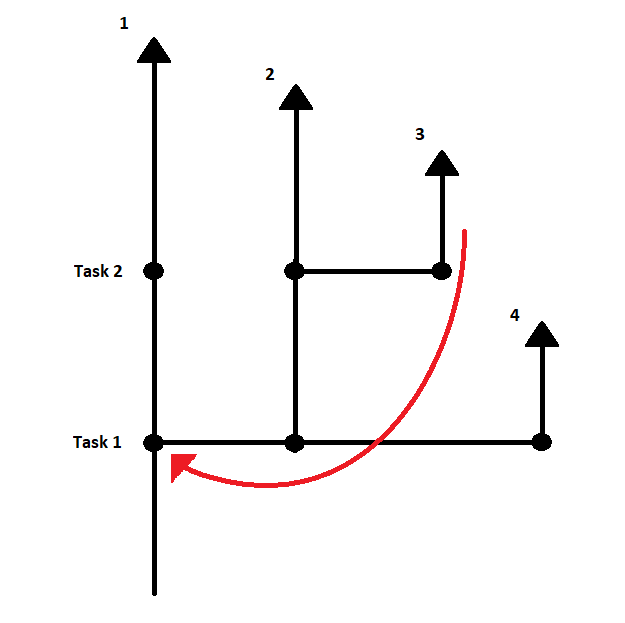 Thanks to the writer from above (Pingu510) I could give a better explanation about the time circle using the picture with arrows.

My guess could be wrong and Rowling could have an another way to explain about what happened but my best guess is that after Ron, Hermione, Snape and Scorpius went back to the first task (1), they have successfully changed the timeline on its proper way again.

However, you may ask why did they come back to the time where Voldemort is still raging. You should understand that the time they have returned to isn't a new time (4), but returned to the time (3). This is the point where things get complicated.

In The Cursed Child, it could be seen as you have changed the past, however it is likely that you have moved to 'another world where things are different' like Scorpius said. You just move to a different dimension where things are different. Therefore, the Time-Turner only moved Scorpius to World 1 to 2 and to 3. And with the help of Ron, Hermione, Snape from World 3, he returned to the boundary between world 1 and 2 and blocked the spell.

Therefore, this caused Scorpius to return to the present world 1 but leaving the others still in world 3 where they belong from the start. And as the Time-Turner works again, he returns to world 1 where his father and everybody is waiting for the time-adventurers.

Another guess is that they could have returned again to the boundary world 2 and 3, and seeing from the type writing used in The Cursed Child as a play write, but guessing from the evidence only given from the book that's my answer of why they returned to the first task and not visiting the second task.

And also, Delphi could be understood in the same way by seeing her moving through worlds just like Albus and Scorpius but gets captured in the world where Harry's parents died.

14
Why was triwizard tournament continued even when Dumbledore knew that it was dangerous for Harry?
8
When is The Cursed Child set
16
How did Moody curse Harry's obstacles away without the crowd noticing?
18
Who is the "Cursed Child" in "Harry Potter and the Cursed Child"?
6
How come everyone easily takes or say the name of "Voldemort" without any fear in Scorpius's world?
5
How can Albus and Scorpius forget the past in alternate timelines and retain memories from original timeline?