Anime where guy is forced to fight on his first day of magic school. Portal opens and his wife(!) comes out and gives him a gauntlet

This guy gets into a magic school where on the first day he is forced to fight a girl in front of everyone but during the the fight a lady comes out a portal and claims she is his wife and he gains a gauntlet/claw which I think was gold.

(It is not High School DxD or Qualidea Code)

It's a wild guess, but do you mean Maken-ki!?

A boy is new at a school where kids learn to use magic and fight each other with magical artifacts. He gets in a fight and a girl with a golden claw saves him and claims to be his fiancee.

Pretty similar so far but I don't recall her giving him the claw and I'm not too sure there was a portal involved. 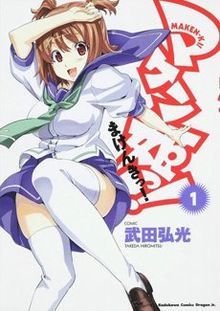 Takeru Ohyama has enrolled at Tenbi Academy, a private prep high school that converted from all-girls to co-ed. Hoping to have a life full of ogling pretty girls, he reunites with childhood friend Haruko Amaya, who shows him around school. However, he learns that the school is for students who possess magical and spiritual energies called Elements and who wield crafted weapons known as Makens. The students engage in school sanctioned combat matches that showcase their powers. While his own ability and Maken is not apparent at first, Takeru soon finds himself surrounded by girls, including Inaho Kushiya, an attractive girl who says she's his fiancée, and Kodama Himegami, a popular blonde who says she wants to kill him. He joins the Security Committee (魔導検警機構, madō kenkei kikō, lit. "anti-evil organization"), also known as Maken-ki, which supports the student council's operations.

Inaho Kushiya (櫛八 イナホ, Kushiya Inaho) is the self-proclaimed fiancée of Takeru Ōyama.[ch. 1] She feels strongly for Takeru, and although he does not remember her much, she has decided to wait until he fully does.[ch. 12] She holds Takeru's father in high regard. Upon revealing this, Takeru gets upset and ignores her, which causes her to cry. Takeru later apologizes to her after Kengo confronts him.[ch. 7] However, in the anime, she cries after Takeru tells her that he cannot remember a childhood promise. At first, Inaho was one of the three students that the Element detector, Keronbo, could not measure. However, she manifests her Maken when she saves Takeru and a cat from a falling boulder. She names the cat Monji and usually wears it on her head. Her Maken, Kamudo, is a gauntlet that greatly increases her strength and speed.[ch. 7] She is the star of the bonus four panel series of Maken-Ki comics where she is presented in super deformed mode. She is voiced by Iori Nomizu in the anime series, and English dubbed by Tia Ballard.

7
Anime about a boy and a corrupt village
7
Book series: guy becomes a vampire, creates portals to travel between different worlds to avenge the girl who turned him
3
Manga about a girl who lives her life as if she was in a manga
8
'90s or 2000s anime - high school friends trying to save their friend (girl) who is stuck in dangerous dimension
5
Unpopular boy is saved by a girl with powers during an xmas party
2
Anime where a guy tutors a girl in magic