What does the Spider-man symbol on 1980's comic covers mean?

I've noticed a Spider-man symbol on several of my Marvel comics from the 80's. Any ideas on what it could mean? 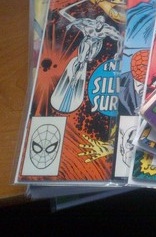 When comic book shops first appeared in the '80s, the comic book companies shipped two different versions of the comics to the newsstands (grocery stores, department stores, gas stations, book stores, etc.) and the specialty, comic-centric shops that had just started appearing. Newsstand copies would have a bar code and direct market copies (the ones in comic book stores) would have a picture of some sort. Spider-Man was the defacto image for a long time, until the early '90s when they started using that area to advertise things like character anniversaries or big events. The UPC area on this issue of Uncanny X-Men advertises the comic's 30th anniversary.

The issues were always identical in every way, except for the UPC area. Here's Avengers #300 for example: 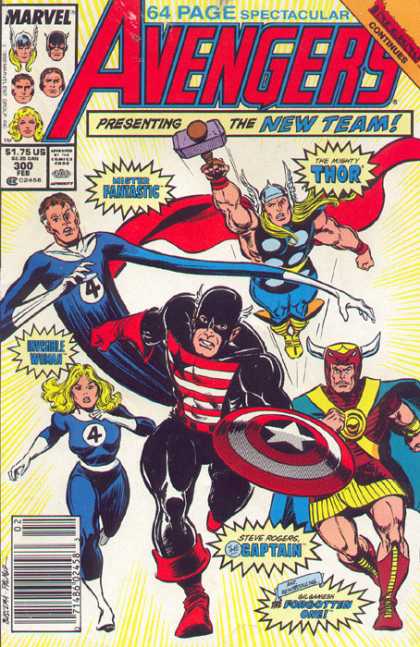 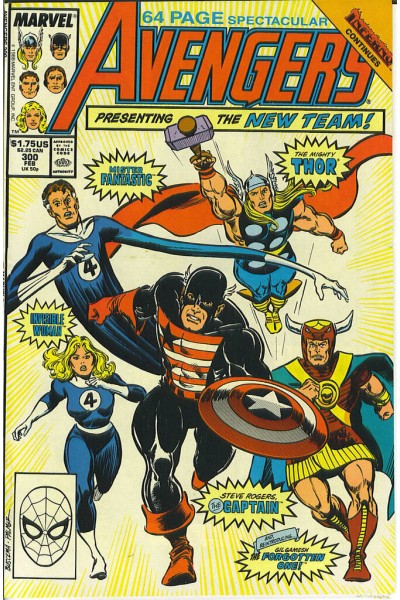 The image was also not dependent on the series itself, but rather loosely based on when the issue was published and what characters were celebrating anniversaries that year. As above, the generic Spider-Man head appeared on an issue of the Avengers. A Captain America head commemorating his 50th anniversary appeared on Uncanny X-Men #275 in April 1991. For an overview, this wiki page shows all the comics released in November, 1991. The UPC areas have images for anniversaries of the Fantastic Four and Captain America, regardless of what characters actually star in the comic book.

In the mid '90s, I assume as direct market retailers started having bar code scanning capabilities, the pictures went away and the words "Direct Edition" were placed over the UPC code like on the cover of this issue of X-Force from 1995: 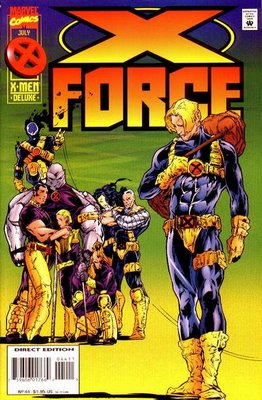 So if you have a comic that has an image in the place of a UPC, that means that comic was originally sold to the direct market.

Here's another great place to answer this question http://www.thecomicbookforum.com/forum/comic-book-discussion/comics-general/newsstand-editions-post-yours-here-705

To begin, different printings of monthly comics were first created by Ed Shukin, the Vice President of Marketing at Marvel Comics, in the summer of 1979. Ed was in the unenviable position of having to explain to 500 local magazines distributors scattered around America, all of whom had carved out exclusive regional territories during the distributor wars of the 1930's and 1940's, why Marvel selling directly to comics shops was not going to hurt them.

Comics were already seriously declining in sales at that point in history, so many of the local magazine guys did not really care that much about lost comics sales. But those who did care voiced a complaint that some devious comic shops owners were buying comics (nonreturnable) from Phi Seuling's Seagate Distributing Company at 50% off, and then returning those cheaper copies to their local distributor at a small profit. This was costing them money. To quell these complaints, Ed agreed to remove the bar code from all comics being sold to comics distributors, replacing them with logos, or small ads. Thus the concept of "Direct Market" editions was born.

The beginning of the system of marking comics differently according to distribution system made news in The Comic Reader 167 (April 1979, pp. 5–6). As a matter of historical interest, here is how the news was then reported:

"Those of you who purchase your Marvel comics from comic shops may have noticed that the UPC computer codes on books you got in March have been nullified by a black bar through them. This is evidently because certain dealers who have been purchasing under the pre-payment, non-returnable system from Phil Seuling and Jonni Levas's Seagate Distributors have been returning stripped covers to local distributors for credit they're not entitled to. Also, it appears that the Whitman style editions, with the diamond over the normal number/date box, omitting a cover date entirely, are going to be substituted for all the regular issues for all direct-mail dealers. Since certain of us are picky about which edition we get, there are worries among some of the dealers we've talked to that this measure, done to prevent unethical returns, will ultimately adversely affect their sales."

The earliest Direct Market editions have only a simple slash through the bar code. This began in June of 1979 and possibly lasted three or four issues, depending on the editor in charge, and the publishing frequency of the title. Soon thereafter, Marvel's highly efficient Editor-In-Chief, Jim Shooter, established a unified program of monthly barcode replacement logos, which lasted until he was deposed in a vicious palace coup, in the summer of 1987. After that, as near as anyone can tell, individual editors were allowed to create whatever they felt like in any given month. This decentralized decision-making about the bar code boxes resulted in some titles (such as Alpha Flight (1983)) having bar codes, even though they were really on sale only in the Direct Market. This makes documenting the different printings sometimes very confusing...

8
What does the small picture on the cover of comic books indicate?