Book about a castle full of portals to other dimensions, everyone there has some magic

I read this as a paperback in the 1990s in Ashland, KY. I think the cover had the eponymous castle with various characters seen in it. I think I later learned it was the second book in the series. The viewpoint character was a female from Earth, or a place very like it, who accidentally transports to the castle while taking a shower, leaving her naked and eyes stinging from the soap she can no longer rinse off. She eventually encounters other members of the castle who come from various worlds. One, I think, was a male, but I don't remember much about him. Another was a yeti-like furred creature that came from a very cold world. I remember a scene with him where he was inwardly joking about having to deal with a "piss-cicle" because he was using the bathroom outside and it was freezing fast. At some point, those three get marooned in a world where their magic doesn't work very well, and which is much warmer, causing the yeti guy's fur to start to fall out as he grew sick from too much heat. One of them had the power to summon items, with early summons involving some kind of green goo (maybe it was her shampoo that she was summoning?) and later using it to grab some very sickly-looking hamburgers that they used for food while stranded. Eventually, they got back to the castle.

Near the end of the book, the King of the castle comes back. I want to say that he was somewhere like Earth when an assassin with a gun went after him, with some description of how the stray bullet had lodged itself in a box of books, having pierced several. His magical ability is much more powerful summoning/creation. I remember him repeatedly summoning a helicopter around him as he approached his destination, it constantly getting shot down or dispelled or something. Later on, he's being chased by some sort of demons. I remember him summoning metal walls and, at one point, a mushroom-shaped plug of stone to close up a hole. Eventually, he meets the antagonist, who I want to say is a relative, maybe an uncle. During their dialogue, there was a point made about disrespect by not standing when the other entered the room, but I forget how exactly it worked. Eventually, the King beat the evil wizard and that was the end of the book.

I keep wanting to say that the title was something like Magic Castle [for Sale], but I think that's me confusing it with Terry Brooks's Magic Kingdom for Sale - Sold!.

I figured it out. It's the Castle Perilous series by John Dechancie.

The Castle Perilous series revolves around Castle Perilous (the name is drawn from the Siege Perilous of Arthurian fable), whose lord is Incarnadine, a sorcerer. 144,000 doors (or "aspects") of the Castle each lead to another parallel universe. Some of these dimensions are magical, while others have little or no magic; one of the latter is Earth. Those who find themselves at the Castle often stay to become residents, and (to their surprise) develop a magical power of their own. This gift is apparently random, and can range from a minor telekinesis limited to lifting pencils to super-enhanced senses to teleportation to full conjuration of matter. The main character, a philosophy major from Earth named Gene Ferraro, gains the power of superb swordplay. His best friends include Snowclaw, a giant humanoid covered in white fur, who originally comes from a polar-like clime, and Linda Barclay, a woman from Earth who becomes a powerful sorceress.

I read Castle for Rent. 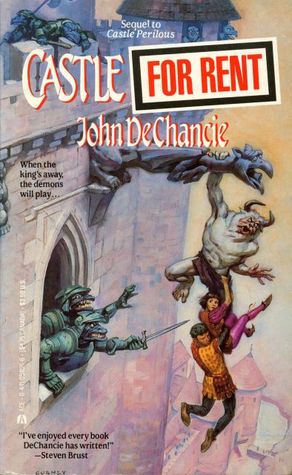 Once upon a time, the king of a mysterious castle found himself out of place. The odd thing was that the time was the future and the place was New York City! Castle Perilous had been a universe unto itself until it started living up to its name. Now it is a gateway to thousands of universes, each increasingly bizarre and more bewildering. Behind every door there is a room for every fantasy and around each corner a perilous journey for every inhabitant. With its population sent to otherworldly realms and demented demons taking their place, will anyone find their way home in time? The stone walls may be the only stable element in this fantastic fable, as time and place disappear before one's eyes. Pandora's box has never been so big!

I don't really have a good story for finding it either... all of a sudden, "Castle Perilous" popped into my mind as I finished submitting the question, and a quick Google search found it.

14
Book where boy doesn't have magic but everyone else does
3
Book series about a war between magic users and other people with a sport like football meets death
10
Fantasy book about a man with a magic box and something involving divine destiny
7
Fantasy novel involving deep language immersion and the phrase "wrapped in maps" to describe a particular nationality
8
Book series about a young man who apprentices with a magician in a castle
2
Book about magic rocks, fire and guardian magics
22
Book which has different races and could use magic