Fantasy book with a telepathic, poison-spitting snake named Me

I think I read this book sometime in the early to mid 00's, but I have no idea how old it was at the time.

From what I remember, the main character (male I think) finds himself in a fantasy world where he is able to telepathically communicate with some (maybe all?) animals. Most particularly, he befriends a small snake which refers to itself as Me and has the ability to spit highly corrosive poison or acid (I'm pretty sure it literally melts flesh.) The snake is highly enthusiastic and constantly asking "Want Me spit?" and the main character has to spend a lot of time explaining that no, not everything is a suitable target for face-melting poison spray, just a few specific things.

I believe the main character starts the book in our world, and is transported to the fantasy world in the middle of some kind of snowstorm. I think he also returns to our world at the end, with little or no time having passed.

Other random details that I think I remember:

I don't remember much of the plot otherwise, and any or all of these details might be completely wrong. Just throwing things at the wall in the hope that something might stick.

I did run across Pip & Flinx while searching, but it's not what I'm looking for. The telepathic snake I'm thinking about was definitely named Me. I don't think it could fly, either. 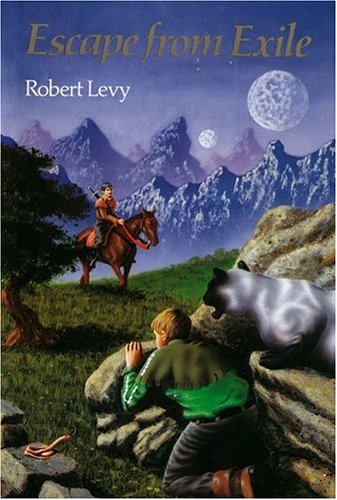 When Daniel awakens in an alien world caught up in a bitter civil war, he is forced to choose sides. Befriended by strange and powerful animals with whom he can mindspeak, Daniel and his small band of animal allies travel through this world having to depend on their own wits -- and luck -- to survive.

Taking a shortcut through the forest in a blizzard young Daniel is stuck by lightning—or something—to awaken on an alien world (shades of John Carter of Mars). He is soon embroiled in a civil war over the throne (yawn, yawn) but is naturally at a loss to know whose side to espouse. Of greater interest is his suddenly-acquired ability to communicate mentally (an Empath, as in Star Trek) with various alien animals on this planet. Through his compassion he gains an odd set of allies (as in The Beasts of Tarzan): a huge horse-like creature, a chameleon-poisonous snake and two huge mountain lion cats. This formidable team sets out to find vilified Princess Lauren. But Daniel’s secret goal is to find a local wizard who can help return home to Earth.

Privately nagged by his unkind, but natural) resentment of his genius little sister, Daniel develops sibling affection for a little princess on this world, Jeanine. Thrust into the role of big brother-protector, the boy finds growing fondness in the memories of a little girl he may never see again. What if there Are no wizards here? With plentiful action, generous dialogue and predictable syntax, this book is great reading for middle school kids.

It was provided as an answer here which I found by searching for fantasy book snake "named me".

6
Fantasy/Sci-Fi kids book: boy and telepathic owl/bird - in space/other planets setting
4
Fantasy series with black, white, red magic and magic mirrors
11
Fantasy book series with a male human protagonist and elves with magic tattoos
8
Help with a book, title something like Shattered or Fractured?
6
Young Adult Fantasy book where some people, like the female protagonist with super strength, are called a special name with their special powers
5
story-identification: fantasy story with physically weak protagonist that took place after nuclear winter
7
Old animated movie about anthropomorphic animals (lion prince in love with enemy girl while engaged to snake princess)