Definitely a feature length movie. Probably in theaters at some point, but might have been a 'made for TV movie'.

The theme/genre/style of the movie was a fantasy adventure, in the vein of the Schwarzenegger Conan movie, Beastmaster (1982), Red Sonja, etc. (since originally posting this question, I have ruled out those three themselves, see list of movies that have been ruled out, below). The overly-muscled and inadequately armored hero, overly dramatic fight choreography, absurdly fantastical enemies and settings, etc.

The scene I most clearly remember was of the damsel in distress. There were no prison bars or the like. Instead the scene seemed to be in a relatively large open room of a castle or fortress, a great hall or large feasting/dining room or something that size. The walls were definitely supposed to be stone and mortar, very large and rectangular cut stones, this was made clear by the closeups of the damsel in distress, as she was chained to the wall with hands above her head. The lighting of the scene was also somewhat unique, it was definitely firelight, not from candles but from a much larger flame source, such as a dozen or more torches or a large fireplace or fire-pit.

The scene did include both a close-up shot of the damsel in distress' face, as well as a full body shot showing her standing on the ground, and there were no explicit images in the scene. There may have been other scenes in the original cut of the film that were explicit, but none would have been included on the TV run I saw, as it would have been edited for content to the point that anything more risque than a bikini would not have been shown.

Movies that have been eliminated as possibilities:

Might you be thinking of the original Clash of the Titans? It came out in 1981 and did get some tv airtime in the 90s.

Our heroine Andromeda does indeed end up chained to a rock. A minor point that conflicts with your memory is that the rock is outdoors, but that could account for the unusual light source. It checks your other boxes as well- Harry Hamlin as our muscled and under dressed hero, lots of sword fights, big scary monsters (Harryhausen at his finest). 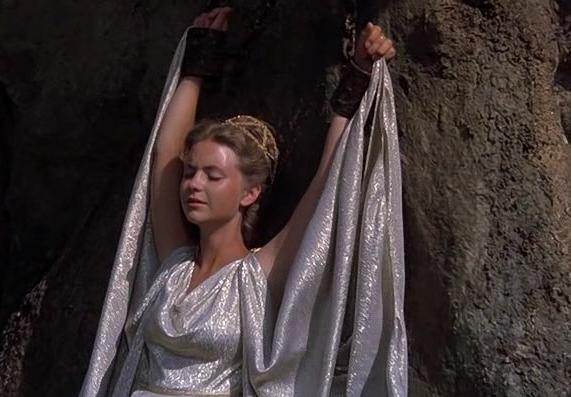 Set during the days of the Roman Empire. A simple village is raided by Roman troops, and most of the people are whisked off to be slaves or killed. Three women survive and set off to liberate their people. When they arrive at the Roman city, they team up with the local underground to seek vengeance and liberation of the slaves.

There's a scene with a woman being tied to a big stone of sorts, in a dungeon, seemingly candle-lighted. It was Valorum's answer to 80's barbarian movie with female lead, evil scientist, pool of acid - which I shamelessly stole!

The scene in question can be seen here at timecode 00:49:07. Warning, it's also very NSFW.

Found with the SFF query user:20774 url:.ru is:a [story-identification], as I knew I had seen such a thing here before, remembered OP stating it was a terrible scene (which reminded me of Valorum's wordings), and I vaguely remembered it having to do with Russian dubbing/hosting.

Any chance you're thinking of Kull the Conqueror (released 1997)? It's also a Robert E. Howard adaptation, so the association with Conan makes sense. Furthermore, it was supposed to be a Conan film originally, but Schwarzenegger backed out, and was replaced with Kevin Sorbo (of Hercules/Xena fame).

I can't find many stills, but I remember the love interest being a slave, so that might track with your memory of a woman being chained.

One of the many Beastmaster (Beastmaster II: Through the Portal of Time, Beastmaster III: The Eye of Braxus) maybe? They are high fantasy type movies like the ones you listed, with the "overly-muscled and inadequately armored hero, overly dramatic fight choreography, absurdly fantastical enemies and settings".

Two more suggestions, both involve a woman being held hostage:

And one more for good measure, I don't really remember the plot, but it's in the ballpark of the genres you describe, check out Masters of the Universe.

3
Futuristic "Govt + Army against rebels" movie with a female central character
6
80's barbarian movie with female lead, evil scientist, pool of acid
8
Movie - 80s to 90s Era, Possible Vampire and/or Sci-Fi
10
Movie with a girl summoning powers from a glowing pyramid
9
Fantasy movie where a young guy finds the love of his life through a magical doorway
15
Movie with a battle at a huge white castle with a long drawbridge?
7
Asian fantasy movie with a medieval setting, and a hero, a princess, and an evil general
17
What's this Arthurian movie with a ridiculous armored sex scene?