What does Gandalf whisper to the Moth while on Orthanc?

After the duel between Saruman and Gandalf in which Gandalf is bested, he is sent to stay on the pinnacle of Orthanc. Gandalf then whispers a message to a moth that happens to appear. 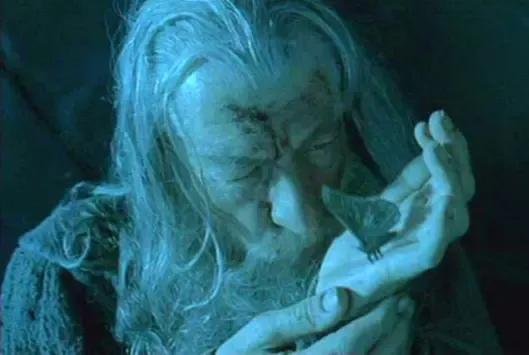 I know that the message involves the calling of an eagle, for that becomes obvious ten minutes later.

However, what exactly does Gandalf say to the Moth in the Elvish tongue?

The aforementioned moth does not appear in the books, so an answer from book-canon is non-existent.

I checked multiple scripts of Peter Jackson's The Fellowship of the Ring online, and I've gotten varied results.

Low angle...looking up at ORTHANC...the tower of Isengard, gleaming in the moonlight. The camera rises to reveal the once beautiful gardens are not a pitted wasteland...with smoke and fire billowing out of numerous tunnels and vent holes that litter the forecourt of ORTHANC. Strange guttural chants echo up from deep underground. The camera is rising...a small moth flutters into shot...and leads the camera towards the summit or Orthanc. Gandalf lies slumped against the wall at the very top of Orthanc, surrounded by a sheer 500 foot drop. He looks Weak and Frail...and is seemingly asleep. The MOTH flutters close to Gandalf. His hand suddenly moves at lighting speed and SNATCHES THE MOTH. Gandalf brings his hand close to his face and opens it. The moth sits on the palm of his hand as Gandalf mutter strange words in a foreign tongue. Close on: THE MOTH'S face... seemingly listening.

The Age of the Ring script (from which I based my answer on):

Isengard is now surrounding by deep ravines in the ground, which glow orange. Wooden structures stand around the ravines. Inside the ravines, wooden walkways and pulleys have been built, where hundred's of orc are working. A moth flies over the caverns to the top of Orthanc, where Gandalf sits dozing. As it flies past him, he quickly reaches out a hand and gently grabs it.

GANDALF: (whispering to the moth in an unknown language) Gwaihir go! Gwaihir

The moth flies off.

And from Tolkien's Gateway entry of Gwaihir:

Gandalf whispers "Gwaihir" repeatedly to a moth that arrives at Isengard. Later, Gwaihir rescues Gandalf from Isengard, and carries him to safety.

You can watch the scene and judge for yourself whether Gandalf says "Gwaihir" or is just talking gibberish. I, personally hear only a very muffled "Gwaihir", but the "go" is there.

50
How did Gandalf get his staff back after being captured by Saruman in Orthanc?
12
What is the significance of Gandalf's Moth?
16
How did Saruman's army reach Helm's Deep so quickly?
61
Why didn't Gandalf know what the Palantir was?
43
How does Gandalf end up on the roof of Orthanc in Isengard?
31
Why does Gandalf act in this way in the Houses of Healing?
54
Why didn't Saruman break Gandalf's staff on Orthanc as Gandalf broke Saruman's?
60
What did Aragorn mean when he warned Gandalf about entering Moria?