I need help identifying this anime where the lead character is a white haired guy and he's got crystal balls attached into his left arm which enables him to summon monsters. I remember one of his monsters is a green humanoid ladylike monster.

One of his friends is a girl with the crystal balls on her chest and her monster is a humanoid lady + jellyfish or something.

In a dystopian future, two friends dream of freedom... and gain more than they bargain for! Hothead Zed is on the run from the authorities, while his brainy pal Noah struggles with his own battered body. Both find a magical world that seems to offer escape and power undreamed of. Join Zed and his powerful, rebellious spirit Amir Gaul on their search for the ultimate power. It's a force that can save the world—or destroy life as we know it. This is the world of KIBA! Where you must harness the power within and fight with all you got!

Here's the lead character, Zed. White-haired, has three "shards" on his arm: 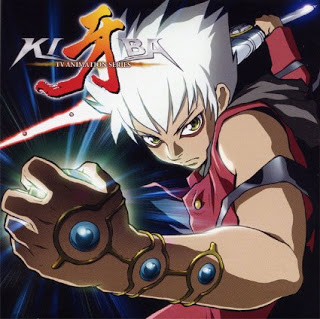 And here is Roya, who wears a crystal on her chest, and her spirit Afkareru, who does look a bit like a jellyfish: 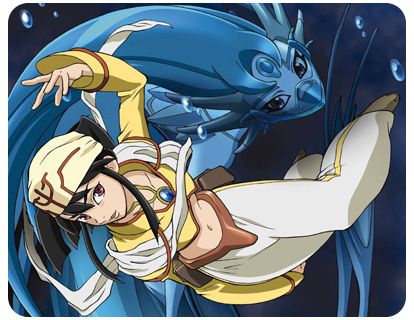 I found it by searching this site for [story-identification] anime arm is:q which returned, among others, Anime with character who has markings/balls on his arm that allow him to operate weapons

8
Does anyone remember this old "trapped in a video game" anime?
6
B&W horror sci-fi movie where a mad scientist sends a monster to kidnap the female lead, ends with a hairy shoulder
7
An anime about a boy related to gems/crystals
9
Anime where the first episode is about a 10 years old homeless boy
10
Anime about boy & summoning monsters
12
Anime Movie: Floating Islands, Post-Apocalypse Fantasy/Steampunk, Clans at War, Brother and Sister
2
Anime where everyone has a crystal inside their body to use magic
5
Anime where people summon monsters using gun-like devices that carve patterns in the air