Why did President Snow tell Katniss to “let it fly” when she was pointing her bow and arrow at him?

At the end of the Hunger Games movies when President Snow is facing execution with Katniss's arrow, Snow could be seen grinning malevolently and quietly encouraging Katniss to "let it fly." Why did he do that? Given that he'd die in the process, what could he possibly hope to gain by her doing that?

Did he believe that she'd somehow cause herself suffering or discredit herself in the process? If so, why did he care? Based on the linked question, Snow appears to have been ruthless, not sadistic, so what did he care if she suffered after he was dead?

It was the best of his options.

A well-placed shot through the head is a fairly quick death. Considerably better than being torn apart by a mob, or whatever else they may have had cooked up for him. Snow, either in spite of being a power-hungry dictator or because of it, understood the kind of people he was dealing with - and likely saw that this was best of all the options available to him.

Considering his crimes and the alternatives (and possibly an ugly death from an illness he clearly had), he may have seen such a death as a near-victory.

EDIT: He may also have had a personal interest in making sure that Katniss was the one who killed him. Coin at that point believed that she had successfully manipulated Katniss, but Snow seems to have guessed otherwise. As such, he likely suspected that Katniss will soon turn against the organization that caught and executed him.

This would greatly mar their victory over him (as well as the victory's use as propaganda), since the execution would have been carried out by someone who then turned traitor. If Katniss turned against the organization, then Snow's loss would go to her - not to them.

it's a macho thing, and not entirely uncommon.

Snow is figuratively spitting in her face, and demonstrating that although she can kill him, she cannot make him afraid.

It's rather like the occasional hero who, when being executed by a firing squad, refuses the blindfold.

When you have accepted the fact of your impending death, the details of how you die can become very important.

While I cannot find the attribution, I do recall reading about an individual in the Wild West who, when cornered by a vigilante committee, refused to run and was shot down. It was said that, if he had to go, he'd rather have the bullet holes in front, rather than in back. 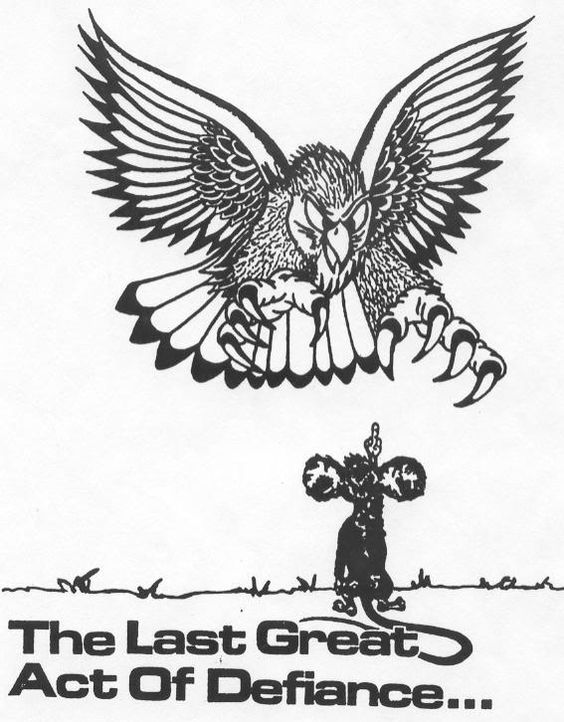 Not the answer you're looking for? Browse other questions tagged character-motivation the-hunger-games or ask your own question.

26
Why did Snape tell Voldemort when Harry Potter was really going to be moved?
42
Why did Katniss agree with President Coin?
17
Did the Gamemakers help Katniss when she was in the tree?
12
Why didn't Jane tell Ender that her origin was the Fantasy Game when they met?
15
Why did they shoot fireballs at Katniss, and was it cheating?
4
Why did Katniss not tell Peeta that she loves him?
4
Is President Snow sadistic or simply ruthless?
88
Why was Hermione always late when she used the Time Turner?