Book with female explorer on an alien planet, seduced by pitcher-plant and almost eaten

I am trying to remember a book with a female explorer who I think was the captain of an expedition to an alien planet. There, while exploring some alien ruins, she comes across a weird looking pitcher plant that, unbeknownst to her, emits strong sexual pheromones in order to attract prey.

Being seduced by the plant, she falls in its trap thinking she's having incredible sex. Luckily, another member of the team, who was immune for some reason (cold? allergies? mask?) rescues her just in time before she's consumed by the plant.

Despite the hentai-like scene, the rest of the story was quite serious, bordering on sombre actually. It was probably part of a longer series of books written in English from the early 2000s.

A team studying a doomed world becomes stranded on the surface, where they must live off of the land while planning for rescue. Priscilla "Hutch" Hutchins, the pilot, leaves her forcefield suit deactivated and becomes exposed to an airborne pheromone when she ventures into the forest alone for a bathroom break. The pheromone lures her to a large carnivorous plant. As she embraces the plant sexually, it secretes digestive chemicals that burn her skin. Hutch recovers her senses when her teammates rescue her and activate her forcefield suit to provide her with a clean air supply.

This scene occurs in chapter 17 of Deepsix (2001), the second novel in the Academy Series by Jack McDevitt. As of 2019, this series consists of eight novels and 8 short stories. 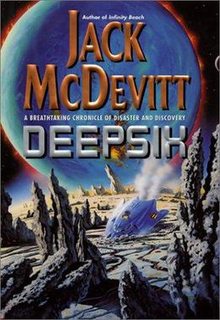