I am desperate to find a book I owned around 2005. It was a collection of short stories about dragons, and I'm sure that some of them had been published elsewhere and were by well-known authors. I believe, though I am not sure, that it included an excerpt from The Voyage of the Dawn Treader. There may also have been a piece by E. Nesbitt. There might have been an excerpt from The Hobbit but I'm not certain.

I do know that there was a story about a dragon that someone found in their basement, maybe? I believe the setting was small-town old-timey Europe, with some anachronistic elements. The protagonist captures the dragon and feeds it milk until it turns into a cat.

There may also have been a story about St. George.

I do know that the book was illustrated. I believe there were a few full-color pages interspersed with black & white or linework. The artwork often felt haphazard or rough to me- similar to Charles Vess's work, I think. It was a hardcover book, not especially thick, but almost square, about the same across (closed) as it was tall. The book was in English and I am located in the US. I feel like it had a super generic name, like "The Dragon Book," or something.

Great job including enough information to find the book! Using ISFDB, I believe I've found it: The Book of Dragons, edited by Michael Hague. It includes "The Adventures of Eustace" by C.S. Lewis and "The Dragon Tamers" by E. Nesbit. There was also an excerpt from The Hobbit. It also includes interior artwork by Michael Hague.

The cover art is: 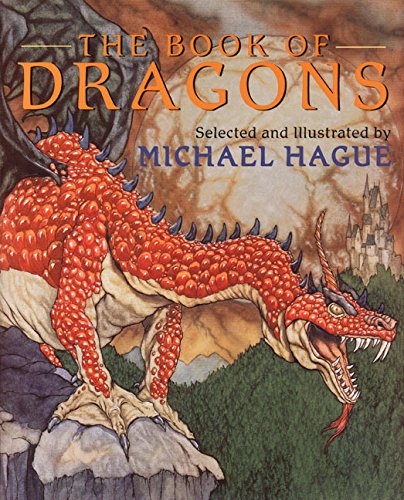 The full contents can be found on ISFDB here.

Not the answer you're looking for? Browse other questions tagged story-identification childrens-novel dragons or ask your own question.

9
Trying to identify a novel with dragons
4
Childrens Book of Illustrated Horror Stories from 1970s
12
Looking for a book with two main characters and dragons in the plot
5
Children's book about a dragon who could not breathe fire
11
Story about dragons in the real world
8
Children's fiction book about the multiverse
8
Book identification: children's book about family of vampires
8
Children's Fantasy Book involving village of dwarves fighting dragons and tug-of-war
6
Short story about a library that was a dragon hoard