Middle grade novel about two kids in an underwater city, one coming from the surface; they get involved with a gang

I read this novel in 2016 in school. The target audience was probably 8-12 years old. It was in hardcover and seemed new. The cover had a dark background with blue writing or drawings. I think the name contained the word “deep.”

It was American. The author is female, I think. I believe the publisher was Scholastic.

Somehow, the kids become involved with a gang or something. Near the end of the book there is a fight with harpoon guns and SCUBA gear. The villain is killed with one of the harpoons.

It is not the same as this question’s subject.

From Scholastic, which lists it at aimed for 10-13 years old:

Dark Life is set in an apocalyptic future where rising oceans have swallowed up entire regions, the Earth's shifting plates have fractured entire continents, and pollution has eaten away the ozone layer. On the dry land left, people live packed like sardines, stacked in towering skyscrapers where space is a rare and precious commodity. In this world, the only people with any land of their own are those who live on the ocean floor in sub-sea settlements. Much like the homesteaders of late 19th century America, these underwater pioneers ("Dark Life" as they're pejoratively called by "Topsiders") have carved out a life for themselves in the harsh deep sea environment, farming the seafloor in exchange for the land deed. Though they're often treated with suspicion by Topsiders who believe them to have supernatural Dark Gifts, the homesteaders are a fierce and proud bunch.

Sixteen-year-old Ty has lived his whole life on his family's underwater homestead, and has dreams of claiming his own stake when he turns eighteen. But when outlaws' attacks on government supply ships and settlements threaten to destroy the underwater territory, Ty finds himself in a fight to stop the outlaws and save the only home he has ever known. Joined by a girl from the Topside who has come sub-sea to look for her prospector brother, Ty ventures into the frontier's rough underworld and begins to discover some dark secrets to Dark Life. As Ty gets closer to the truth, he discovers that the outlaws may not be the blood-thirsty criminals the government has portrayed them as. And that the government abandoning the territory might be the best thing for everyone, especially for someone like Ty, someone with a Dark Gift.

The cover sorta looks like your amazing Paint sketch. "Deep" isn't in the title, but there is a cover variant with the tagline "Beware the Deep" (so you were right!): 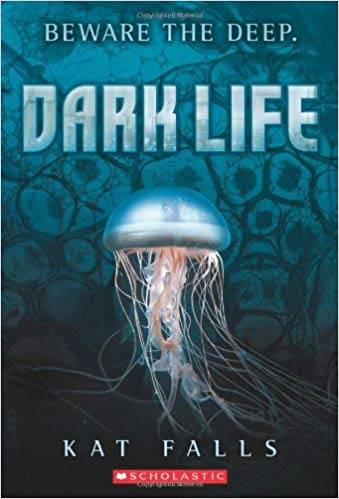 Found with the Google query "deep" underwater site:shop.scholastic.com. I went to Google images and sorted by color blue (here's what it looks like); while there wasn't "deep" in the title, the jellyfish cover looked pretty close.

Not the answer you're looking for? Browse other questions tagged story-identification novel childrens-novel or ask your own question.

6
90's teen horror novel where “Mike” goes on a date with a girl to see their favourite band “The Zombies”
4
Identify science fiction story about people surviving in an underwater biosphere after extreme climate change
4
Book about a teen underwater fish farmer?

11
Which kids movie, from the 80s involved aliens with guns that could be powered by pennies?
3
Short novel with two men and a woman on a spaceship; one of the men abuses the woman
7
Novel about underwater city with separatists
7
Post apocalyptic novel, one character a centaur with a mouth in the middle of its chest
5
Looking for a book about dog rescued from scientists, then kids get superpowers with red eyes
18
Old kids show from the 80's about two kids with a magical compass that took them to another world
6
Novel about two princesses in a fantasy world, one falls sick and the other travels to find a cure
6
Book where a boy moves to a town where only young kids are superheroes