Story about a man-eating plant in another dimension

I read a story in the late 70s about a man who travels to another dimension and finds himself on an alien desert planet with giant carnivorous plants.

The plants have teeth-ringed mouths on the top of their trunk and long feelers to grab prey. I think they eat one guy and pull out his guts. Can anyone help me remember the story’s name?

Giant carnivorous plants are a common feature of science fiction, and authors commonly endow them with tentacles to grab prey. I haven't found an exact match for your story but you say it's an old story and you mention travel to another dimension, and this immediately makes me think of Clark Ashton Smith or others writing in the same style. He was inordinately fond of adventures in other dimensions - frequently eldritch dimensions.

There is a tree similar to your description in his novella Marooned in Andromeda, though as the title would suggest this doesn't take place in another dimension but rather on a planet in the Andromeda galaxy. I read it in the anthology Other Dimensions vol 1 when I was about ten and loved it - I still own that very book: 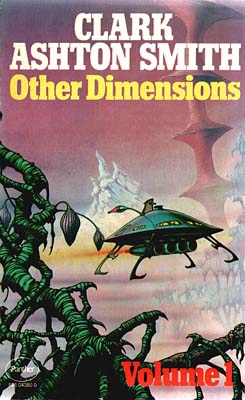 Anyhow, the scene with the tree is:

Adams ventured to take a step forward. Instantly a long tentacle shot out from the nearest of the kraken-like forms and encircled him. Struggling and screaming, he was drawn toward the great dark lumpish mass from which the tentacles emanated. There was an open cup-like mouth of vermilion, fully a yard wide, in the center of this mass; and before his companions could even move, Adams was thrust into the mouth, which forthwith closed upon him like the mouth of a tightened sack. Roverton and Deming were petrified with horror. Before they could even think of stirring from where they stood, two more of the tentacles shot out and gripped each of them about the waist. The grip was firm as an iron rope; and both were conscious of a sort of electric shock at the contact—a shock which served to stun them still further. Almost fainting, they were held erect by the horrible coils.

Nothing more happened for a brief interval. The incomprehensible strangeness of their position, the manifold fatigues and ordeals of the day, together with the shock of those coils, had dazed the two men so that they could hardly grasp the fate of their companion and their own imminent doom. Everything became unreal, misty, dream-like. Then, through the vagueness that enveloped their senses, they saw that the dark mass at the core of the tentacles was beginning to move and heave. Soon the heavings turned to convulsions that became more and more violent. Roverton and Deming fell to the ground as the coils loosened their hold, and saw the lashing of a score of tentacles in the air above, tossing from side to side about the agitated central mass. Then, from this mass, the body of Adams was ejected, to fall beside Roverton and Deming. Obviously human flesh had not agreed with the digestion of the Andromedan plant-monster. The mass continued to heave and palpitate, and its myriad arms waved through the air as if in agony

Even back in the 1970s Clark Ashton Smith's stories were mostly found in anthologies, and I wonder if you might have read the story in an anthology and conflated it with other stories of his about different dimensions. It's a long shot ,but I thought it worth a try.