So I read this book in 2004. It started with a female character who had six fingers and she wears gloves that hide that. Earth is xenophobic so she has to hide that she is part alien. She plays some kind of dangerous sport where people die all the time and where there is no gravity in a large arena.

Later she meets others that are part alien also and they steal a space ship to find the planet that their fathers had come from. Pretty sure that the race of aliens they were looking for was blue skin with six fingers and maybe the race name started with a J?

Another thing I remember is that woman and the other hybrids are the children of women that were stolen from their planets by pirates and made to be slaves. I also think that the blue race of aliens is a warrior race? With technology that is more advanced than human technology. That's about all I remember I read this like 15 years ago.

Pretty sure this is the Stardoc series. Specifically, the spin-off novel Blade Dancer. The TV Tropes page for the series highlights a lot of the things you mention as well. 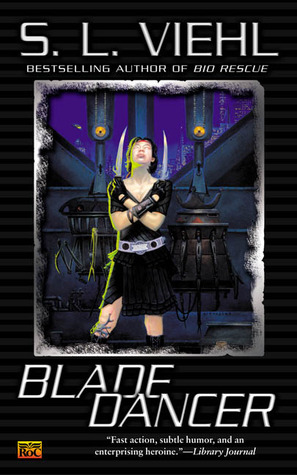 Jory Rask is a professional shockball player. The fastest runback in the game, she is loved across Terra. But Jory Rask has a secret that she's lived with for twenty-four years. In a xenophobic world that despises aliens, she is not quite human...

When her mother dies—and that secret is revealed—Jory must honor her last wishes and set out on a journey to find others like herself. And once they meet, none of their lives will ever be the same again. For in order to take the vengeance denied their mothers, they must undergo training at the Tana, the school for assassins known as Blade Dancers—the most lethal killers in the galaxy. And in the heart of that school lies a deadly secret...

In the first Stardoc book, Cherijo meets and marries a tall, blue, six-fingered alien of the Jorenian race. The race adopts her after his death and becomes a major player in the whole series. In this spin-off, Jory is a half-Jorenian and leads several others to their "homeworld".

Blade Dancer is set in the Stardoc universe but is not part of that series. The story is about a half alien (Jorenian), half human ("Terran") woman named Jory who is a champion shockball player. When her mother dies suddenly, Jory's secret - that shes not fully human, is discovered and she's kicked off the planet. The only reason Jory was sticking around anyway is for her mother, so now she's free to go back to her mother's homeplanet and carry out her mom's last wish - by seeking out the small group of half-breed Jorenians like herself to tell them something important about themselves. After that, she is planning to find and kill her father. Seeking revenge requires skill so Jory decides to train in blade dancing at a school for assassins in Tana.

6
What is the name of this book with a female character and aliens with six fingers?
8
Kids book about aliens taking a human as a pet
9
Earth occupation/invasion book I read in the 90s
13
Aliens like giant grasshoppers invade earth, give black people power over whites
7
80s (or earlier) sci fi book, humanoids bossed around by aliens
14
Novel series about competing factions trying to uplift humanity, one faction has six fingers