Does anyone know about an old movie (I think it's black & white) in which an alien that crashes to Earth loses its hand. The thought has occurred to me that this may not be a movie, but a TV show episode.

The hand then crawls away from the crash site to become a stow-away in a woman's car. The alien's hand is cut just above the wrist and veins or tendons trail from it as it crawls. It has thin fingers. The setting is the daytime when it gets into the woman's car. When she gets home, the hand crawls into the house and hides in the closet where it crawls up to the top shelf and then jumps on the woman when she opens the door and strangles her. I think it goes on to hurt more people.

It is not the movie title, The Hand.

Is it possible you're thinking of The Crawling Hand?

Astronauts keep going crazy and blowing up on their way back to the ground, and scientists can't figure out why. The latest astronaut to fall to this mysterious syndrome manages to contact his scientist superiors just before doing himself in; he alternates between pleas to "push the red" Self-Destruct Mechanism and violent urges to "Kill! Kill!" Finally the "red" is pushed, the astronaut is blown to shards and the scientists are still stumped.

Meanwhile, over in California, young med student Paul frolicks on the beach with his girlfriend when they happen upon the severed arm of the dead astronaut. Against his girl's wishes, Paul returns to the beach and takes the arm home with him (for what reason, we're not told). Soon, it becomes apparent to everyone (in the audience, at least) that whatever malediction had possessed the astronaut still possesses the arm, which promptly goes on a killing spree (said spree resulting in a grand total of ONE death). Paul himself is a prime suspect in the murder, but the two scientists arrive with their own theories. Then the mysterious murderous force begins to infect Paul as well, and he attacks a Malt Shop owner and his own girlfriend. After realizing what he's doing, Paul takes the hand out to a junkyard with the intent of destroying it, and between a fever of over 100 and some hungry cats, the evil is defeated... er, handily.

It's not an actual alien, but I think it otherwise matches.

A lot of the reviews on IMDb mention the aliens can detach their hands which attack people, for example:

In this one, a young couple accidentally run over an alien but its hand comes alive and terrorises people. The local farmer doesn't like the teenagers using his land for snogging in their cars. More aliens then appear and kill one of the teens with an overdose of alcohol as revenge for their mate being killed. A flying saucer then blows up with the military in attendance and the aliens are done away with at the end by light, their weakness. With a drunken bull.

Edward L. Cahn directed this cult classic about a pair of teenagers on a date who accidentally run over a newly arrived alien. Strangely, its hand falls off and comes to life on its own. Meanwhile, drunken friend Joe(played amusingly by Frank Gorshin) takes one home, but is injected by an alien with a fatal overdose of alcohol, and the authorities don't believe the teenagers' story of alien invaders.

I saw this movie in the early '60s, when I saw about 6 or 7. I have never been able to forget that severed hand, with the needles coming out of the fingertips, as it crawled up the car seat toward the unsuspecting teens. 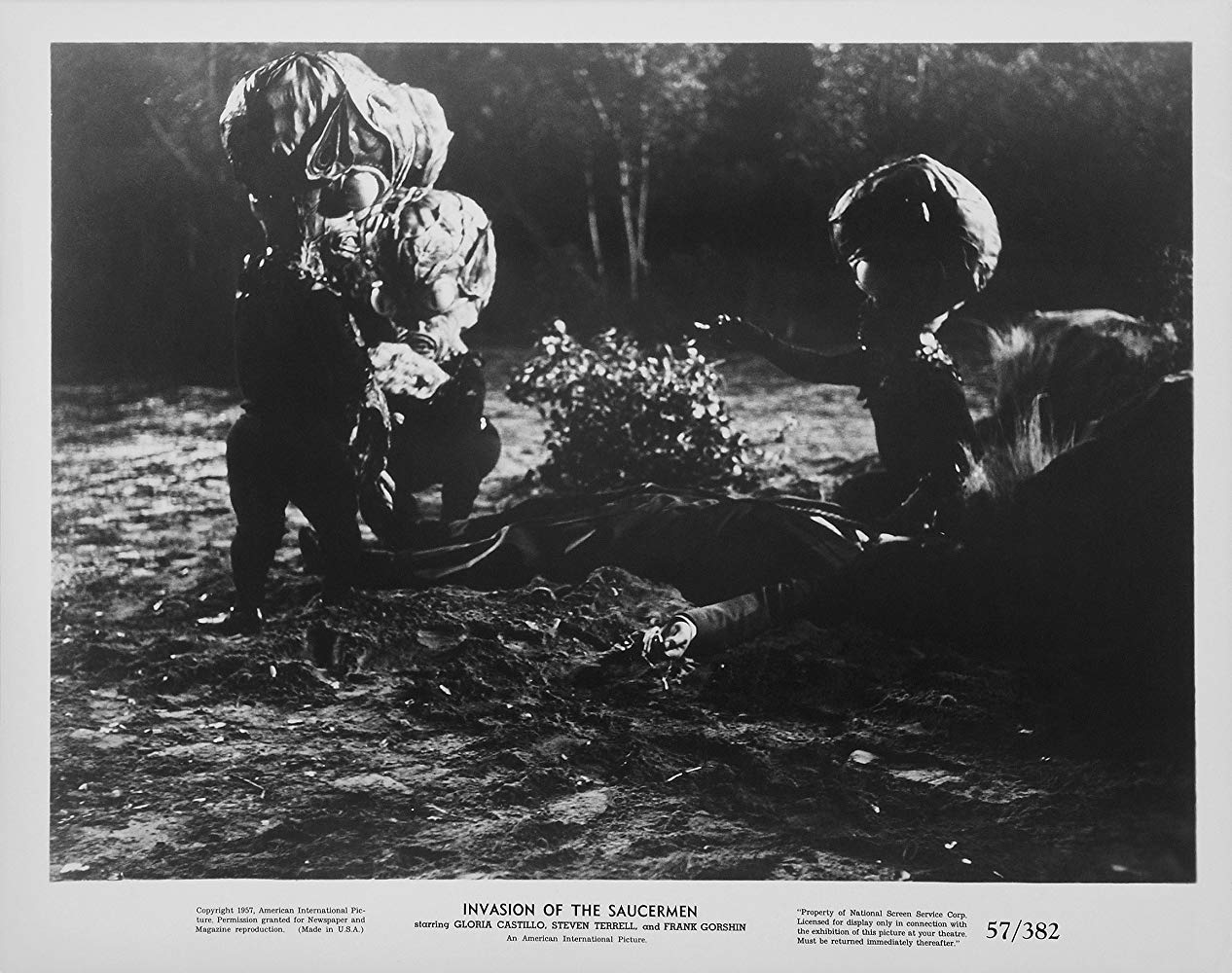 I too remembered a crawling hand with needles that came out of the fingers (which is about all I remember).