Anime movie about war from the 1980s [duplicate]

Ask Question
Asked 2 years, 11 months ago
Active 1 year, 8 months ago
Viewed 320 times
4
This question already has an answer here:
90s (or earlier) Japanese anime movie: two planets at war, young man is in love with princess from the other planet, and floods his own village (1 answer)
Closed 2 years ago.

Around 1990 I saw a cartoon movie on Super-channel (Europe). Think it was an anime. It was about a prince and a princess who were fond of each other but their countries were at war. The prince was from an industrial country and they had tanks and guns. The princess was from an agricultural country and they used bows and arrows and hot-air balloons. It had a sad and/or melancholic ending. Can't remember anything else. I would like to see that movie again. Does anybody knows the title?

I think this could be Windaria (known in the West as Once Upon a Time), which was released in 1986. The names of the characters and kingdoms differ between the Japanese and American versions, so I'll use the American names for convenience. 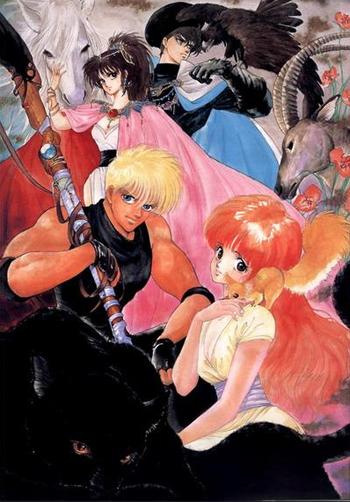 The prince is named Roland, and the princess is named Veronica. Roland is from Shadowland, whose military uses tanks and machine guns; Veronica is from Lunaria, whose military uses crossbows and hovercrafts (which I assume are the hot air balloons you remember). They're in love, but when Roland's father launches an invasion of Lunaria, they're forced to fight one another. The neighbouring agricultural region of Saki gets caught up in the crossfire.

It had a sad and/or melancholic ending.

TV Tropes lists the film as containing a "Downer Ending":

The original film ends with Lunaria flooded, Saki ravaged by war, and many people dead.

The ending was changed slightly for the American release, but as far as I can tell, things still end badly for most of the main cast.

5
90s (or earlier) Japanese anime movie: two planets at war, young man is in love with princess from the other planet, and floods his own village