An NTSB investigator looking at a plane crash. My memory of some of this is hazy. This movie had very odd elements, like him dreaming about being in a plane and seeing cracks developing in the body of the plane. Also, finding an extra arm. Turns out that he's on the plane that crashes.

I don't have any memory of time travel being involved. And, in this one, I think that, at the very end, the NTSB guy is sitting in the airplane, seeing the cracks form and realizing that the extra arm was his and that he's on the plane that's crashing. I've gone through IMDB looking for airplane crash movies and I'm starting to wonder if this was an episode on some tv series like The Outer Limits.

Your very last instinct was the right one. ;) This was an episode of a mystery show. It's a segment from the first episode of Night Visions from 2001 called 'The Passenger List' with Aidan Quinn as the investigator.

Aviation investigator Jeremy Bell investigates the crash of a plane he himself saw go down. He comes to believe that his daughter may have been on board and becomes desperate to find the truth. It's not too long before it becomes apparent that his daughter has been dead for quite some time before the crash. Could the cracks in the objects all around him be symbolic of cracks in his sanity... Or his reality?

He also finds a severed arm which doesn't seem to belong to any of the victims. Turns out that yup, he's on that plane and the cracks he keeps seeing are forming on the plane itself, which then proceeds to crash, killing him. The full episode is currently available on Youtube. Here's an image (from ShareTV): 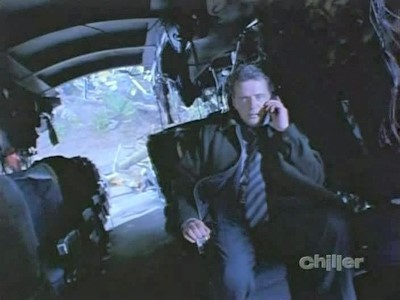 It might be the 1989 film Millennium (based on the John Varley short story “Air Raid”). The main character is an NTSB investigator who is looking into an air accident, and some strange things are happening.

10
Movie about a family replaced by clones
10
80s Sci-Fi movie with a monster-astronaut
9
20+ years old SF movie with a man inside a spaceship having his frozen arm ripped off by some kind of gravitational force
9
TV episode about a man seeing a creature in an airplane wing trying to sabotage it, but no one believes him
6
TV show I think, where Aliens are leaving Earth, most people on Earth don't know that they are on Earth
7
Supernatural child captured by cultists
9
Story that sounds a lot like the Iron Giant
9
The rich playboy is dead, and he's a ghost, but his wife still loves him
12
An animated sci-fi movie with a fully armoured antagonist and a pale looking child
6
Book where angel finds a planet full of humans and crash lands there losing its memory