Ask Question
Asked 1 year ago
Active 1 year ago
Viewed 76 times
-2
Closed. This question needs to be more focused. It is not currently accepting answers.

I can't trivially prove that Bugs Bunny has called Frankenstein's Monster "Frankie" (as alluded to in a comment by James McLeod; however, I can prove that another character with a similar sense of humor has: 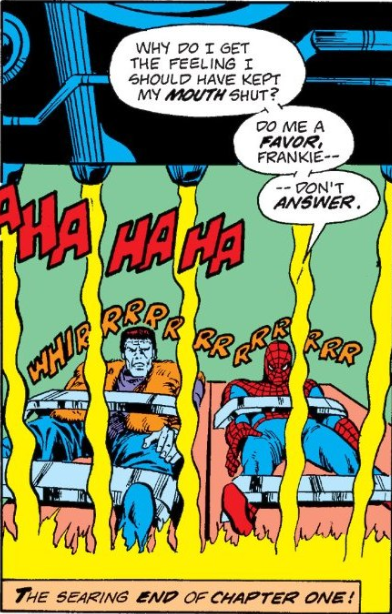 In the early to mid 1970s, Marvel Comics published The Monster Of Frankenstein. And, as they also published Marvel Team-Up, they had Spider-Man meeting all sorts of characters (some licensed, some public domain) also being published by them at the time. Spider-Man had met the likes of Dracula, Fu Manchu (and his son, Shang-Chi), Doc Savage - and, inevitably, the Monster.

Spider-Man met him and teamed up with him in Marvel Team-Up # 36-37 (cover-dated August and September 1975 respectively, with a Spider-Man-related werewolf character named Man-Wolf being the "official" team-up character for # 37).

The only surprising thing here is it taking until page 6 of the second comic for Spider-Man to actually call him "Frankie"!

Not the answer you're looking for? Browse other questions tagged frankensteins-monster or ask your own question.

14
How is the original Frankenstein movie (1931) different from the novel?
6
How did Dr Frankenstein get enough plus size parts to make his oversized creation?
3
Why does Frankenstein need multiple bodies to revive a body
17
What inspired Mary Shelly's “Frankenstein ”?
11
Looking for a specific Frankenstein short story
11
What is the significance of the white hair of the Bride of Frankenstein?
3
80s or early 90s sci-fi/horror possibly a spoof movie
7
Art book based on realistic “Frankenstein”?