Japanese anime movie, includes a sword and some gems, and a dragon-like friend

I watched this movie when I was a kid and never discovered it again.

It’s about a boy whose father left him after his divorce from the mother, the kid enters a world somehow where he has a big sword he needs to keep searching for precious stones to fill it with. it has certain holes that look like each stone shape! I also remember the kid going to eat with his mythical (dragon-like friend), and he gets stuck in the restaurant because the crazy restaurant lady won’t let him leave without finishing huge amounts of food!

The kid also gets bullied so I’m guessing the the swords journey is to teach the kid how to deal with all of this...

When 11-year-old Wataru's father leaves home and his mother is taken ill to the hospital, he decides to change his fate by traveling through the door shown to him by his friend Mitsuru. In a land of magic and monsters, Wataru must summon all his courage and embark on a journey with several comrades to meet the Goddess of Destiny and change this "mistaken fate."

There's a scene taking place in a restaurant, with a dragon-like creature, describing an "aunt Yuna" who won't let you leave if your plate isn't empty. 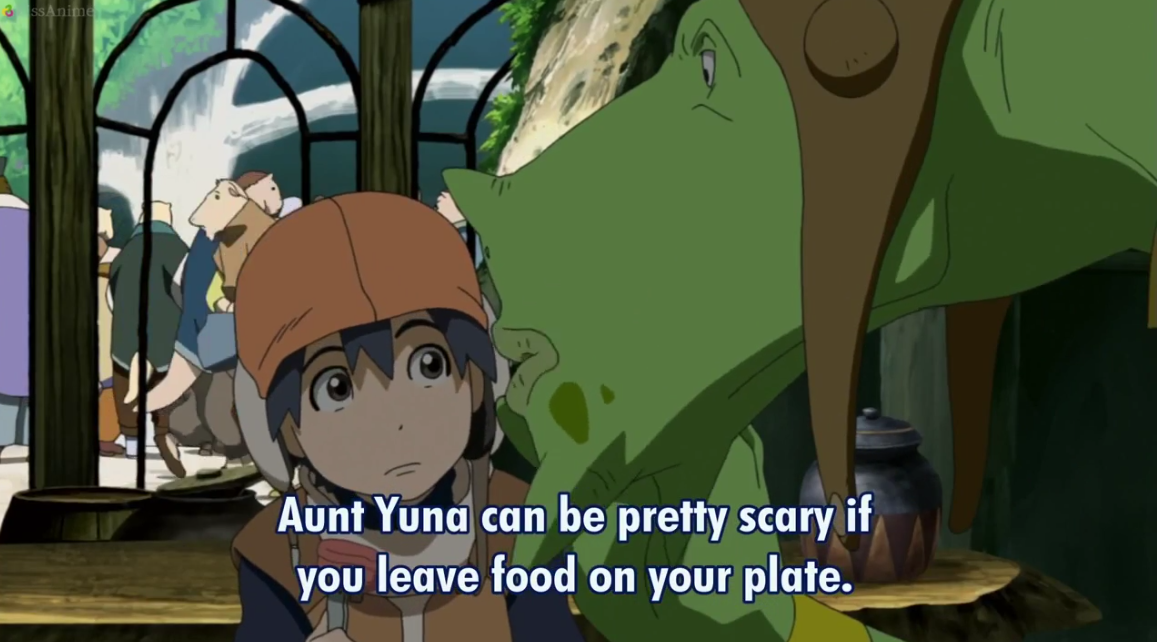 Found with the Google query anime movie sword gems slots site:myanimelist.net, which returned this solved story-id thread there, which was looking for this movie. Description given:

A boy gets transported to another reality where he meets a guardian or gate keeper (I think the guardian guy is a frog) and it turns out he fulfills some sort of prophesy and if he can find all of the gems and slot them on his sword the goddess of this world will grant him his wish but there's a twist, another boy from his school has already arrived in this world and he has a head start.

4
Anime movie with two brothers, one has a sword which gets more powerful (but also more evil) when stones are added to it
5
Story ID - Lengthy YA Fantasy Novel where a teenager quests through a fictional country to cure his mother

6
Name of anime space dragon movie
14
Anime about a boy and a girl who ride ostrich-like creatures through a valley
5
1990s anime with Spaceship shaped like a white dragon and has guardian manned robots?
4
Anime/cartoon: Tony and his 2 companions find the gems that fit into the legendary book
2
Adult Swim anime movie had people in robots fighting kaiju-like creatures
8
Anime movie about space aliens and robots
1
Movie with dragon and thing that looks like Godzilla