Cartoon/anime about a giant robotic fish in the sky

I remember seeing this at least 15 years ago. Don’t know if it was anime or cartoon.

It had islands that float in the sky. Starts when this kid's island is eaten by a giant robotic fish that swims in the sky. He is rescued by a big airship that is trying to destroy the fish piloted by an older man and his daughter or granddaughter. At first they fly around in wing suits but at the end of the movie they create an airplane to fight the fish.

The name Sky Soldiers sticks in my head but I cannot find it anywhere.

From the jacket below, which features a robotic-looking fish (and what do you know, it's got Mark Hamill in it!):

In a world beyond imagination where fantastic tree villages float in mid air, a young boy named Joshua dreams of adventure. Forced from his home by an evil mechanical beast called Nemeclous, he discovers a fantastic world high above the clouds. There he must join an elite force - the Aero-troopers - who are sworn to protect the skies. Joshua now finds himself on the kind of adventure he has always dreamed about... but little does he know the entire fate of the skies lies in his hands. 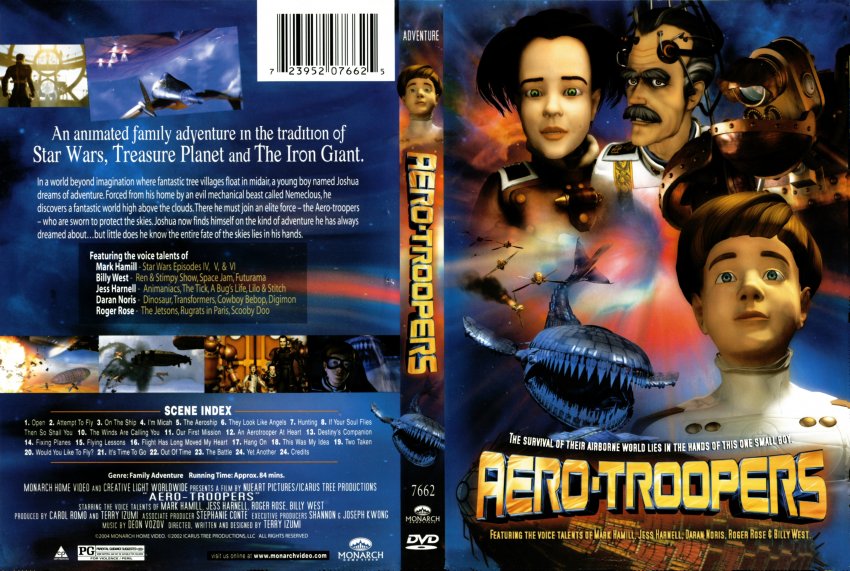 The follwing demo video contains various clips from the movie, including some wingsuits at 3'25. A comment by the poster (who apparently worked on the movie) explains it was made with the 3ds Max animation software.

Found with the Google query anime "floating islands" "robotic fish" which returned this Reddit thread on which someone (you?) commented:

I have been searching for this same anime. they end up fighting a big robotic fish that eats the floating islands. I cannt find it anywhere, and I thought the title was "aero soldiers".

Aero Soldiers + Sky Soldiers + a Thesaurus lead me to Googling "aero troopers" on an off chance, and jackpot.

2
Anime about guy with a unique robotic arm
2
Can anyone find this anime/cartoon?
7
Mecha anime with giant robots summoned from sky, water and earth
6
Anime/cartoon about various gems giving powers to their holder
8
Cartoon or anime about people with elemental powers who could see auras
7
Anime/Cartoon with a Giant Police(?) Robot
3
Anime/cartoon where the main cast uses 2 golden coins to summon a mech from the sky
4
Anime/cartoon about two kids trying to depetrify all humans