Relation between love and Patronus

In the movie Deathly Hallows 2, after Voldemort kills Harry, we see Harry speaking with Dumbledore about Snape's Patronus matching Lily's.

We're lead to think from the conversation the reason for that to happen is because Snape was in love with her (that was discussed in other QAs).

When reading about Patronus:

Each Patronus is unique to the witch or wizard who conjures it, and it’s possible, in some cases, for a Patronus to change.

The information present in Pottermore appears to be wrong as both Snape and Lily have a doe, therefore it is not necessarily unique.

I wonder... is there any relation between loving someone and having the same Patronus or Snape and Lily were the exception to the rule? Is the information present in Pottermore necessarily true?

I mean, if the relation exists and if what they say in Pottermore about Patronuses being able to change is true, then this can have subtle implications.

Patronuses can change to match someone else’s due to love, but only if it’s undying permanent love, not a fleeting infatuation. J.K. Rowling mentioned on Twitter that a Patronus only changes due to love if it’s eternal, unchanging love. 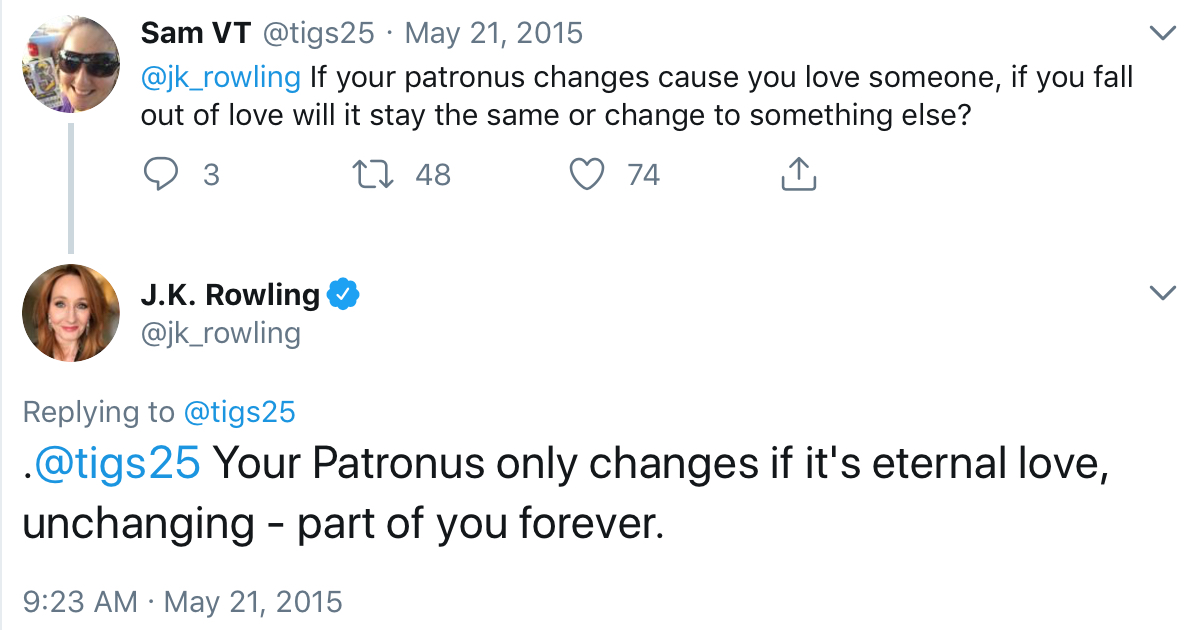 @tigs25: @jk_rowling If your patronus changes cause you love someone, if you fall out of love will it stay the same or change to something else?

She also mentioned in an interview that often a Patronus will change to the shape of the love of one’s life because that person often becomes the happy thought used to conjure a Patronus.

Chely: James patronus is a stag and lilys a doe is that a coincidence?

J.K. Rowling: No, the Patronus often mutates to take the image of the love of one's life (because they so often become the 'happy thought' that generates a Patronus).
- Bloomsbury Live Chat (July 30, 2007)

More generally, as Lupin tells Harry, Patronuses can change because of a shock or emotional upheaval, though in those cases they presumably wouldn’t change to match someone else’s.

“Tonks’s Patronus has changed its form,’ he told him. ‘Snape said so, anyway. I didn’t know that could happen. Why would your Patronus change?’

Lupin took his time chewing his turkey and swallowing before saying slowly, ‘Sometimes … a great shock … an emotional upheaval …”
- Harry Potter and the Half-Blood Prince, Chapter 16 (A Very Frosty Christmas)

This doesn’t contradict the idea that each Patronus is unique. Though wizards may share the same Patronus animal (which may be because they’re in love, similar, or just by coincidence since there are only a certain number of animal species), each Patronus is still unique. Just as each individual living animal is unique, and not exactly the same as any other members of its species, each Patronus animal would still be different than other Patronuses of the same creature.

Each Patronus is symbolic of the caster, with the corporeal form of a Patronus saying something about the nature of the caster and/or their relationships (romantic or otherwise), although some people share the same animal for their Patronus even if there is no link between them (e.g. McGonagall and Umbridge).

The article not only suggests that a Patronus can change to display love, but also to display a bereavement or other large life change. The article also affirms each Patronus to be unique.

Given their long affinity with humans it is perhaps unsurprising that among the most common Patronuses (although it must be remembered that any corporeal Patronus is highly unusual) are dogs, cats and horses. However, every Patronus is as unique as its creator and even identical twins have been known to produce very different Patronuses.

Presumably, this means that while Remus and Tonks both have a wolf Patronus, if you were to examine them closely they wouldn't be two identical wolves, and McGonagall and Umbridge aren't using the same cat (i.e. the Patronus doesn't have, say, 100 animal avatars to choose from and people with the same Patronus share that avatar - instead the corporeal form is uniquely constructed from an individual's psyche).

A Patronus requires happy memories and the caster’s ability to recreate the emotional stimulus and infuse his or her entire presence with said reproduced emotion. The idea of swapping the emotional component of the spell for love has not been explained or fleshed out in canon that I can recall but has been explored in the fandom realm in numerous fan fictions. Varieties include a solid golden Prongs who could destroy the dementors and other creatures of sheer evil construct to a completely different avatar based on the type of love etc.

In this excerpt from Pottermore

Extract from Harry Potter and the Prisoner of Azkaban by J.K. Rowling

‘So...’ Professor Lupin had taken out his own wand, and indicated that Harry should do the same. ‘The spell I am going to try and teach you is highly advanced magic, Harry – well beyond Ordinary Wizarding Level. It is called the Patronus Charm.’ ‘How does it work?’ said Harry nervously. ‘Well, when it works correctly, it conjures up a Patronus,’ said Lupin, ‘which is a kind of Anti-Dementor – a guardian which acts as a shield between you and the Dementor.’ Harry had a sudden vision of himself crouching behind a Hagrid-sized figure holding a large club. Professor Lupin continued, ‘The Patronus is a kind of positive force, a projection of the very things that the Dementor feeds upon – hope, happiness, the desire to survive – but it cannot feel despair, as real humans can, so the Dementors can’t hurt it. But I must warn you, Harry, that the Charm might be too advanced for you. Many qualified wizards have difficulty with it.’ ‘What does a Patronus look like?’ said Harry curiously. ‘Each one is unique to the wizard who conjures it.’ ‘And how do you conjure it?’ ‘With an incantation, which will work only if you are concentrating, with all your might, on a single, very happy memory.’ Harry cast about for a happy memory. Certainly, nothing that had happened to him at the Dursleys’ was going to do. Finally, he settled on the moment when he had first ridden a broomstick. ‘Right,’ he said, trying to recall as exactly as possible the wonderful, soaring sensation in his stomach. ‘The incantation is this –’ Lupin cleared his throat, ‘expecto patronum!’ ‘Expecto patronum,’ Harry repeated under his breath, ‘expecto patronum.’ ‘Concentrating hard on your happy memory?’ ‘Oh – yeah –’ said Harry, quickly forcing his thoughts back to that first broom-ride. ‘Expecto patrono – no, patronum – sorry – expecto patronum, expecto patronum –’ Something whooshed suddenly out of the end of his wand; it looked like a wisp of silvery gas. ‘Did you see that?’ said Harry excitedly. ‘Something happened!’ ‘Very good,’ said Lupin, smiling. ‘Right then – ready to try it on a Dementor?’

It would be interesting to explore the arithmantical properties of the spell and see if supplying different strong emotions would affect the overall impact of the spell. JKR never really fleshed out the advanced structuring of spells or spell creation nor truly explained the spell analysis methodology of arithmancy enough to do so from canon. Or at least to my knowledge. It was not an integral part of the story so she most likely never needed to further explain it. Hermione may have been able to do well in the class but even she was no expert like Bill or Fleur would have been. Spell creation is danegerous to even experienced witches or wizards. Look at Luna Lovegood and her mother Selene. One wrong move and Selene was vaporized and the backlash permanently scrambled some wires in Luna and Xenophilus headsets so to speak.

Arithmancy In the Muggle world, arithmancy is the practice of assigning numerical value to words for the purpose of divination. Although not much is known about the arithmancy taught at Hogwarts, it can be presumed that the wizarding world practiced the same thing. In Hermione’s words, it was ‘predicting the future with numbers’, and was her favourite subject. Taught by Professor Vector, it involved a lot of complicated homework and was a necessary subject for anyone hoping to ever work as a curse-breaker at Gringotts bank. Bill Weasley must have aced it, then.

That is about as much as I can find in canon but the 800,000+ fan fictions have lead to some interesting non canon explanations and applications from it being a base 7 mathematics to creation of software that can analyze and break down the numbers created during the spell analysis and note similar algorithms and categorize them so one can swap various portions with others and subsequently alter the spells structure and overall effect. (I would reference a few of the better ones but again there are too many fics with 100k words or more to search for quotes. If anyone else has specific explanations or examples in mind please post as comments)

There is definitely a relationship as Tonk's patronus became a wolf, symbolic of her lover Remus Lupin who was a werewolf and had a wolf patronus.

Not the answer you're looking for? Browse other questions tagged harry-potter patronus-charm or ask your own question.

-4
How come Snape and Lily have the same patronus?

14
If it wasn't for his love for Lily, would Snape have a Patronus?
15
In which situations does a wizard's patronus change due to love?
20
Was Lily Potter's Patronus always a doe?
7
Why did Lupin not tell Harry that patronuses take animal forms?
41
Did this character deliberately let Harry see his memories when dying?
10
What are the known memories used to conjure Patronuses?
1
Why a Doe symbolizes Snape's love for Lily when in fact it symbolizes the tragedy of his life?
33
Was Shacklebolt's Patronus the only one that spoke?