Are the Narnia books and Harry Potter set in the same fictional universe?

I've noticed many similarities for example:

I'm sure there is more I haven't listed, But, is Narnia the same fictional universe as Harry Potter or a different universe entirely?

No. In the world of Narnia magic can be learned (and used in a haphazard fashion) by those without magical blood. In the world of Harry Potter, it's exclusively used by humans with magical ancestry.

"I see," she said scornfully, "you are a Magician—of a sort. Stand up, dog, and don't sprawl there as if you were speaking to your equals. How do you come to know Magic? You are not of royal blood, I'll swear."

"Well—ah—not perhaps in the strict sense," stammered Uncle Andrew. "Not exactly royal, Ma'am. The Ketterleys are, however, a very old family. An old Dorsetshire family, Ma'am."

"Peace," said the Witch. "I see what you are. You are a little, peddling Magician who works by rules and books. There is no real Magic in your blood and heart. Your kind was made an end of in my world a thousand years ago. But here I shall allow you to be my servant."

That in itself indicates that these are not set in the same fictional universe.

With regard to the similarity of the lions, you should be aware that both the Narnia shields and the lion depicted on the Gryffindor banners are not original creations. They're representations of a heraldic "Lion Rampant" which goes back to at least the 1400s (and before). Most depictions after the 1800s follow an extremely similar pattern to those seen in various fantasy books/films including Narnia and Harry Potter 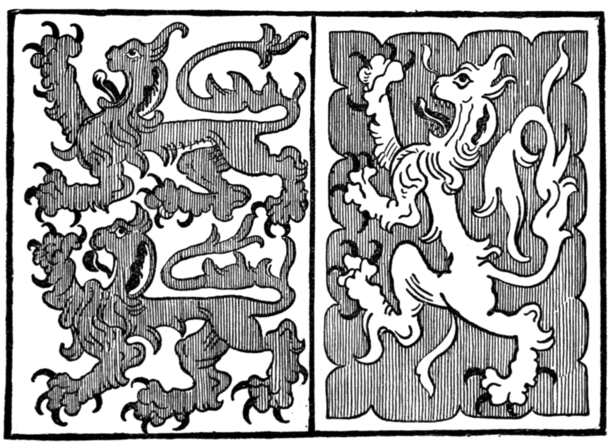 Arms of Strange and Talbot - Catalogue of the Heraldic Exhibition in London, 1894.

I found myself thinking about the wardrobe route to Narnia [in the C.S. Lewis series including The Lion, The Witch And The Wardrobe] when Harry is told he has to hurl himself at a barrier in Kings Cross Station - it dissolves and he's on platform Nine and Three-Quarters, and there's the train for Hogwarts. Narnia is literally a different world, whereas in the Harry books you go into a world within a world that you can see if you happen to belong. A lot of the humour comes from collisions between the magic and the everyday worlds. Generally there isn't much humour in the Narnia books, although I adored them when I was a child. I got so caught up I didn't think C.S. Lewis was especially preachy. Reading them now I find that his subliminal message isn't very subliminal at all.

Really, C.S. Lewis had very different objectives to mine. When I write, I don't intend to make a point or teach philosophy of life. A problem you run into with a series is how the characters grow up ... whether they're allowed to grow up. The characters in Enid Blyton's Famous Five books act in a prepubescent way right through the series. In the Narnia books the children are never allowed to grow up, even though they are growing older.

"The story behind the Potter legend: JK Rowling talks about how she created the Harry Potter books and the magic of Harry Potter's world,"

The Harry Potter universe and the Narnia universe are separate universes.

There are many in and out of universe things to, so to speak, prove this, but I'll only list a few.

Even beyond that the "similarities" you've listed aren't really similar:

First of all, IIRC Rowling never mentioned being inspired by Lewis. Moreover, Narnia universe was created something like 50 years prior to Harry Potter universe, so technically it would be other way round (but it's not really the case).

Also, all of the "similarities" you list seem to be coincidental or not a similarity at all.

There is also different underlying references throughout the series: while Harry Potter's arc with Voldemort and Death Eaters has a lot in common with Hitler and Nazi's view of the world, Narnia has more of a Christian theme.

Not the answer you're looking for? Browse other questions tagged harry-potter the-chronicles-of-narnia or ask your own question.

12
Is There Any Connection Between Lily Evans Potter and the Weasley Family?
34
What Percentage Makes Someone a Half-blood?
29
Can a Muggle do anything with a wand?
9
Is love magical for Muggles as well?
24
What is the provenance of this Harry Potter and the Chamber of Secrets quote
156
In-universe, is Aslan actually Jesus?
13
How were there so many couplings between Witches/Wizards and Muggles?
12
Can tapestries move in the same way that photos and paintings can?
6
In the Harry Potter universe, are snakes magical creatures?
2
Were all the main events/places in the Harry Potter universe set in Britain/UK?