Fantasy short story collection, including a fire salamander girl, a were-cougar, an anxious girl turned into a rat, and maybe a half-bigfoot girl

So, I'm looking for the title of a short story collection. I'm going to briefly describe a couple of the stories:

This book was sold at Ollie's Bargain Outlet a couple years ago, it was kind of thick, perhaps 3 inches wide, and it had a green dust jacket. I believe there was a cougar or perhaps a bear in front of trees with a human next to it. Non-realistic artwork, but well done.

This review matches a number of the stories you mentioned.

A fire salamander girl getting stolen and taken to hell, where her creator had to rescue her.

Marly Youmans’ “The Salamander Fire” takes us through farmer’s markets, the mysteries of glassblowing, love and hell in an odd blend of the myths of Pygmalion and Orpheus. Youmans may try to cover too much territory in a short story: there’s all the meat of a novel in here: but if so, there are far worse faults.

A were-cougar (?) has a child with a man and leaves him.

With the dispassionate eye of a cat eviscerating its mouse, Tanith Lee tells a story of love and disillusionment in “The Puma’s Daughter”. An arranged marriage to a lovely were-cougar takes a very decent young man outside his familiar community — and outside the bounds of his reality — leaving us to judge for ourselves just who (if anyone) has really been wronged. There are two sides to almost every troubled marriage, and Lee very carefully delivers no auctorial verdict to simplify things for us here.

A modern girl talks with Ganesha and his rat and maybe goes on a ride down a New York Highway with him.

Meanwhile, Jeffrey Ford’s odd and delightful “Ganesha” is the only story I’ve ever read of the Hindu deities that treats them with such a blend of whimsy and reverence. His author’s note informs us that a writing student from India told him, “If you write with an open heart, Ganesha will accept it.” And the evidence at hand shows plainly that he took that advice to (open) heart. Gods, demons and the roots of artistic development collide gently and wildly in this off-beat little tale of teen angst.

I believe there was a cougar or perhaps a bear in front of trees with a human next to it. Non-realistic artwork, but well done.

The cover does have a bear and a girl in a forest. It's quite gorgeous. 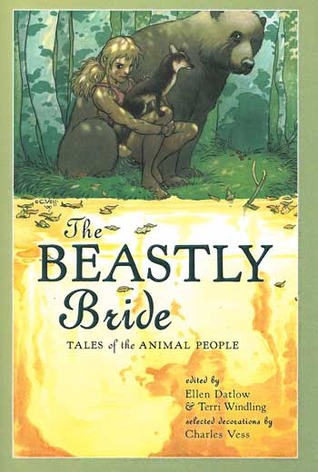 Found with the Google query fantasy short story collection "salamander" "were cougar" which returned the above review.

Not the answer you're looking for? Browse other questions tagged story-identification urban-fantasy anthology-book or ask your own question.

12
Short story (maybe two in the same collection) about Alien education versus Earth
4
Short story collection about were-creatures and shapeshifters
10
Looking for an old fantasy short story and novel, maybe published by DAW, about a trip into a hellmouth?
9
SFF Short story anthology: girl named Willow restores planets, and unicorns create balance in the environment
10
Looking for a short scary story book! A girl (Chloe) is turned into a cat and stoned?
6
Novelette/short story about a rat/mouse turned intelligent by aliens and then left behind when they leave
7
Child's picture book; fantasy story with a green lizard in human clothes
6
Looking for an older maybe 20 year old Mech Anime