A fantasy adventure book based on Old Greek Myths and Medusa

The book was probably made in the 1990 or 1980. on the cover is a man in dark clothes with dark hair holding a medusa head at the head of a table during a feast while everyone turns to stone. Including a Fat King and a girl holding a wine jug.

In the book it talks about a kid who works in the kitchen and his sister who serves wine to the King. Included are the cook. One day this man comes into the mansion/castle and turns everyone at the party to stone as an act of revenge. the servant boys asks that he turn his sister back. the Man replies that while she was an unintended consequence of his revenge he regrets nothing, and leaves the castle.

The remaining servants then smash the rich people at the table and break of the fingers of the king to rob them of their jewels. The servant boy loads up his sister onto a cart, while she still has the metal jug in her hands and gets wine poured on him in the process. the cook helps. Everyone runs away.

At first they go by ship to another land, purchasing passage with their stolen loot. Later they are left on an island after a storm because the sailors think they are cursed, taking the stone wine jug girl as part of their payment. the captain apologizes as they leave, gives them some supplies, but leaves just the same. The servant and the cook eventually make it to the otherside of the island where a damaged boat waits to be repaired. But in order to get out they have to get past a seven headed monster that bites off a man each, hiding in the rocks on the way out of the bay.

There are about half a dozen people marooned on this island, including a young girl. they have to wait months to gather enough fish and supplies before they can leave. including creating some dummies with sticks and seaweed and glue to trick the monster in the walls. They hide under the boat while the dummies get eaten, but the mast of the boat is broken.

There's also a monster that lives on the ocean that creates a whirlpool as it swallows fish and ships.

Eventually the servant-boy, now a man, and the girl, now a woman, so about 18 years old now, find the wine jug servant girl, and since nothing can be done about her, the brother makes a nice shrine for her to stay in on the edge of the sea. They also get married.

That's about all i remember.

You can tell that it borrowed a bit from various greek tales but it has almost nothing to do with them.

Singer to the Sea God by Vivien Alcock

A grand adventure set in ancient Greece. One look at Medusa, and Cleo turns to stone. Phaidon cannot leave Cleo behind when he escapes with his uncle and two other slaves. But the sea trader who has helped them now abandons them, taking Cleo with him. Marooned on an island haunted by strange echoes, they face the greatest test of all in trying to get back to the mainland. 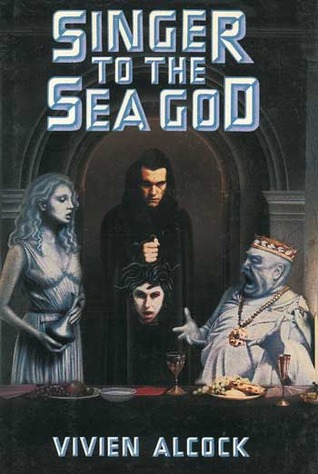 Not the answer you're looking for? Browse other questions tagged story-identification books childrens-novel or ask your own question.

10
Identify horror film/TV show where protagonists ostensibly hunting a Gill-Man are transformed into same
7
Book where a young butcher's son was the long lost heir to an empire
4
Series of books; in one there is an island with very tall large pillars
5
late 19th century story about 2 men canoeing down a European River, put their lives in peril by camping on an island with alien or inhuman beings
9
Novel about a girl living in submarine, becomes fish if water touches her?
4
Sci-fi book involving an EMP event with man in Alaska with his family back in the lower 48
13
Fantasy/magic book with female protagonist and a misogynistic villain in a ringed city