The series featured human characters, a man & woman, helping an intelligent alien T-rex-like female dinosaur who may have had wings. They were on the run from someone through space. This group was possibly a galactic patrol force of some sort that one of the humans had once been a member of. There was also an Earth T-rex of normal dinosaur intelligence. I'm unsure how he was obtained but the alien T-rex still liked him, was a possibility of breeding with him as I recall. The male T-rex was kept restrained to keep him from harming the rest on the spaceship. This book was part of a series of books of which I only ever read the one, it being I think part 3 and would have been printed sometime before 1977. It seems to me the cover depicted the normal T-rex collared and chained. The winged (?) alien T-rex was there as well along with perhaps a jagged alien landscape and a spaceship. It was not Anne McCaffrey's Dinosaur planet series, Ray Bradbury's Dinosaur Tales, Harry Harrison's West of Eden or David Bischoff's Dragonstar series.

Having found an image of the book, this fits your description so I will change my comment to an answer. Although not a (long) series as far as I know, the T-Rex characters could be from The Second Experiment by J O Jeppson (Mrs Asimov). The book was published in 1974 and there was a sequel 'The Last Immortal'. 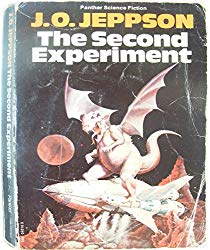