The Tree of Applejack's Parents?

At the end of "The Perfect Pear" episode of My Little Pony: Friendship is Magic, the Apple family somehow spot a tree that sprouted from Bright Mac and Buttercup's seeds at one of the local orchards --presumably near Sweet Apple Acres.

My question is, how didn't Granny Smith, Applejack, or anybody else come across this sooner?

I don't think this specific plot element has never ever been directly addressed by the writing staff - for example during an interview or an episode audio commentary, so once again I doubt an official proven answer exist.

Anyway, I would point out that if you actually take some time to fully analyze the full picture the fact that the tree wasn't never pointed out before isn't as much unbelievable as one may initially think. Let me explain...

Firs, let's consider the relative placement of the two farms.

Goldie Delicious: Oh, well, I don't know about that, little one. But if it's a story you're after, I suppose you have a right to know. Now, let's see, I got a stack of books here someplace... Oh! Apple Family History, Volume 137! Hmm, hmm... Here we are. "Feud with the Bears". I mean, "Pears". My eyes ain't what they used to be. A long time ago, Sweet Apple Acres wasn't the only farm in Ponyville. In fact, there was another one just right next door.

As Goldie clearly states, the two farm were actually adjacent. It is already pretty obvious by the pictures in her book, but you can confirm again every time the border between the two farms is actually shown. 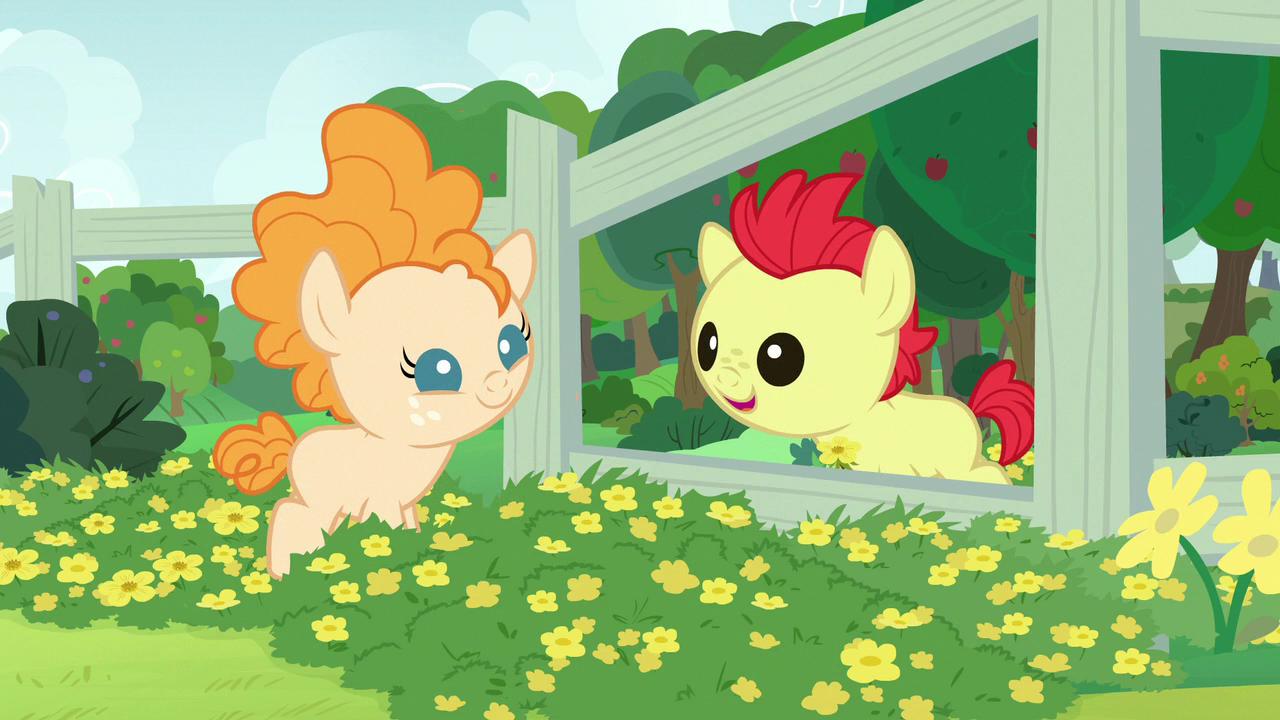 So - we can make a first important statement: the two farms are adjacent. A fence runs along the border. Take notice of the fence - it will be important later.

Next.... the area that Bright Mac and Pear Butter usually went to... 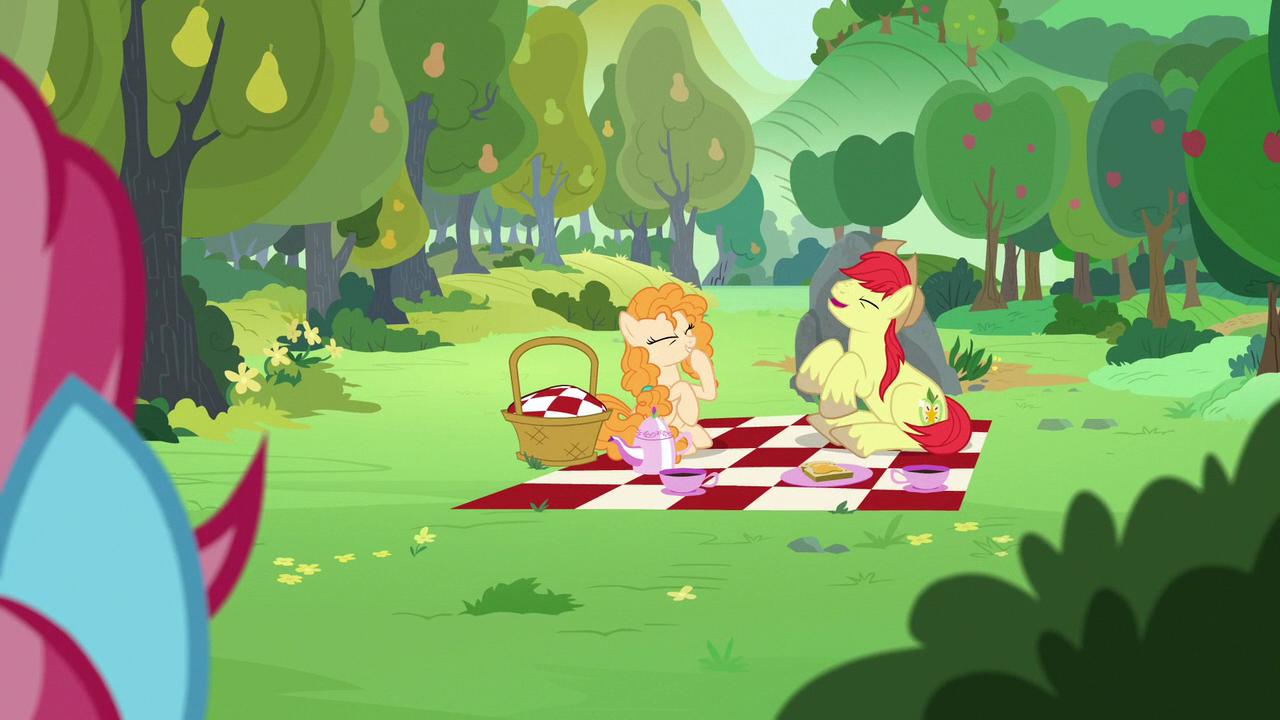 If you notice, the area from the picnic scene has pear trees on one side, apple trees on the other but no fence in the middle. The hills, usually pretty far in most depiction of Sweet Acres, are here pretty close. 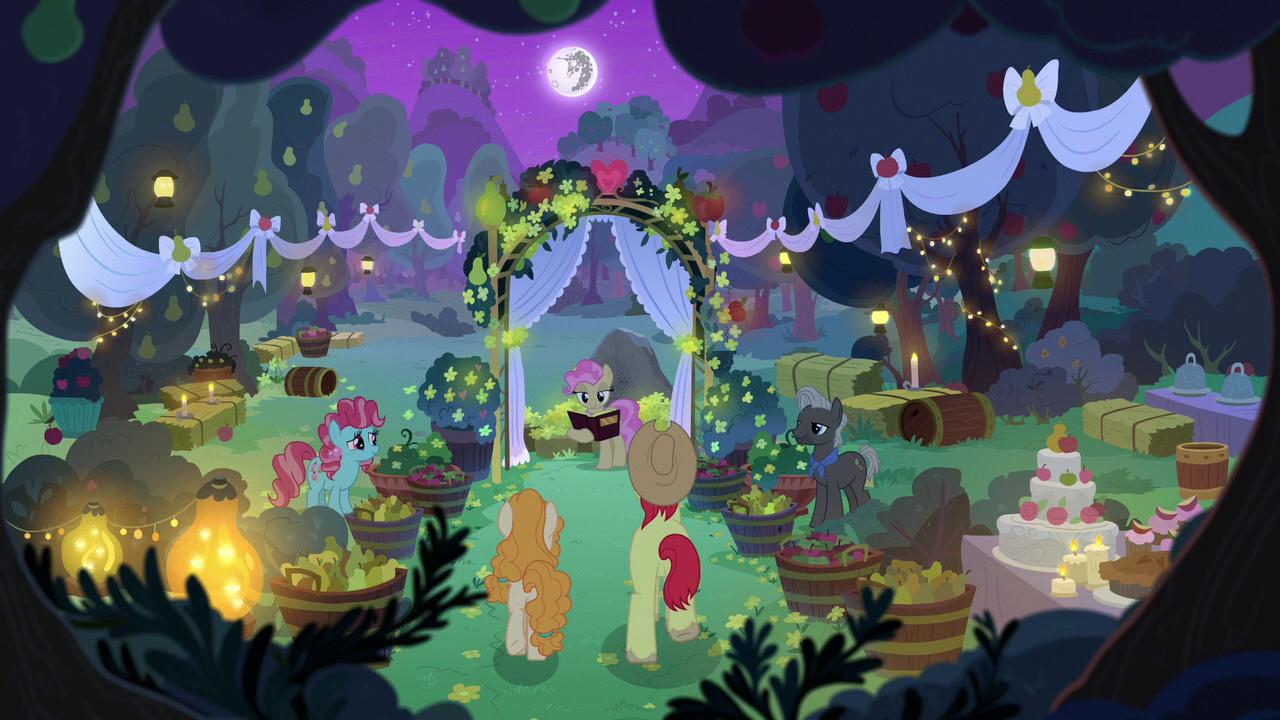 it is the same rock from the wedding scene, so the area is still the same. Why is that important? Because it means that it is an area Granny Smith used to visit - after all she shows up during the pic-nick scene before!

But then... why it is not fenced? Most of the depictions of the farms border we see during the episode have a fence in the middle (and where there isn't a fence an actual road is in its place...) so why not here?

My view is that the wedding field may not be inside any of the two farms. Yep, we see fruit tree on the two sides... but that doesn't mean we are inside the farms border.... it may be a close-by field - seed getting spread by animals wouldn't be so uncommon, and it is somehow appropriate to think that areas near the farm border are still full of apple/pears trees. So, at best the wedding area is outside the farm. At worst it is alongside the border on the farest end of Sweet Apple.

If we accept this... the plot doesn't sound so implausible.

Granny Smith probably never saw the tree because she never went there again. Remember: she....

Applejack: Listen, sugarcube. Anytime Big Mac and I ever asked Granny about the feud or the Pears, she'd get so upset she couldn't talk. Best not bring it up.

AJ is scared to even let Granny see a Pear Jam jar... I doubt Granny ever went near the pear trees during that time, especially pears trees that are outside Sweet Acres borders.

AJ and Big Mac.... may have seen the tree but probably wouldn't make the connection at the time. And while it may seem an odd tree... again, would they risk asking Granny? As the episode shows, they are somehow comfortable with avoiding digging up the truth to avoid annoying her.

The only one remaining is Apple Bloom, but she is also by far the more likely to simply never have gone that far before. The field does indeed seems to be somehow distant from the far, more close to the hill so... you could easily accept that she never went there before.

As for the Mayor and Mrs. Cupcake... they probably knew all along and may even be the one that took care of the tree so far.
Remember: the episode never clarify what happened to AJ, Mac and Bloom parents but it does indeed play along with the common headcannon that claims them to be dead. Granny Smith angers ties into that too, to the point that it seems reasonable to think that she is mad with Grand Pear not only because she left his daughter, but also because he wasn't there when something happened to her. If this is true and we are to assume a tragic end for Pear Butter (which again is also very probable since the whole story sound very like Romeo and Juliet) I would again say it is very probable their closest friend wanted to keep their memory by taking care of "their" tree.

So, I would say that the story isn't so unbelievable as it first sound. If anything what seems missing is Mrs. Cupcake and Mayor Mare being at the tree in the final scene too.

18
What's the explanation for Luna's change in appearance?
10
Why do the Cutie Mark Crusaders live with their sisters instead of their parents?
4
On which episodes the Royal Wedding Castle Playset is based?
8
Do any of the other “Mane Six” have surnames?
3
Why do the Apples have such a strong accent?
2
Why are the pony engineers pulling the train in Over a Barrel?
2
Can multiple ponies have the same special Talent?
5
Who are the two yellow mares in the season 5 poster?
3
Does Scootaloo have biological parents or is she adopted?