What was the Hookah-Smoking Caterpillar smoking?

Certainly the poster child for drug reference fantasy stories, did Lewis Carroll ever reveal just what his 3 inch long blue "Hookah-Smoking Caterpillar" character smoked in his bubble pipe while giving advice to Alice in 1865's "Alice's Adventures in Wonderland", or was it left up to our collective imagination? 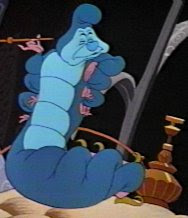 Hookahs are designed different than bongs. Rather than lighting the substance on fire you use coals to heat the substance. 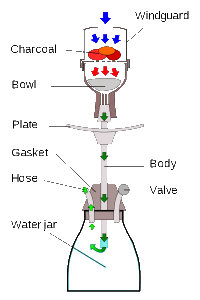 Most hookahs are used to smoke flavored tobacco rather than marijuana, but due to the chemicals and the shear volume of smoke a person can consume over smoking a cigarette, the effects are quite different than regular smoking. Although my "stoner" friends say it was "pot" the caterpillar was smoking, I have no reason to think it was anything other than the normal substance they used in a hooka back then and today.

Your question sent me off to read about the history of marijuana smoking in England, though I haven't found much reliable information. From Wikipedia I could find a study, prompted by certain phrases used by Shakespeare in the 16th/17th century, finding traces of cannabis in pipes buried in Shakespeare's home town:

Why write I still all one, ever the same,
And keep invention in a noted weed,
Shakespeare, Sonnet 76

However, even if this does indicate that marijuana consumption wasn't unknown in England before Carrol's days (which it does very weakly) it still doesn't imply that Lewis Carrol himself smoked marijuana (despite extremely flaky claims such as the fifth paragraph here), or that he was familiar enough with the habit to insert it into his rather hallucinogenic fantasy world.

Some googling for "lewis carrol marijuana" and variants thereof led me to many "Was Lewis Carrol advocating marijuana usage?" pages, but nearly all were on marijuana and cannabis advocacy sites that don't even try to present any evidence (see here or here).

In short, since tobacco smoking was well-known and popular in Victorian England, and the hookah was becoming known after the conquest of India, I see no reason to assume cannabis was in the caterpillar's hookah.

That is not to say that evidence for other hallucinogenic drugs can't be found. This is just my 15 minutes' worth of research. :)

Lewis never said. The illustrator in the original Alice In Wonderland put tobacco plants - you can tell by the flowers - next to the caterpillar. I don't think there was any intention to suggest anything else.

(What Disney may have intended to suggest - who knows.)

The Caterpillar is most likely smoking opium. Carroll never states this in any of the three Alices (Underground, Wonderland, Nursery), but he does offer some clues. In Underground, we are told that “...her eyes immediately met those of a large blue caterpillar, which was sitting with its arms folded, quietly smoking a hooka, and taking not the least notice of her or of anything else (p. 26, original pagination). From here it is notable that time seems to slow down drastically, and we are soon told that “...the caterpillar took the hooka out of its mouth, and languidly addressed her” (p. 26). The above is repeated in Wonderland, but this time the Caterpillar “addressed her in a languid, sleepy voice.” (p. 59, original pagination). The word “languid” probably best describes the state of an opium user, as opposed to the state of any other person under the influence of different drugs.

Opium I bet.
I've been watching Alice: Madness Returns and it's a very Chinese oriented, and in the Eastern regions in general it was produced a lot, and of course it started in England.

he was either smoking Shisha (flavored hookah tobacco) or a variety of Marijuana of some sort. it is known that Carrol was a known Marijuana and Opium user, which is where the creativity for the story came from. i should expect that it would be Shisha but we will never really know

4
Did the movie Alice in Wonderland(2010) use live-action?
10
What's the time dilation ratio between Earth time and Wonderland time?
10
Was there a literary inspiration for Lewis Carroll's "Alice in Wonderland?"
23
Why is the raven like a writing desk?
3
What are the references to Alice in Wonderland?
10
What does the Hatter’s “Your hair wants cutting” mean in A Mad Tea-Party